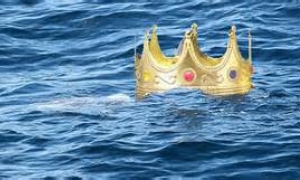 Kaling Wald truly believed that God was going to raise her husband Peter from the dead. The Canadian woman was so sure he’d be resurrected that she left Mr. Wald’s body to decay for six months.

The dead man’s wife held fast to the hope that after his long nap her husband would rise up, walk out of the bedroom, slide behind the wheel of the Jesus ministry-mobile and get back to feeding the homeless, preaching the Gospel, and producing evangelistic skits in the family’s backyard.

While the irreligious might snicker at such a belief, Peter’s family is just like Obama-is-God people, who should be referred to as Obamaholics. Obamaholics still believe that the president, who is actively destroying America, possesses the power to make the oceans recede and heal a sick and dying planet.

Remember when Barack Obama first emerged on the political scene? At the time, the electricity and excitement surrounding the Illinois senator’s potential to perform miracles seemed second only to the time when Scripture tells us Jesus whispered “Talitha cumi” into the ear of a dead girl, and took her by the hand as she rose from her deathbed.

To those on the left, post-G.W. Bush America was nothing more than a rotting corpse, a carcass they believed was in need of a touch from above. Unfortunately for us, the man that nearly half the nation chose to believe was divine was Barack Obama, to whom some diehards, even to this day, still attribute superhuman powers.

Much like Mrs. Wald, who didn’t report her husband’s death because she was “trusting God… [and] thought, ‘OK Lord, you know better’,” liberals, who generally by nature are “tainted and warped [in their] better judgment,” believed and continue to believe that Obama has the miracle-working ability of a god.

And this is not six months later; it’s six years later!

Try as Obama might to muster up a resurrection, there’s been nothing but death and destruction. And despite all the incessant hallowed-be-Obama’s-name hype, with each passing day, the body under the blanket of political spin grows more swollen and putrefied.

After six years of Obama suffocating, strangling, and stabbing his victim to death, the coast-to-coast decomposition has left America in a nearly unrecognizable state. The stench of decay permeates everything from the economy to our healthcare system.

As for Peter Wald, his body was found when the family was being evicted because of failure to pay the mortgage. Regrettably, for Obama disciples, now more than ever, as the nation continues to rot, true believers find themselves still worrying about paying their mortgages and filling their gas tanks.

But in fairness, liberals are not alone. There’s another group of religious types: the pitiful RINOs-will-save-us Republicans, or RINO-philes, who, just like Obamaholics, are also true believers.

RINO-philes are well aware that Barack Obama is powerless to raise the dead. Instead, this group puts their faith in the messianic abilities of right-leaning moderates who they believe will reignite what Obama has snuffed out. Their hope is that RINOs will breathe new life into a withered nation.

The problem is that RINOs-will-save-us Republicans have put their full faith and confidence in the care of a group of spineless politicians who reserve their energy for flipping over in tanning beds. Thus, judging from the establishment Republicans’ lack of will to oppose a renegade president, it’s highly doubtful that this sorry bunch will be resuscitating anything – let alone America.

So a devout Christian’s unwavering faith in a coming resurrection is not unlike the level of faith exhibited by liberals who believe that, in due time, thanks to Barack Obama, America will rise up even better and more progressive than her post-G.W. Bush self. Nor does it differ much from the gullible group who elected lily-livered RINOs, thinking that those who easily cave will do for America what Jesus did for Lazarus.

Superior Court Justice Marjoh Agro said a mouthful when she told Kaling Wald, “Your belief that your husband would resurrect is not an issue. This is not about your religious beliefs. It is about your safety, the safety of your children and the safety of the community at large.”

Likewise, regardless of how misled they are, Obama groupies and the RINOs-to-the-rescue crowd also have a right to their beliefs. But unfortunately for the rest of the country, their politics impact our children’s future and have proven to have a hazardous effect on the community at large.

Today, Kaling Wald has finally accepted the fact that Peter isn’t going to be driving the Jesus ministry-mobile ever again and is mourning the loss of her spouse. Still believing that God can resurrect the dead, the widow maintains that her faith has not been shaken. In fact, she said that the case of the decomposed hubby “has cast [her] more at the mercy of God, because He is the ultimate judge.”

But for those among us who know that Barack “Slayer” Obama and John “No Backbone” Boehner are not gods and therefore incapable of raising America up from the smoldering ash, we can learn from Kaling’s example – the future of America depends solely on the “mercy of God.”