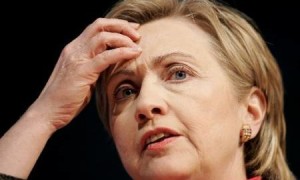 The hope was that the $2,700-per-person invite would attract 125 die-hard estrogen-saturated admirers and that Hillary, who hasn’t been chatting with anyone, would actually lower herself to speak with a few peons.

Unfortunately, not even the promise of a pantsuit T-shirt gift bag was able to entice more than 40 percent, or 50 of the intended 125 invitees. When the tête-à-tête failed to draw in enough women, in desperation Silda extended the ticket deadline, held her nose, and allowed men to be part of the conversation.

In other words, for Hillary, Silda, and 50 other women who wanted to attend a “women only” event – men were an afterthought.

Apparently, Clinton the Cackler loves “Women Only” events, which, to be more accurate, should really be called Ovarian Circles of Solidarity.

Still, it’s hard to know if gender discrimination in the name of the “First Female President” is the way to go at speaking events. That’s why, when deciding who to invite to a Hillary happening, there are a few things to consider.

For one, there is the looming Bill Clinton issue. Hillary, the purported “smartest woman in the world”, probably realizes that having Bill hanging around the elevators scaring the women has the potential to compromise the integrity and seriousness of her bid for the White House and might be something best avoided.

Then there’s the Caitlyn Jenner issue. Jenner, resplendent in a cream-colored bustier, is currently in the throes of a coming-out party on the cover of Vanity Fair. To date, Caitlyn is still the owner of male genitals and, despite his/her long flowing Jessica Lange-lookalike hairdo, if Bruce/Caitlyn were not a Republican and decided to travel to Park Avenue on public transportation to conversate with Hillary, if sitting improperly, he/she could be waylaid for participating in illegal man-spreading.

Either way, when trawling for votes it’s best not to appear transphobic, and in the case of male hormones, no self-respecting phobiaphobic wants to be labeled a testosteroniphobic.

So, swinging wide the doors to a diverse law firm like Akin Gump and allowing in men who want to be women, women who look like men but wear pantsuits and are clearly grappling with their God-ordained sexuality, and everything between was politically expedient.

Ultimately, those conversing with Hillary for $2,700-per-person also got Bill Clinton who, for an extra 50 bucks, probably offered to happily receive all the female attendees with a sloppy wet kiss.

In addition to Bill, Silda introduced Clinton as a “tough, authentic leader” to the likes of Clinton aide Rep. Sean Patrick Maloney and his husband, Randy Florke, both of whom fall into that gray “in between” category; Maurice Tempelsman; Jill Braufman (wife of hedge-funder Daniel Nir); Jean Shafiroff, the person who Bill, if given the choice, would probably prefer to sit next to; and Susan Cole, the woman most likely to be wearing a pantsuit.

Topics Hillary covered in her one-way conversation with herself were “clean energy,” mental health care for college kids, keeping but “revising” ObamaCare, Vladimir Putin, and America’s heroin and meth “epidemic.”

What Hillary chose not to talk about was filthy, philandering ex-presidents and governors, mental health care for sex addicts, how people who flubbed healthcare in the 1990s have no right “revising” healthcare in 2016, and selling uranium to Vladimir Putin.

Because some actual men did attend the event, Hillary skipped her rant on government-funded estrogen-replacement therapy, how to politically castrate an adulterous husband without spilling a drop of actual blood and, in Silda’s honor, black socks and disloyal spouses.

Then, acknowledging the pain the ex-Mrs. Spitzer suffered with Eliot, and appealing to the women in the group, badass Hillary quoted her psychic muse Eleanor Roosevelt, quipping, “Every woman in public life needs to have a husband who frequents prostitutes and a closet full of pantsuits.”

Wait…sorry…that was “Every woman in public life needs to develop skin as tough as rhinoceros hide” – and, when the questions about one’s private life get tough, learn how to hide behind a lie as as big as a rhinoceros.