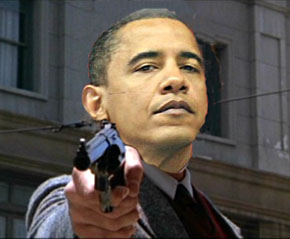 Of late it seems as though liberals on the whole are incapable of understanding how one thing can affect another.  In this case, it’s the holy grail of abortion’s effect on gun violence.

Whether they recognize it or not, liberal ideology has contributed toward America devolving into a macabre death culture, where rooted in the corporate psyche is the idea that expediency trumps the sanctity of God-given life.  The abortion/gun violence dichotomy arises when pro-choice advocates like Barack Obama seek to limit some weapons made of steel but heartily support an industry that also uses steel to destroy innocent life.

In other words, America is again embroiled in a crisis the left has spent decades nurturing but is now seeking to remedy.

Liberals are adamant about funding the slaughter of 4,000 human beings a day.  Meanwhile, those who seek to advance abortion simultaneously insist that guns, which are inanimate objects, are responsible for killing people whom, if they were still in the womb, the left would be more than happy to exterminate.

Clearly this particular cause-and-effect principle emanates from a lopsided philosophy that discriminates with regard to deadly weapons.  If deadly force is administered via a firearm, liberals are irate.  However, if the weapon is a cannula, forceps, or a dilator, liberals are ecstatic.

Meanwhile, society as a whole has been successfully desensitized to casually accept unnatural death.  Secular humanism views euthanasia as benevolent; barely notices when global jihadis behead, burn, and drown Christians; and for the most part looks the other way as the unborn are slaughtered.

Post-birth abortion is now dismissed with a shrug; the sale of baby organs is justified as benefiting the common good; and right-to-death activists like the late Brittany Maynard, who offed herself with a handful of pills, are viewed as somehow heroic.

Sadly, that line of reasoning is likely the driving force behind the sort of violence that causes a shooter like Chris Harper-Mercer to believe that, for whatever reason, he has the right to stroll onto a college campus and blow ten people away.

Moreover, what liberals fail or refuse to recognize is that actively excising God from the public consciousness, systematically equating murder with women’s health, and spending almost half a century pressing for the right to kill eradicate any credibility they may have had concerning the issue of saving lives.

A blurred line between acceptable and unacceptable murder has developed, yet the ones most responsible for the distortion refuse to acknowledge personal culpability.  Instead, the same people directly responsible for cultivating the chaos have appointed themselves the engineers of legislation that does nothing to resolve the moral abyss.

Take for example Barack Obama.  Mr. Obama approves of sanitized violence in an abortion clinic but decries gun violence when the blood is shed on a college campus.

In the president’s mixed-up world of acceptable death categories, biohazard bags are tolerable, but body bags are not; tenaculums are fine as government-funded implements of death, but Thompson submachine guns should be banned.

Pro-death politicians preaching to us about the horrors of gun violence is sort of like listening to a woman with a forehead full of Botox and filler-enhanced lips pontificate about the virtues of aging gracefully.  In fact, when it comes to the issue of gun control, President Obama has mutated into America’s very own Maggie DeBlock.

Maggie is the portly Belgian minister of social affairs and health, who weighs in at close to 300 pounds.  Miss Maggie is to Godiva Chocolate what Obama is to the abortion industry.  The difference between the two public figures is that DeBlock preaches healthy living with chocolate-stained fingers while Obama, with bloodstained hands, denounces murder – but not all murder.

This brand of hypocrisy undoubtedly aids those who feel justified in disposing of other human beings based on a regrettable personal choice or some other distorted reasoning.

Therefore, whether Obama realizes it or not, the blame for mass shootings should be placed not on the Second Amendment or on those who believe that abortion outside the womb is an acceptable choice, but at the feet of those like himself, who condemn ambushing a roomful of people with a gun but openly approve of ambushing a baby in the womb.

It’s secular progressives who have spent 40-plus years dumbing down the public’s definition of murder.  Therefore, what right do abortion advocates have to get indignant when a deranged person with a gun executes a roomful of people?  Especially since, across town, a taxpayer-funded nutcase in colorful scrubs is concurrently using a liberal-approved weapon to ensure that his or her victim is just as dead as the sheet-covered corpses lined up on the gymnasium floor?