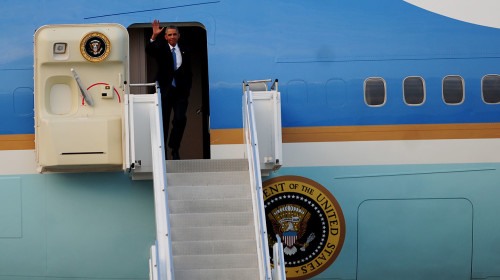 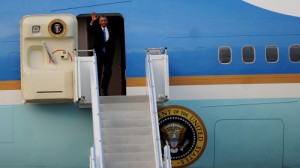 In the year ahead, President Obama has a lot on his plate. There’re gun and climate control; resettling ISIS-infiltrated Syrian refugees in American neighborhoods, protecting Iran from Israel, plans to continue spying on Congress, and above all, maintaining dictatorial jurisdiction over the few remaining freedoms Americans have left.

The thought of it all is absolutely exhausting.

Recently, while rebooting on a $4 million Hawaiian Christmas vacation, Obama, his entourage, large carbon-footprint motorcade, and Secret Service agents, had to get to one of the island’s most elite restaurants, so they “cut … through the Ko’olau mountain range and several micro-climates — sun, fog, rain.”

In other words, the climate/gun control, “share the wealth” president, rounded up his heavily armed security detail, loaded them into The Beast, and proceeded to puff-exhaust fumes through a pristine tropical rain forest to get to a restaurant most of America, especially the 94 million currently out of the workforce, could never afford.

The destination was Hoku’s at Kahala Hotel and Resort, which, according to pool reports, is located in “one of the most expensive neighborhoods in several time zones.”

If it was an “expensive neighborhood” that must mean that there were no women with K-1 fiancée visas, no unaccompanied minors with Enterovirus, and no #BlackLivesMatter types joining in on the Obama family festivities.

Then again, Obama is into income equity and “leveling the playing field” so maybe a few of those plush booths had a smattering of Obama IPhone receivers, a couple of Mara Salvatrucha gang members, and one or two Obamacare recipients?

And if not, then surely the family of Kate Steinle, the woman shot in the back by an illegal felon in the sanctuary city of San Francisco, and the families of the four Marines, and one sailor, shot to death in a gun free military installation in Chattanooga were all there having a bite to eat.

Obviously, they were not.

Instead, Obama, who has already burned through $70 million in vacation funds, and his huge convoy of cling-ons arrived on Sunday, shortly after 6:00 pm. Naturally, the party included first lady Michelle, who, when not dining in tony restaurants recommends Americans surrender a bigger piece of their pie “so that someone else can have more.”

What exactly took 4.5 hours you ask?

According to pool reporters, the group stuffed their maws with “delicacies from around the mainland U.S.”

Hoku’s Restaurant bills itself as one of the finest restaurants on the island, and “is heralded for its innovative fusion fare which melds Hawaiian, Asian, Mediterranean and European flavors,” which covers about three-quarters of the globe. The dinner menu included local fish, Maine lobster, Denver bison and Texas wild boar.
For those who care, that Ragout Texas Wild Boar Shank entrée, which honors the state currently housing 700 “unaccompanied minors,” also at taxpayers expense, comes “Osso Bucco Style,” which the menu suggests pairs well with a “glass of Grenache, Shatter, Rouillison,” which, when it comes to wine is always nice.

Let’s face it; Hoku’s is certainly a far cry from salmon gnawed on by a bear, cooked on a piece of slate, that Obama humbly snacked on, sans a cracker, with Bear Grylls in Alaska a couple of weeks ago.

Even still, the president motoring through a rain forest to spend 4.5 hours eating in a restaurant that screams highbrow elitism, accompanied by heavily armed security, while on a $4-million dollar vacation, is a tad hypocritical. Especially because, when America’s 41,000-tons-of-greenhouse-gas-president gets on Air Force 1 he plans to fly East to push gun control, advance climate change, and impose income guilt upon everyone but himself.