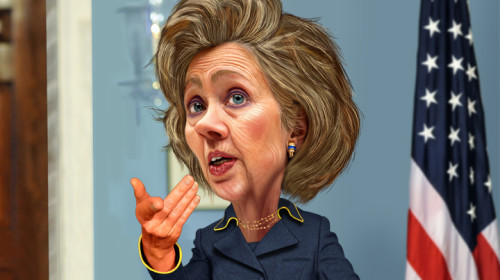 If it’s the aliens that are flooding over the border, Hillary Clinton is correct, “aliens” have already visited planet earth. But if it’s not the foreigners carrying with them Third World diseases and toting along a smattering of ISIS warriors dressed up as refugees, Mrs. Clinton may just need to readjust her tinfoil hat.

Recently, at a campaign stop in New Hampshire, when referring to spaceships that transport space cadets, Mrs. Clinton told the crowd, “I think we may have been [visited already]. We don’t know for sure.”

So, let’s see, in lieu of a 9-year-old with whom to discuss gender pay equity, and for lack of a rape victim in the audience to verbally abuse, Hillary turned to talking extraterrestrials? What’s next, will Hillary prove the reality of the Abominable Snowman and claim she spotted the Loch Ness monster?

In fairness to Hillary though, this particular UFO conversation started up after the “smartest woman in the world” was asked to comment about something Bill said on a late night talk show in 2014 concerning the existence of interplanetary life.

It happened while Bill, whose comment was probably driven by a secret crush on Star Trek Vulcan Sub-Commander T-Pol, was appearing on “Jimmy Kimmel Live.” When asked about life on other planets, Bill said he believed it existed but cautioned, “I just hope it’s not like ‘Independence Day’.”

Picking up where Bill left off, the woman who vows to cure Alzheimer’s and will probably do it by blaming the disease on an anti-Muslim video was asked in New Hampshire about her husband’s comment. In response, Hillary reassured her audience that she would do what Bill failed to do, which was to “get to the bottom” of UFOs.

Does Hillary even know that “getting to the bottom” of something that flies above our heads is hard to do?

Either way; Hillary, who is an expert on every subject, said that the top open-records appeal for information her husband receives at The William J. Clinton Museum/Library, and occasional strip club, involves questions about unidentified objects that fly and otherwise.

Not only that, but also driving the UFO passion is Clinton inner-circle member, former White House chief of staff under Bill, and current Hillary campaign chairman, John Podesta. Hillary claims that Podesta, who looks a lot like an alien himself, is a major fan of UFO theories, which is all a liberal ever needed to invest tax dollars in chasing things like UFOs and unicorns.

Nonetheless, according to Hillary, Mr. Podesta made the presidential hopeful “personally pledge…to get the [UFO] information out, one way or another.”

That’s why, exposing the secret UFO information is an absolute must, and why Mrs. Clinton proposed, “Maybe, we could have, like, a task force to go to Area 51.”

Although Hillary keeps the location of her secret emails under lock and key, at least, if she’s elected president, a federally funded task force will be given the go-ahead to reveal to the world the secrets of the universe.

With that in mind, in an “Orange is the New Black” pantsuit, Hillary Clinton is now officially the political equivalent to Captain Janeway. The problem is that despite wanting to rule the cosmos, Huma says Hillary is “often confused” and based on her spacey comments about UFOs may be Lost in Space too.

Yet even though Hillary the UFO Hunter has “lost her new car smell”, can’t find her husband, or her way back from the little girl’s room to the debate stage, Mrs. Clinton remains determined to become president, after which she’ll immediately “get to the bottom” of the UFO mystery.

How she’ll accomplish that objective is a bigger mystery than the location of those missing emails.

Thankfully, for lack of a spare extraterrestrial hanging around Area 51, if she’s (God forbid) elected, and if all else fails after making these promises, at least Hillary will be able to distract the nation by discussing the other UFO mystery that involved the unidentified flying “lamp/book/ Bible” she once threw at her husband’s head.

And if that doesn’t work, after pandering to one “alien” constituency, Hillary can always pander to yet another alien group by promising ET that if he makes an appearance, and gives credibility to her UFO claim, those who arrive on spaceships will be granted automatic amnesty.