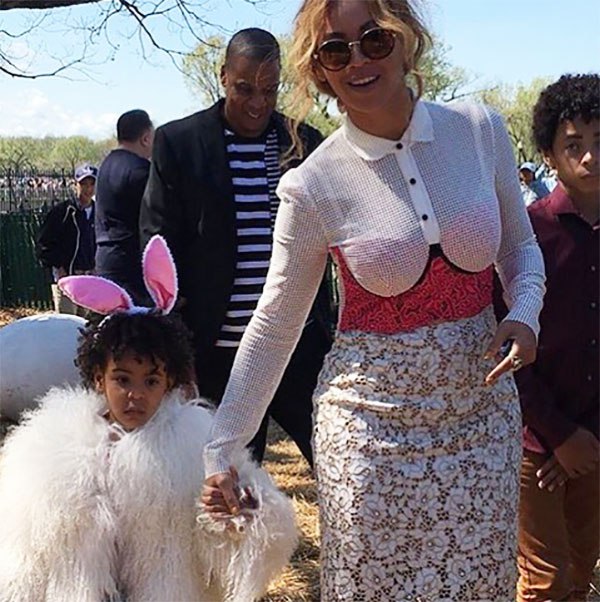 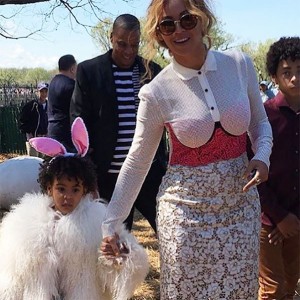 This year, in honor of Easter, Obama and Michelle hosted the 138th Annual Easter Egg Roll on the South Lawn of the Whitehouse. The 35,000-person “Let’s Celebrate!” event had nothing to do with Easter, nor did it have anything to do “egg rolls”.

Nevertheless, the annual festivities, which are secular in nature, feature varied activities and including things like commemorative eggs with Obama’s name inscribed on them, and a story time where the president traditionally reads from Maurice Sendak’s book Where the Wild Things Are.

This year, about a week after ISIS killed 35 people at a Brussels International Airport, Obama, who seemed somewhat complacent after the bombing when it happened, sent a belated scary message to ISIS by acting out Sendak’s book complete with growls and creepy faces.

And although Broadway star Idina Menzel, singer Daya and Echosmith were on hand to entertain the children, the highlight of the day occurred when superstar Beyoncé, her billionaire husband Jay-Z, and their curly-top tot, 4-year-old Blue Ivy, surprised good friends Michelle and Barry by dropping in at the egg roll unannounced.

But now it’s springtime, the bunnies are hopping and Barack and Michelle have just returned from their South America Spring Break trip. So, instead of skimpy black leather, Beyoncé showed up at the White House, dressed in a $3,510 Marco de Vincenzo white lace, see-through skirt, and a cream and pink top that accentuated her ample bosom.

What happened? Didn’t Mrs. Carter hear Michelle’s speech to schoolgirls in Argentina where she talked about being whistled at by sexist men who make women feel as if their bodies have more value than their minds?

Or could it be that Beyoncé likes being half naked because she enjoys being whistled at by men and agrees that her body is more valuable than her mind?

If Beyoncé had been in the audience during Michelle’s Buenos Aires speech would the pop star have even understood what the first lady was talking about when she said:

As I got older, I found that men would whistle at me as I walked down the street, as if my body were their property, as if I were an object to be commented on instead of a full human being with thoughts and feelings of my own. I began to realize that the hopes I had for myself were in conflict with the messages I was receiving from people around me.

Hate to throw a wrench into the Mrs. Obama’s “Let Girls Learn” sexism spiel, but, by flaunting her voluptuous curves for attention, Beyoncé, whom Michelle considers a very good friend, makes a living rejecting all of the FLOTUS’s advice.

Michelle Obama told the Argentinian girls that, as a woman, she wants to be recognized for her intellect. Yet at home, Mrs. Obama idolizes Beyoncé who, onstage and off, shows up everywhere, including an Easter Egg Roll, in see-through, skin-tight clothes.

When not busy rolling hardboiled eggs on the White House lawn or doing the Whip/Nae Nae, has Michelle ever broached the topic of modesty with the woman who shocked the world when she showed up at last year’s MET Costume Institute Benefit wearing a transparent body stocking?

That’s why, based on what Beyoncé doesn’t wear, the pop diva has made it clear that Michelle Obama may talk a good talk when morally chastising men, but in her private life the first lady befriends a woman recognized for something other than her intellect.