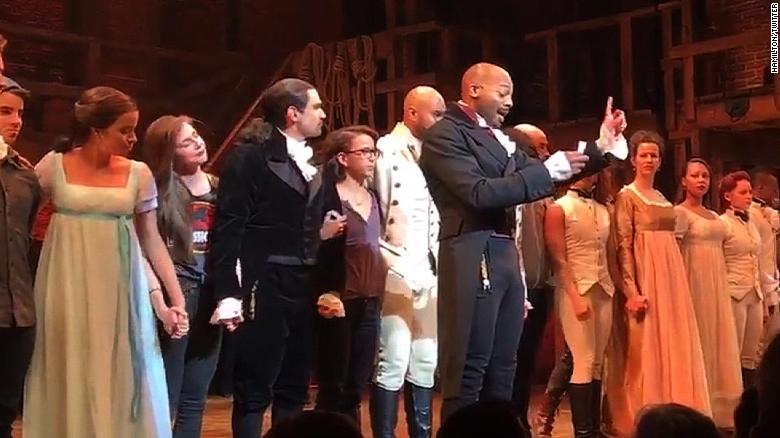 Recently, “Love Trumps Hate” bullies, afflicted with a perverted sense of self-righteousness participated in a weighted battle by luring in, and then ambushing, Mike Pence. It happened when the unsuspecting Vice President-elect decided to take in a leisurely performance of the highly acclaimed musical production of Hamilton.

In addition to incorporating rap, hip-hop, R&B, and pop into the Tony-award winning score, by pretending our founding fathers weren’t white, Hamilton embraces a revisionist version of ethnic and racial history.

In fact, choosing to cast white historical figures with non-white actors may be the reason our racially divisive president is such a huge fan of the play.

In any case, lead producer, Jeffrey Seller, had this to say about Hamilton’s choice to waylay a “Helpless” Mr. Pence:

We had to ask ourselves, how do we cope with this? Our cast could barely go on stage the day after the election. The election was painful and crushing to all of us here. We all struggled with what was the appropriate and respectful and proper response. We are honored that Mr. Pence attended the show, and we had to use this opportunity to express our feelings.

This sort of juvenile sniveling comes from a company of performers that pride themselves on chronicling the grit, bravery, and struggles exhibited by the heroes of our early republic. Therefore, maybe someone needs to inform the cast of Hamilton that a Broadway musical’s purpose is not to make a cowardly partisan proclamation that Alexander Hamilton would probably react to with complete disdain – it’s to entertain.

And so, rather than extol the greatness of American democracy, in response to the Vice President-elect being in the audience, the creator, director, lead producer, and Hamilton cast members collaborated on a message that sought to reaffirm the merits of the racially biased “artistic truth” the play personifies.

Initially, while Pence made his way to his seat, he was subjected to both jeers and cheers. Afterward, rather than remain seated, the governor of Indiana stood in the hallway and listened to the curtain call. It was there that Pence suffered through a discourse delivered by Brandon Victor Dixon a black actor who plays Aaron Burr.

We, sir — we — are the diverse America who are alarmed and anxious that your new administration will not protect us, our planet, our children, our parents, or defend us and uphold our inalienable rights.

Dixon continued, “We truly hope that this show has inspired you to uphold our American values and to work on behalf of all of us.”

After that provocative display of scripted codswallop, the audience responded to the inappropriate singling out of Pence with mixed reviews.

Either way, the cast of the billion-dollar show clearly believes that Trump and Pence require stage actors to instruct them on American diversity, goad them to “work on behalf of all of us,” and remind them to “uphold our inalienable rights.”

What was also apparent is that the left is “alarmed and anxious” because Hillary losing the election portends that the advancement of distorted liberal values is coming to an end.

Judging from Dixon’s soliloquy, it seems as if this imperious band of intolerant hatemongers is concerned that the earth that Obama promised to, but didn’t, heal is now destined for destruction.

Moreover, adding to that growing anxiety is the realization that the children Clinton vowed to abort, the parents whose lives Obamacare put in danger, and the Constitution that the left attempted to shred, may all escape an untimely end.

In the meantime, none of this is a surprise.

Ambushing political adversaries is a technique Barack Obama perfected throughout his presidency. This is a man who mastered the art of inviting spectators to a function and then using the bully pulpit to launch verbal attacks.

What Mike Pence suffered through at Hamilton is reminiscent of the 2010 SOTU where Obama publicly attempted to humiliate conservative members of the SCOTUS.

Following the incident, in a New York Times article, entitled: “Supreme Court Gets a Rare Rebuke, in Front of a Nation,” author Adam Liptak wrote:

It is not unusual for presidents to disagree publicly with Supreme Court decisions. But they tend to do so at news conferences and in written statements, not to the justices’ faces.

Unlike Mike Pence, who smiled and did not respond to the Hamilton criticism, when Samuel A. Alito Jr., who was part of the majority decision, heard what Obama was saying, he shook his head and mouthed the words “Not true.”

The court’s legitimacy is derived from the persuasiveness of its opinions and the expectation that those opinions are rendered free of partisan, political influences. The more that individual justices are drawn into public debates, the more the court, as an institution will be seen in political terms, which was not the intent of the founders.

After Obama’s rant, the left’s response in the House Chamber was similar to the reaction in the Richard Rodgers Theater – liberals in the audience jumped to their feet and gave the political provocateur a standing ovation.

Sadly, for America, just as it is unfitting for a sitting president to publicly rebuke the Supreme Court, a Broadway show about an America’s founder is an equally inappropriate venue to sabotage a future vice president.

But that’s what liberals do.

To guard against retaliation, the left ambushes rivals and subjects them to public ridicule. Then, after openly taunting the defenseless, the offenders rely on the applause of deluded partisans in their midst to lend credibility to deceitfulness, and to justify the ensnaring of political prey.

And so, by masquerading as musical theater, the prejudiced cast of Hamilton attempted to make Vice President-elect Mike Pence the target of a one-sided duel.