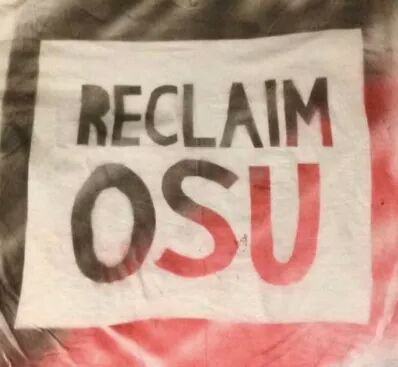 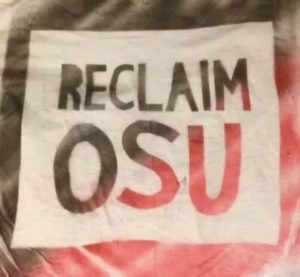 Recently, Ohio State University students participated in a group hug by taking part in a protest to give voice to their disappointment that Donald J. Trump was elected 45th president of the United States.

Two hundred students, faculty, and community activists came together in unity on the OSU Oval at an event organized by a college group that calls itself, Reclaim OSU. “We’re not here to get violent, we’re here to organize,” said Bilal El-Yousseph, a local activist who when not stirring up trouble on campus is posting “Free Palestine” and anti-police rants on his Facebook page.

Besides “F*ck Donald Trump”, “Grab democracy, not pussy”, and “Not my president” were some of the more creative signage paraded around the Oval. Always the gentleman, before initiating a “Fu*k Trump” chant, El-Yousseph, a devout Muslim, apologized for using obscenities that would surely displease Allah.

Among other things, the Down with Trump OSU angry post-election protestors marched for Democrat Party unity, to decry Trump’s proposal to ban Muslim immigrants, to stand with excluded individuals, and to denounce the new administration’s policies, which many rally participants view as racist and xenophobic.

Anti-capitalist lesbian activist Nicolette Yohn of the Multi-Partisan Coalition was part of the event.

Nicolette is a third-year political science and women’s, gender and sexuality studies student who shared, “Personally, I’m directly affected by the decisions of a Donald Trump administration, as a gay woman.”

Nicolette, who has a way with a bullhorn, didn’t exactly elaborate on how Donald Trump would negatively affect her life as a gay woman. However, despite lamenting the danger Trump posed to lesbians, Nicolette seemed totally at ease opposing the president-elect in the company of a Palestinian sympathizer whose religious inclination describes her sexual proclivities as “deviant.”

A few months ago, Ohio State University student activists also expressed their displeasure with law enforcement. By participating in the “March against racist police murder at OSU”, the OSU Coalition for Black Liberation (OSU4BL), and the OSU student organization, brought attention to the life of 13-year-old Tyre King who, after pulling a BB gun from his waistband, was tragically gunned down by Columbus, Ohio police officer.

Maryam Abidi, also a student of women’s, gender and sexuality studies and strategic communication, helped organize the police protest. Ms. Abidi told the OSU College paper, The Lantern that “We can’t just mourn and let it go…it’s important that we hold the cops mother-f—ing accountable.”

So, in addition to dropping “F”-bombs, the anti-cop event ended with a “die-in” where students simulated Tyre King’sdeath by lying lifeless for 13 minutes on the floor of the Ohio Union.

Apparently, there are a number of students at OSU who think that radicals journeying to the US from terrorist states are more tolerable than democratically elected patriots trying desperately to protect Americans from ISIS infiltrated refugees, and law enforcement personnel whose job is to rush into gun-free zones to save the lives of people who hate them.

Nonetheless, being distracted by nonsense could be why, as OSU activists were busy seeking social justice at “die-ins”, adjusting anti-Trump safety pins, and huddling in safe zones, no one noticed that an actual “marginalized” refugee from Somalia, inspired by ISIS, was plotting to mow down and stab those fighting to uphold inclusiveness.

While Nicolette worried about the impact a Trump administration would have on her same-sex lifestyle, Abdul Razak Ali Artan, who became a permanent U.S. citizen in 2014, was ranting on Facebook that he had reached a “boiling point”, referencing “lone wolf attacks”, and paying homage to radical cleric Anwar al-Awlaki.

It’s been reported that Abdul expressed concern about praying in public, but, perhaps, after the fact, open-minded OSU activists could thwart another hostile confrontation by holding open forum on whether or not The Campus Grind food court should integrate Somalian camel jerky into the snack section at Starbucks.

Either way, for lack of camel jerky, Ali Artan, a student who Nicolette and Bilal would likely view as a victim of Trump-style xenophobia carried out an attack by plowing a small gray car, sans a COEXIST bumper sticker, into a campus crowd, before stabbing a few people with a butcher knife that he had grabbed instead of “grabbing pussy”.

Unfortunately for Down with Trump OSU, the Ali Artan car-and-knife attack happened swiftly.

Ali Artan mowed down a dozen people so fast that those concerned about police brutalizing marginalized Muslims were unable to slow down the jihadist by jabbing the tires on his car with safety pins, or “shelter in place” at a campus safe zone.

Thank God for the quick thinking Alan Harujko, an armed police officer. Alan dared to shoot the frenzied jihadist dead with an actual gun, in a gun free zone, turning Ali Artan into a literal participant of a “die-in” by laying him flat out on the sidewalk awaiting a hearse for more than 13 minutes.

In the end, Palestinian activist El-Yousseph did make an apt observation when he said that the morning after the election some Ohio State University students have “been asleep and [have] woken up to a nightmare.” The difference is that the nightmare he and everyone else woke up to the morning Abdul Razak Ali Artan terrorized the OSU campus was not the same nightmare El-Yousseph and Yohn had envisioned the day after Donald Trump was elected.