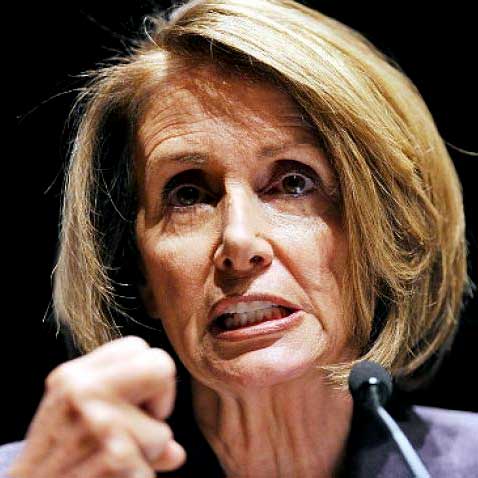 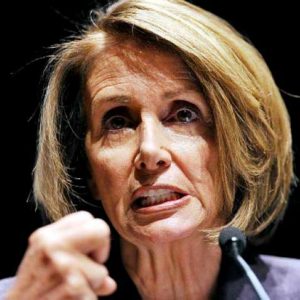 For pro-choice Catholic Nancy Pelosi (D-CA) the extent of her confusion used to only be saying really dumb stuff about Obamacare, abortion, and American history.

Take, for instance, the time Nancy told an adopted woman — to her face — at a CNN town hall meeting that her birth mother deserved the choice to abort her.

Then, while out shilling for Obamacare, Nancy once said that besides 3,000 abortions a day that she heartily condones, Republicans stopping Obamacare abortion funding would result in “women dying on the floor.”

On behalf of her beloved ACA, Nancy also celebrated the notion that the Founders had the “entrepreneurial” Affordable Care Act in mind for people who, in lieu of working full-time, would one day want to do other things like learn to play a musical instrument, or spend leisurely afternoons water coloring.

What’s scary is that this sub-standard level of American history expertise came from a woman who, despite confusing the Constitution with the Declaration of Independence, spent four years sitting just two heartbeats from the Oval Office.

Over the years, it’s been easy to blame Ms. Pelosi’s deer-in-the-headlight faux pas’ on things like way too many face lifts, having San Francisco roots or too much hair dye seeping into her smaller-than-normal brain.

In fairness though, Nancy’s ill-fitting dentures could be what makes her upper lip curl under when she speaks, which would distract the former Speaker mid-sentence. If her upper level is not the culprit, it could be those $10,000 Tahitian pearls she wears cutting the oxygen supply to her brain.

But now, at 77-years-old, and based on some of the outlandish things the almost-octogenarian has been saying lately, one can’t help but wonder whether the aging liberal is suffering mini-strokes, may be stricken with dementia, or perhaps clunked herself in the head with that huge gavel she swung around when she was Speaker of the House.

In February, during an appearance before Families USA, an activist group fighting the repeal of Obamacare, a mumbling Pelosi kept repeating herself, she instructed the audience to clap at her “applause line”, and called Republican John Kasich, the former governor of Ohio, the governor of Illinois.

Okay, so, just like U.S. history, maybe stand up comedy and geography aren’t Nancy’s forte either.

After those embarrassing moments, Pelosi went on to confuse Medicare with Medicaid, Martin Luther King Jr. with his long lost Asian relative “Martin Luther Sing”, and congratulated Families USA for her work.

Also in February, at a press conference, the House Minority diva mistakenly referred to President Trump as President Bush. Nancy, the spokesperson for the Democrat Party said: “While it’s only been a couple of weeks since the inauguration, we’ve seen nothing that I can work with President Bush on.”

Nonetheless, in April, on ABC’s This Week, while discussing Democrats working with the White House Nancy did it yet again. Not known for having a wry sense of humor or comedic timing, to correct her Bush/Trump mix up, Nancy quickly said: “I’m so sorry, President Bush. I never thought I would pray for the day that you were president again.”

Blame it on poor eyesight; just a few weeks after the second G.W. Bush gaffe, at a California Democrat Convention, Nancy got so caught up in the excitement of the moment, she plopped her derriere into a seat marked “Reserved” for a wheelchair.

Clearly, based on this conduct the aging politician has no handle on American history, founding principles, or the resolve and work ethic of our Founding Fathers. Moreover, Nana Pelosi also has limited knowledge of where our nation’s governors hail from, can’t tell the difference between our 43rd and 45th presidents, and judging from her choice of seating, may even have an issue with ableism.

Yet despite all those examples, the Pelosi-is-very-puzzled pièce de résistance took place during remarks she made at the Peter G. Peterson Foundation’s 2017 Fiscal Summit.

It was at the summit that the shining star of San Francisco politics confused the gun rights activist group, the National Rifle Association (NRA), with the Department of Defense’s National Security Agency (NSA). While being interviewed, Pelosi was straining to suggest that that the president she confused with Bush – twice – conspired with the Russians and then obstructed justice.

To have a president say, if he did, to the director of the FBI, or the DNI, the Director of National Intelligence, or the NRA person that—um, uh, that they should not go forward, it raises questions that need to be answered in a facts and law way, and not hearsay.

One would think that Nancy, who just last year suggested that a gun control vote could “save 90 lives”, would remember her suggestion to Congress to “protect and defend” the U.S. Constitution by enacting harsher gun control measures.

Instead, what is ironic, is that Nancy confused the group that advocates for the Constitutional right to “keep and bear Arms” with a government agency that Democrats like Pelosi typically think is all that is necessary to keep Americans safe.

The NRA would disagree, but, either way, what is clear is that something’s up with Nancy Pelosi.

And so, notwithstanding Nancy misplacing the simplest thoughts, when the current Minority Leader mistakenly connected those who safeguard national security with the protectors of the Second Amendment – she didn’t mean to — but she actually got something right.