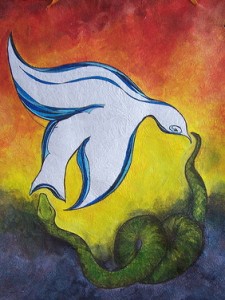 I have been trying for years to come to a place of being able to understand what to me is an obvious dichotomy between cultural sensitivity, which is defined as “knowing that differences exist between cultures, but not assigning values to the differences (better or worse, right or wrong)” and the definition of culture which is, “a way of life of a group of people–the behaviors, beliefs, values, and symbols that they accept, generally without thinking about them, and that are passed along by communication and imitation from one generation to the next.” Based on these definitions, if we do not accept every culture without judgment, do we become guilty of being culturally insensitive?

If we couple together moral relativism, which the definition implies, and cultural sensitivity we find ourselves trapped in an inescapable paradox. There are groups of people whose cultures are such that the destruction of others makes up the cumulative foundation of all they believe in. As a nation we have suffered great loss as a result of the ethnic expression of jihad war tactics. It is confusing though, aren’t those we presently consider our dire enemies considered such purely on the collective programming of their murderous, fanatical minds?

As a nation if we are to be culturally sensitive, by staying true to the definition, we cannot and should not assign values to any other people group’s cultivated behavior, knowledge, values or motives. If we make an excuse for any one group and then choose to condemn or judge any culture negatively we have entered and under-girded the anathema sphere of insensitivity.

We presently live in a nation where we are sensitive to everything except what is morally right; in turn we are bringing upon ourselves our own destruction from within. We bestow the rights and honor of American citizens on barbarians who hate everything that we are. We’re like people who don’t lock the doors to their homes because they themselves would never steal. We’ve lost the understanding of the Scripture that says, “Behold, I send you out as sheep in the midst of wolves; so be shrewd as serpents and innocent as doves. (Matthew 10:16) New American Standard Bible (©1995). The result is that the standard of right and wrong has become muddied and grey. There is no definition or direction and we find ourselves lost in a foggy forest at night unable to discern where to turn, what to do or how to escape the dilemma we find ourselves in.

We need to acknowledge the fact that we are doomed, if in order to remain sensitive, we have to forfeit our standard of right or wrong based on a definition, which beckons us to “…not assign values to our differences.” Moreover, if we question the incarceration and treatment of uncivilized, murderers and demonize governments, which strive to protect themselves from destruction, it is we who’ve been deceived. Cultural relativism to be true to what it is must remain amoral, regardless of the consequences of exposure to our civilization or national well being. We can’t have it both ways… either we are, or we aren’t.

Terrorism is warfare tactic in a religious jihad, which is and will be extended worldwide. It is very much a way of life to certain people groups. Their behaviors, beliefs, values and symbols are directly related to the destruction of any living thing or practice that contradicts their interpretation of their holy book. Not only are they deeply rooted and steeped in the culture of terrorism but they fervently communicate and pass on these beliefs and tactics to the next generation of martyrs they are zealously cultivating. This is their culture, are we now to judge it and be credited as insensitive? I think not. Haven’t we already given credibility to their cause by bestowing on enemy combatants American civil rights? Haven’t we extended a gesture of kindness by acknowledging the human rights of inhuman individuals who would behead  kindergartners in a heartbeat?

Why do we stop there? Why not supply Camp 3 Guantanamo Bay prisoners with new machetes as a good faith example of our cultural sensitivity and understanding of a cause that is exemplative of their culture? How about fuses, fertilizer and dump trucks? Shouldn’t we make sure that our detainees have a venue to express themselves, either while still in Cuba, or better yet when they are moved to Pennsylvania to a minimum security facility in John Murtha’s district? Why do we shake our heads in disbelief when we hear that, a teenage suicide bomber killed at least 35 people, including five members of parliament in Afghanistan…wasn’t he just culturally expressing himself?

Our beliefs are contradictory. We are caught in a quandary. We can’t apply moral relativism to one issue or one action and then not to others. If we do, we’ve become what we despise. Either we decide what is right and what is wrong on all levels and establish a standard, or we step aside and champion the diversity of different cultures, we erase the moral code and finally establish relativism as our god, even if it means the destruction of our nation, our lifestyle and all that we hold dear. In a land where choice reigns supreme, the choice is now ours.