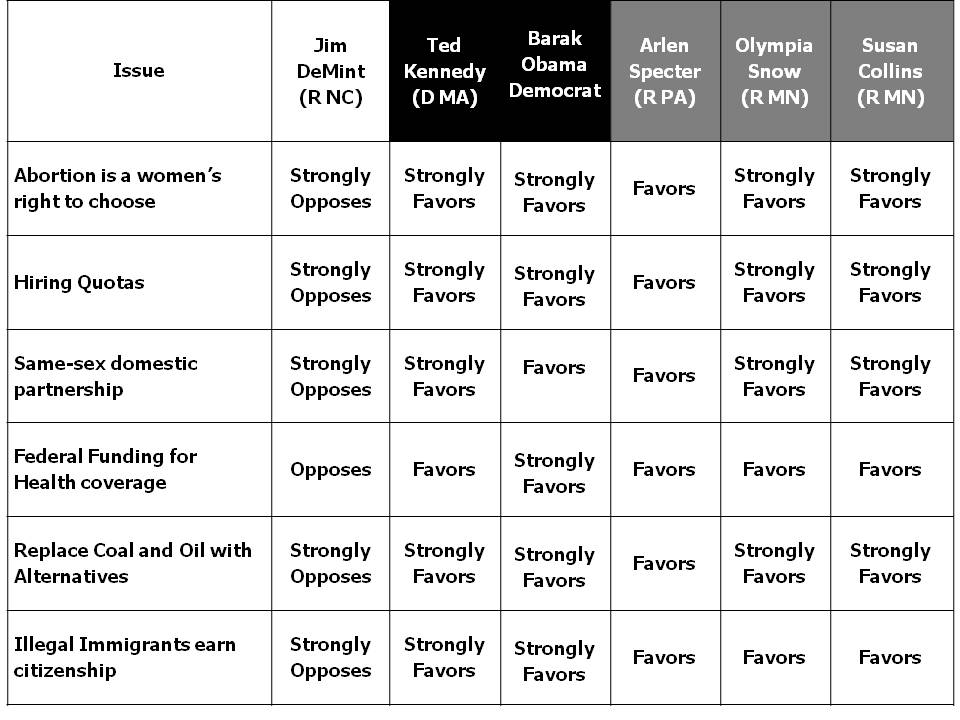 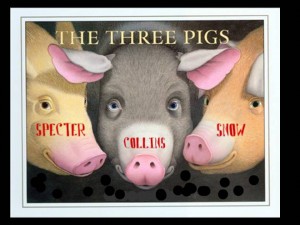 What could be worse that having a representative, which does just the opposite?  Isn’t a representative someone who stands in or acts in the place of another?  I wonder when the Republican moderates of Maine and Pennsylvania chose Susan Collins, Arlen Specter and Olympia Snowe as their “representatives” to the Senate they expected them to sell them, their children and their children’s children down the river in order to appear to be bi-partisan.  Well I don’t believe they are bipartisan at all…I believe that all three of them are die-hard partisans of the highest order.

They may have represented themselves in a disingenuous way, because these three embody the ideals and beliefs of a liberal party even though they all have a capital “R” after their names.  Someone needs to speak to Nancy Pelosi and Harry Reid and tell them that even with these three votes, the bill still cannot be called bi-partisan, because these Senators Republican’s in name only are liberal partisans in actuality.

The definition of partisan is a someone who is a firm adherent to a party, faction, cause, or person; especially one exhibiting blind, prejudiced, and unreasoning allegiance…all of which Specter, Collins and Snowe exhibit by their blind, unwavering allegiance to the Democratic cause of ushering into this nation unbridled socialism.

If you look over the chart below on basic conservative issues, these three “Republicans” Specter, Collins and Snowe agree more with Ted Kennedy and Barak Obama than they do Jim DeMint, a Conservative Republican from South Carolina on the key issues. 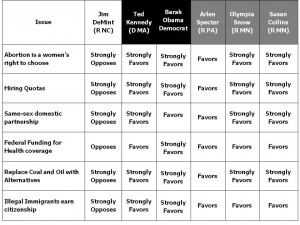 All three may be more conservative on the subject of taxes but does that matter when they heartily support federal funding for health care?   They can oppose high taxes all they want but their support of a federal funding for health coverage insures an additional tax payer burden of upwards to $100 billion per year because “… research sponsored by the Commonwealth Fund shows that achieving universal coverage with a plan similar to Mr. Obama’s campaign proposals would add “only” about $104 billion to federal spending in 2010 — not a small sum” (NYT Health Care Now Paul Krugman, January 29, 2009).

It is perceived by many that these three politicians gave the “Judas Kiss” to their constituencies and many of their supporters are suffering from a pervading case of disappointment and an overall sense of duplicity.  Some on our side even are deluded into thinking that Specter, Collins and Snowe somehow wrestled with their decision before they decided to sell their country down the river.  I don’t think they gave it a second thought. Seeing as history is a good indicator of future behavior looking back on the voting history of these three Senators should have alerted us not to depend on them to come through as champions of conservative principles.

Many in our party are shocked because they believe that there was a perfect opportunity for three Senators, on our side, to stand for the foundations of our Constitution, free markets, individual capitalism, and foundational freedoms.  They thought that they would exhibit the bravery and courage of character to make a difference for the benefit of our nation and true to form they failed.  What many on our side of the aisle failed to recognize that these three Senators stood proudly with “their party”.  They banded together with their leader Barak Obama and hero Ted Kennedy as a solid, cohesive unit.  With the votes of three Senators the socialist steamroller reached a quorum of 60.  It was too bad that gallant Ted Kennedy didn’t just stay home in Massachusetts and rest up for his intended incursion into imposing universal health care on us in the last few months of life.  His swan song will be that he can leave this planet with a legacy that will serve him well by burying the US health system at the bottom of the Chappaquiddick like he did Mary Jo Kopechne.

Without their votes, this economic stimulus package would not have passed in the Senate, “Senators Arlen Specter of Pennsylvania and Susan Collins of Maine appeared to be the critical Republicans to sign onto the bill, giving Democrats the 60 votes needed to advance to the final vote.  Democrats also voiced confidence that  Republican Senator Olympia Snowe of Main also would vote for the plan” (Senators Reach Tentative Deal on More Than $800B Economic ‘Spendulus’ Bill, Fox News, 2/05/09).  It is very telling that Arlen Specter called a bill that risks costing American taxpayers $9.7 trillion in bailouts a “moderate compromise”.  Maybe to Senator Specter it’s a moderate compromise, but to rational, reasoning Americans this bill is nothing more than a social engineering manifesto with an initial price tag of 1 trillion dollars, “…stuffed with pork projects and spending programs that don’t even pretend to be about economic growth” (National Review on Line, A Capitulation, Not a Compromise, 2-10-09).

Many conservatives believe that if these Senators would not have broken away and stuck together with their Congressional counterparts, Barak Obama would have had to include the Republican proposals and the bill may have had a very different bent.  What conservatives don’t understand is that Specter, Collins and Snowe would not have been true to their fundamental convictions if they had stood with the Conservatives in the Congress and the Senate.  These three Senators obviously believe we can spend our way out of a recession and don’t seem to have a problem hurting the US Economy.  Maybe they should have spent some time with their buddies in the Democratic controlled Congressional Budget Office who predict the stimulus will in due course hurt the US economy by squeezing out private investment and impeding economic growth.

So it would serve the Conservative Party well to be realists and recognize that we weren’t sold-out for thirty gold coins by Specter, Collins and Snowe because in the long run it will serve our purpose well to separate the wheat from the chaff and differentiate the dark from the light.  Maybe we’ll finally have the wherewithal to distinguish and acknowledge the enemy in our midst and finally rout them out once and for all.  We shouldn’t be surprised that we smell bacon cooking when pigs find themselves in the fire, should we?

When their re-election comes up, because of what we’ve accepted, we now are motivated to grant Specter, Snowe and Collins a new lease on life, a chance to reinvent their futures, to regroup and run as Democrats after we handily boot their pork butts out of our party.  Instead of being disappointed, upset, betrayed and  downtrodden it’s high time to get excited because just as Judas hung himself, so have these three and just as Jesus rose from the dead after His betrayal…the Conservatives in this country are in the process of being resurrected to new life.

© The information in this article cannot be copied or reproduced without permission.