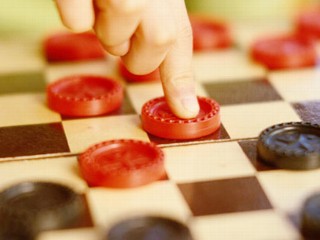 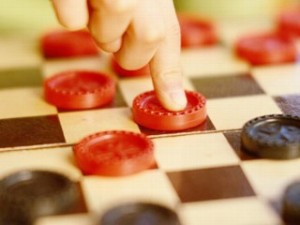 Did you ever play a game of checkers? We all know it’s a game where you try to advance across a black and red board and in the process you try to either capture or block your opponent until they are prevented from further moves. Whoever is cornered loses. I don’t know about you but lately the political landscape has made me as an American citizen feel that the game has been usurped by a king who has everyone that was playing fair captured and blocked by stretching and changing the rules. In this game of checkers the ones who should be winning are losing and the losers seem to be winning.

Customarily, way back when in the olden days, people purchased a home only when they could afford one. They scrimped and saved for a down payment and proudly acquired property well within their budgetary means taking into consideration their ability to pay for the term loan that usually had a 30-year limit. In 2009 such a practice is considered by many to be revolutionary in its concept, antiquity on parade and obsolete because everything seems to be turned upside down. Somewhere along the line, having the means to procure personal property by some and not by others was considered “unfair.” In response to a falsely perceived inequity, elected social engineers in the Democratic Party decided that having the money to buy a house was “discriminatory” criterion. To right this undeserved wrong, millions of mortgages were granted, without restraint, to people who lenders were well aware could never pay them back. The chips on the checker board were beginning to be moved in the wrong direction.

This practice goes against everything we’ve been raised to believe is correct or even feasible in the America we grew up in. For baby boomers it would be like giving the trophy to the water boy on the sidelines of a one mile race and then disqualifying the fastest sprinter. For those who play fair it’s like raptly watching the annual Miss America pageant and when it’s time to crown the most talented and beautiful contestant, a bag lady is brought in off the street and awarded the tiara, prize money and the national honor. For those who don’t stash our checkers under the table, it’s as unthinkable as applying for a job that requires the PhD. we’ve worked hard to earn and then losing the position to an adolescent that slices bologna at the local deli.

What is going on in America today can be likened to Olympic fantasists who can’t swim flying to Beijing, jumping into the pool with Michael Phelps and then after being fished out by the lifeguards being awarded the gold medal while Mr. Phelps is sent packing empty-handed from the podium. Presently, we are having our “gold” confiscated from us by a throng of rabble rousers and their willing gang leaders.

It’s time to accept the fact that the new America we live in pilfers instead of promotes the “American Dream”. Our elected officials are the Washington wet blankets that look for fervent fires of ambition and ingenuity and throw their full weight on them to snuff them out. Our accomplishments are being stolen from us by government officials that believe punishment needs to be meted out to level the field and to preserve equity regardless of the fact that those being hauled off to the penitentiary are innocent of the crime. Someone has been handing out extra checkers and allowing illegal kings to be crowned making it impossible to compete fairly in a game we’re being forced to play.

The order from the top is that to put right an out-of-control economic mess, taxpayers are being constrained to contribute extra money to the pot in order to bail out freeloaders. All hard-working Americans are being required under the barrel of a government gun to empty their pockets into the collective coffers to right an economic wrong they had no part in creating.

The state of our nation is such that individualism, pluck and self reliance are no longer enviable traits to aspire to, but instead forced mutual collectivism, dependency and equitable redistribution is the goal of the day. Hey, Mr. Community Organizer, since when did compulsory governmental pick pocketing cultivate an affable community spirit of openhandedness and good-will?

What kind of message are we sending when you get yourself in trouble by being totally irresponsible and in response to your dilemma the kumbaya kin ship floats up to the pier and is mandated to bail you out? While at the same time, in order not to overload the vessel, the people who built it and navigated it are forced to walk the plank? In Obamerica those wise enough to remain on dry land are being herded aboard another sinking ship to assure that those who chose to go on a fated cruise do not die alone endorsing impartiality over sanity. Someone is definitely stealing the checkers.

It used to be that the left thought that “It took a village to raise a child” now community tasks have expanded to paying off other people’s mortgages, providing for stranger’s and illegal aliens health care and compensating for the negligent behavior of able-bodied adults. This type of legislated charity is nothing more than compulsory largesse, which is presently being advocated on the national stage as a societal value we should all strive for.

One word, nestled amid the eloquence of Barack Obama’s victory speech, lingered long after the cheers subsided. Sacrifice. It’s a word too long absent from the political discourse, one that speaks to the change that Obama claims his presidency will represent. We cannot fix our finances without it. We can’t address our foreign oil dependence without it. We can’t repair our broken health care system without it… Sacrifice, after all, is the prefix for change. (Houston Chronicle Obama raises a long-neglected concept: sacrifice STEFFY, Nov. 7, 2008)

So now buying a house you can’t afford becomes someone else’s duty to bear? This “prefix for change” mandates that I and the family I work to provide for have to now do with less in order to pay dues to cover a stranger’s sorry buttocks? Is this what equal allocation of funds, socialistic sacrifice and Papa-patriotism is all about in the Barry Brotherhood of Man? White House Press Secretary Robert Gibbs even acknowledged that “there will be people that made bad decisions that in some ways will get help ” (AP, White House objects to ‘rant’ on its housing plan, Ben Feller, Feb 20-2009). Conscientious, hard working American’s, not responsible for messing up the housing market, are the ones being harshly fined and left with the vestiges of a tacky burst housing bubble stuck all over their faces.

The way the new system works is if you run out of gas while illegally drag racing, the government refueling truck is on the scene filled with tax payer blood money. You fail to pay the oil bill and your house is frosty, no problem the government oil truck, filled to the brim with tax payer currency is backing up and topping off your tank. You decide you want to go to Vegas for the weekend and gamble away your grocery budget and now you’re famished, not to worry the Uncle Sam Pea Pod delivery service is bringing a full month’s groceries and they are provided for you straight from the public pantry. If your utilities are shut off because you spent too much on a whim last month buying a stunning pair of Jimmy Choos? Not to worry, tax payer dollars are now the light switch that insures a parity beam will illuminate your dark dogged despair.

British philosopher Jeremy Bentham described the utilitarian goal as “…the greatest good for the greatest number.” With all due respect Mr. Bentham, “Is this regardless of at whose expense this is accomplished?”All this love and support is a way of proving America cares and we’re doing it with a warm, squishy monetary bear hug from us to them. So here we are in Obama’s new-fangled, malformed America where slothfulness is rewarded with a pay stub and contributing, hardworking citizens are legally burglarized by government gangsters. There is a chalkboard set up in the Oval Office where with dusty chalk and eraser the Controller-in-Chief divvies up the proletariat’s proceeds like a coach mapping out a football team’s game strategy.

The citizens of our nation are being treated like checkerboard chips being moved around in a game where someone else decides how everything in our lives is going to go wielding ultimate control over all of our destinies. In some instances it may seem like we have a few minor victories, but mostly we lose. The rules of the game are no longer being adhered to and we’re at the mercy of a king that has been granted unrestrained authority to move us any place on the board he decides we belong. So as this opposing team’s king captures us and boxes us in without freedom or options it is now our decision as to whether we want to be utterly defeated or get out of the game.