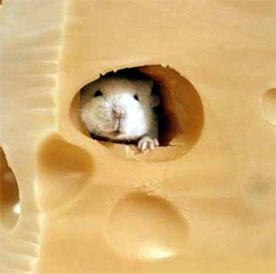 John Dryden the England’s Restoration Period’s great literary poet and playwright once said, “It is better to shun the bait, than struggle in the snare” (1631-1700). I don’t think a quote could be more true for a period in our own history than that one is right now. We should heed Dryden’s cautious advice, to avoid the bait lest we find ourselves struggling against a tight and suffocating snare.

The American people are like a mischief of mice and the federal government, under Barrister Barack Obama, has found a way to lure the horde of us with a string laden with a chunk of stinky cheese and for some reason we’re taking the bait.  Like a hungry cluster of rodents we follow.  What most mice don’t realize is that the cheese is the decoy and following the gratification of gaining the prize, comes the quick snap of the trap and after we realize we are unable to escape its too late!

The Barack Bailout has done a fabulous job of baiting the people of this nation with a meager $13.00 a week.    If I must …that is a whopping $1.85 a day.  Barry, with a straight face, on the news proudly announced that on April Fool’s Day Americans will receive the windfall, middle-class tax cut; he promised them all throughout his campaign.  Listening and watching him I couldn’t believe my eyes or ears. I thought to myself, “Is this guy serious? Are there that many simple people out there?”

The cheddar attached to the end of the string, which our benevolent leader has placed before us as a enticement involves more than a tidbit of change in our weekly check, which by the way couldn’t even buy a pound of Jarlsberg.  It involves the anticipation of sweet revenge being meted out to all those evil businesses, home mortgage company sharks, shyster car salesmen, banks and rich devils who will at long last get their due.

The Obama administration is proficient when it comes to justifying the doling out of our hard earned money to the indigent as a way of philanthropically “redistributing the wealth”.  He is a master at nurturing equity as a means of gaining political power, fostering class warfare and painting the successful as the enemy.

Barack Obama is great at making those who he defines as the victims believe they are going to receive a full reprieve from all accountability and control, which upon biting that bait, those same beneficiaries find such a belief to be patently false.  Kind of like when we found out the tax cut for the middle class came to fourteen cents less than two dollars a day.

So as you open your mouth to take your first taste of that Big Mac, which you purchased with an advance on the $1.85 per day that hasn’t hit your paycheck yet.  Take a good hard look at that cheese and before you settle into thinking that anything that the government provides for you comes without a price, think again!  It would be best to remove the cheese from your burger to prevent yourself from stimulating an appetite for something you might not be able to resist.

Collect yourself and step away from the public trough.  Let’s learn from that horde of mice that got a whiff of some cheese and when intoxicated disregarded the snare as they rushed for the bait and too late found it impossible to either struggle free or survive.