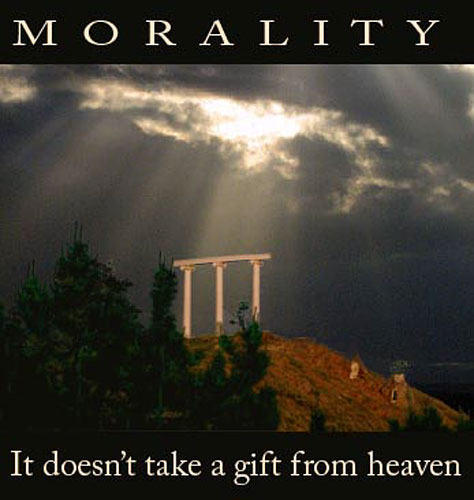 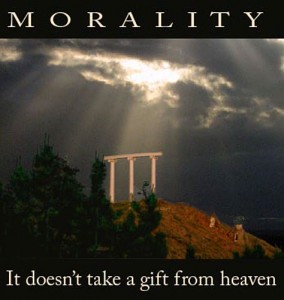 Morality is a system of standards based on right or wrong behavior, personal responsibility and conscience. The activist slogan,  “Keep your laws off my body” specifically addresses the issue of legislated morality. The premise is government should not have anything to say about what we do with in our personal lives, i.e. abortion rights and laws addressing sodomy .

Proponents of separation of church and state believe religious morality should not influence national legislation. The perception is that religion, particularly evangelical Christianity, is the oppressive limiter of personal rights, originator of discrimination and has no business promoting conservative values and beliefs in the public sector or, more specifically, legislating morality through the governmental process.

The rejection of Judeo-Christian biblical principals has given way to nouveau religious conviction that uses government as a vehicle to set moral policy through legislation. Though not viewed as such, secular progressive ideology has become its own formalized, established creed and appears to have a strong policy influence in the Obama Administration. Secularism exhibits meticulous faction agreement when it comes to causes, values and beliefs. It blends lifestyle choices with a liberal world view and is practiced with a zeal and faith that can only be defined as religion. The very action secularists have been censoring, which is “…making laws respecting an establishment of religion and therein the process prohibiting the free exercise there of,” is what they are presently involved in themselves.

With breakneck speed, leftist morality is being legislated through laws that disregard the national consensus, undermine family, promote government and the Nanny state, usurp parental influence and discourage religious affiliation. In 100 days, the legislation of morality has taken on new meaning under the guidance and tutelage of Barack Obama, a Democratic Congress and democratically weighted Senate, religiously supported by a left-leaning media. These four entities appear to be working, in tandem, to devastate the foundation of American culture by establishing and supporting laws that circumvent the standards of traditional “moral” behavior.

Former President George W. Bush was depicted by the left as a religious fanatic and derided for letting personal faith influence the “wall between church and state.” Yet, it is never questioned as to whether Obama’s mad dash to sign Executive Orders reversing overseas abortion funding and Provider Refusal Rules might be conviction driven by his own set of moral standards.

The President’s decision to control the conscience decisions of health care workers exemplifies legislation of secular morality. Religious health care workers, who view the destruction of unborn life as morally repugnant, are now forced, by law, to assist in what they consider to be murder or lose their job! What Americans don’t realize is that morality is legislated every time tax law forces conservative, religious people, who oppose abortion to contribute toward pro-choice organizations and tax-funded procedures. Obama’s directives give “choice” a whole new meaning, denying conventional moralists their own right-to-choose.

Obama has the Congress, Senate and media but is also dependent upon liberal judges to assist in the revamping of the national moral tone. The judiciary has a key role in left-leaning immoral legislation. The anointed high priest of secularism, the Honorable New York District Judge Edward Korman, ordered the FDA to sell “morning-after” pills to 17-year olds without a prescription. Assisting in the legislation of morality for the left and eager to broaden his notoriety, Judge Korman sought to lift age restrictions on the sale of birth control pills to minors and succeeded.

High schools are still legally prevented from dispensing headache medicine to students.  Tylenol is off limits but, with the approval of the left, the Plan B morning after pill can be taken during gym class. Liberal’s divulge a perverted sense of moral disingenuousness when they caution parents about cough medicine abuse, while at the same time stress that saline, scalpel and suction is none of their concern.

Abortion rights are where Obama exhibits religious fervor. He has been canonized the “choice” lobby’s patron saint, touting a voting record more liberal than NARAL. When asked, “Do you support parent consent/notification for minors seeking abortion?” Obama’s answer remains an unflinching, amen-like, “No!” This position presents a dichotomy for Obama because it’s reported that he requires up-dates as to where his daughters are at all times.  Michelle said, ” We actually had this conversation – – just let us know where you are going.” Consequently, saying “No” might be a little more difficult for Obama if Malia was missing, having been secretly ferried to a local Planned Parenthood by a White House staffer.

The President unreservedly usurps parental authority from us but adheres to a strict set of standards when it comes to his own children. The first couple expressed public disapproval at what they felt was the exploitation of Sasha and Malia, excoriating Ty Beanie Babies for marketing dolls in their likeness, and rightly so.  Nevertheless, a double standard prevails if there continues to be a failure on their part to exhibit the same indignation toward the murderous abortion industry, which abusively exploits other people’s daughters?

Liberals are duplicitous when it comes to their own family values. Obama’s handling of his children’s lives is reminiscent of occasional parental notification opponent, Hillary Clinton. Hillary refused to even discuss Chelsea getting her ears pierced until after her 13th birthday. Barack Obama and Secretary of State, Hillary Clinton, oppose traditional, religious moral legislation when it comes to underage girls having free access to choice. But neither one would hesitate to regulate ear ornamentation, nor embed GPS systems on their own daughters.

Obama never hesitates to use the full force of government to legislate. He is presently in the process of morally impacting American children’s lives through a youth brigade program, cleverly linked to college funding called Generations Invigorating Volunteerism and Education or the GIVE Act. Disguised as being voluntary, GIVE is on the fast track to being mandated in the near future. The bill prohibits task force members from exercising their first amendment rights, including participation in religious activities at local churches, under threat of losing their financial aid.

The crusade will enlist massive brigades of young people, who will be banned from sweeping local churches on Saturday afternoons, if they want to attend college. Instead, moral value will be assigned to the community service of shuttling underage girls to legally funded abortion clinics and handing out safe-sex condoms outside neighborhood public schools.

The President firmly controls the public pulpit. He is a spiritual Crusader who preaches daily to the national congregation stressing that those who disagree with his “religious” tenets are morally wrong and in need of legislative direction. Barack Obama is the proprietor of edicts that stress a new-fangled form of moral legislation where he, “…will never allow you to go back to your lives as usual.” He is making it clear that his policy directives must be committed, submitted and converted to or will be strictly imposed by immorally driven and governmentally legislated consequences.