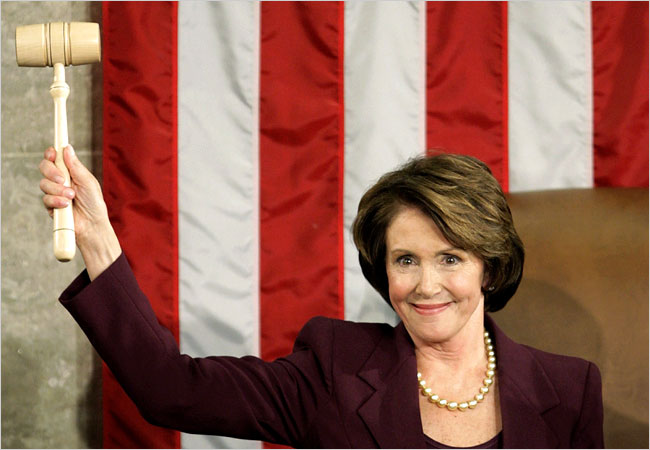 Nancy Pelosi is fighting for her political life. She is changing stories faster than she jumped out of her seat to clap for Obama at the State of the Union address. Since 2007, Pelosi has been snuggled up, comfy cozy in the fetal position in the womb of the Speaker of the House chair grasping the gavel  to her breast like a security blanket.  However, over the last few days Mrs. Pelosi has been also hanging onto a political umbilical cord for dear life.

Mother Pelosi has a reputation as an empathetic icon for the Left. She is the epitome of maternal kindness publicly condemning the use of ‘harsh interrogation techniques’ as morally reprehensible. She even called for the prosecution of U.S. government officials who authorized ‘torture techniques’ on our nation’s enemies.

Juxtaposed against her concern for terrorists, Pelosi is so Liberal that even NARAL gave her a 100% on abortion rights. For a Leftie that is the highest tribute in the party. It is the abortion rights Grammy award, which is a red carpet honor. If terrorists were fetus’, Nancy would approve of their torture. Yet, when it comes to real live terrorists, Nancy Pelosi is the quintessence of compassion.

Obama condemned the use of torture during the Bush Administration and moved to declassify the memos outlining enhanced interrogation techniques.  A question arose as to how much Congress, and specifically Ms. Pelosi, knew about the techniques that were authorized to gain information from the likes of  Abu Zubayah and Khalid Sheikh Mohammed. Nancy responded to the queries saying that the CIA never briefed her on enhanced interrogation techniques. Then an intelligence report surfaced stating that she was certainly briefed on the matter in 2002. The political umbilical cord was beginning to wrap around her neck. Nancy then changed her story purporting  the CIA had  informed her in 2003 but told her water boarding was “not being employed.” Nancy was obviously relieved being the staunch terrorist Protectoress she is.

Pro-choice advocates of Nancy’s caliber have such a high moral code that their word is truth. It’s a known fact they always put their own best interest last!  Readjusting from the breach position, Nancy now claims that Central Intelligence made a concerted effort, together with the Bush Administration, to lead Congress astray on the issue.  Nancy innocent, everyone else, guilty.

Nancy is so confident in Democratic power on the Hill and the Party’s love for her that she’s decided to take on Central Intelligence and accuse them of lying to Congress. Yet, the silence on the Left is deafening and leads one to surmise the Party might be preparing to expunge the occupant of the lofty Congressional throne in chambers by allowing the Speaker to lie herself out of the Speakership.

We may very well be witnessing the public political abortion of Nancy Pelosi.

Liberals oftentimes support policies, like abortion, but never fully think through the ramifications of their stances on their own lives. With corrupt people depravity knows no boundaries. They can want you one day and abort you the next. Liberals are notoriously selfish. If inconvenienced or threatened in their personal lives or in their political careers they do not vacillate, the problem is justifiably and promptly disposed of, which appears to be Ms. Pelosi’s impending fate.

Over the last few days, Nancy has become a tiny little  bit of an inconvenience, sort of like an unplanned pregnancy for a first-year college student, something that Liberals would encourage is better quietly “Taken care of!” The political party that has no problem purging millions of infants from the womb certainly would have nary a compunction suctioning the Speaker of the House from her chamber podium if need be. Pelosi continues to lie, while claiming she was lied to. The harbinger of “Bush lied” is now claiming the CIA lied to her about water boarding, but  offers Bush no mercy.

Nancy denying she was briefed or had any idea about water boarding as a means of enhanced interrogation can be likened to frolicking wildly at a party, blowing out the candles and gorging on chocolate cake and then with butter cream  all over your face pretending you haven’t a clue how it got there.

Much to her surprise Nancy is about to become the victim of her own degenerate belief system. Sort of like a cheating husband who divorces his wife and marries his girlfriend and then is shocked when his new wife cheats on him. Not because it’s payback but because anyone who would date a married man is not exactly the bastion of morality themselves. And so it is with Nancy. By Democrats refusing to defend the Speaker, Nancy is about to witness her beloved party assist in aborting her.  If they‘d do it to Junior…they will do it to Nancy!

She admitted in 2003 she knew about water boarding but didn’t fully understand the technique. The CIA didn’t explain water boarding to her liking so she’s not responsible? Nancy couldn’t quite grasp the concept of that what they said they were going to do, they actually did?  Former CIA Director, Porter Goss wrote in the Wall Street Journal, “I am slack jawed to read that members claim to have not understood that the techniques on which they were briefed were to actually be employed; or that specific techniques such as “water boarding” were never mentioned.”

Nancy’s inability to comprehend interrogation techniques explains a lot about her support, or lack thereof, for radical leftist policies such as abortion and enhanced interrogation. Pelosi probably disapproves of water boarding for terrorists but supports brutal partial birth abortion because she does not identify with the technique. Nancy doesn’t understand what torture is because she’s fine with saline burning the skin off infants but opposes walling mass murderers. No one explained to the Speaker the procedure of chopping up defenseless, unborn babies with a razor-like scalpel, which is why she is fine with D&C curettage but has a problem with sleep deprivation for terrorists? Nancy must need a little more clarification about caterpillars in small spaces with wild-eyed Jihadists, as compared with the piece-by-piece suctioning of a small, defenseless child from the womb.

Regardless, even if Nancy figures it all out, it may be too late to save her from the inevitable. Like most victims of abortion, the decision is out of her hands…it’s not her choice. Over the next few days we very well may see the Democratic Party drive itself over to the political Planned Parenthood and sign itself in. The Democrats will be in the waiting room while Nancy thrashes around in the political womb, twitching, shaking and fighting for her political life. But as any fetus destined for destruction knows, once Mom is at the clinic the deed is as good as done. Nancy, quivering and stammering while defending herself at the press conference accusing the CIA of lying and misleading her all but positioned the Democratic Party on the table for the procedure.

Life has a way of meting out justice on its own. If silence from the Democrats means anything it doesn’t seem hopeful for zygote Pelosi. As the Democratic party changes into its dressing gown and heads towards those double doors, Nancy is about to become a victim of the policies and statements she’s been proudly supporting as the San Francisco Liberal, gavel-waving, maven of Capitol Hill.

Nancy accused the innocent of lying…she was caught in a bigger lie. She persuaded others to flush their unborn …the Capitol Hill Party where she’s been securely huddled will sluice their womb of her inconvenient, disingenuous, troublesome self. Nancy is about to find out that Liberals justify eating their own, killing their young and purging their own flesh and blood and will do the same to her without ever giving Speaker of the House Nancy Pelosi even the tiniest second thought.