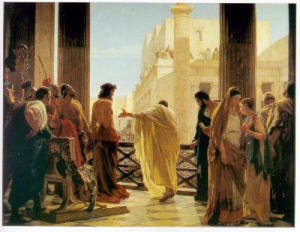 Immorality has a way of justifying itself through consensus. If the greater majority doesn’t have a problem with something, somehow those who do are censured. Morality is presently being defined as being open to reasonable discussion, regardless of its impact on decency or culture.

In antiquity a similar dynamic existed. Thousands of years ago moral verdicts were swayed by the cry of the multitude. Imagine, the people who Jesus ministered to in healing, even those who claimed He was their Messiah were amongst the rabble demanding Pilate release Zealot Barabbas in place of the Christ. Somehow it seems unconscionable a notorious prisoner, thief and fiend would be preferred over a righteous, honest man…but he was!

Which of the two do you want me to release to you?” asked the governor.   Barabbas, they answered. What shall I do, then, with Jesus who is called Christ?” Pilate asked.  They all answered, “Crucify him!” Matthew 27: 21-23.

In that situation, it appeared as if consensus decided who lived and who died ultimately justifying the outcome. As the ancient crowd dispersed, even those within the throng whose conscience sensed the injustice of the choice, quelled their nagging unrest by reassuring themselves with mob accord. So it is today rejecting the honorable choice and choosing instead the popular Barabbas.

Notre Dame University invited President Barack Obama to be the commencement speaker at their 2009 graduation ceremony. Social consensus sanctioned their selection. Based on canonical teachings of the Roman Catholic Church this institution purports to support the sanctity of life and tenets, which adhere to upholding the preservation of life from conception until natural death. Yet, when given a choice between Barabbas and Jesus, the crowd of Catholic graduates,their captivated clergy and enamored administration chose one who supports the antithesis of Christian teaching, placing him in a seat of honor on a dais high and lifted up before a devoted horde determined to defend their own Barabbas.

Human beings by nature are proficient at finding a way to assuage the guilt of poor moral decisions. This was evident in the University President, Rev. John Jenkins’s introductory statements, elevating civil discussion and common ground as values that somehow take precedence over the condemnation of butchery. The right Reverend Jenkins extolled courtesy, respect and love but failed to explain how these values cancel out murder. He forfeited an opportunity to mention the finality of death and how it differs from disrespect in its opportunity to reverse past offenses. By choosing to credit the approbation of iniquity over the greatest of good, “Give us Barabbas” became Notre Dame’s graduation day anthem.

Barack Obama is the most radically, liberal abortion rights advocate to ever grace the political stage. Regardless, he was asked to address the graduating class and was slated to receive an honorary Notre Dame Law degree. A university under the auspices of a Church opposed to a law, which has cost the lives of untold millions of unborn children, presented a politician who promotes those unjust laws an honorary law degree. By placing a blood soaked stole around his neck Notre Dame issued the corporate cry, “Give us Barabbas!”

Reverend Jenkins lauded pro-abortionist Obama’s gallantry in an effort to remediate his reputation in the eyes of protesters, confused and disappointed Catholics and critics. Jenkins attempted to balance the scale that holds the remains of a fetus on one side with the weight of admirable characteristics on the other. Failing to recognize Obama’s unending attempt to sway opinion to the left, Jenkins assigned moral merit and bravery to Obama’s acceptance to come to Notre Dame and give the commencement speech saying, “Others might have avoided this venue for that reason. But President Obama is not someone who stops talking to those who differ with him.” Extending Obama this type of kudos chastened all whose conviction remains unmoved. Those who continue to believe murder-is-murder and can never be compromised, discussed or viewed as an option for people of “good will.” Father Jenkins’s homage to Obama echoed, “Give us Barabbas!”

When Jesus entered the temple and found the money changers there, did he sit, discuss, negotiate and acknowledge all viewpoints? Did he concede intrinsic good will and openness to discussion? Did Jesus discipline those who were opposed to the moneychangers as being close minded, non-inclusive and disrespectful of differing opinions? “And Jesus entered into the temple of God, and cast out all them that sold and bought in the temple, and overthrew the tables of the money-changers, and the seats of them that sold the doves; and he said unto them, It is written, My house shall be called a house of prayer: but ye make it a den of robbers” (Matt 21:12-17).

Jesus recognized robbers for who they were and purged the premises promptly and harshly. If Jesus had stood on behalf of life in the midst of the festivities at Notre Dame, he would have been ushered out by security. Jesus protesting Obama’s three votes in 2001, 2002 and 2003 voting against giving medical treatment to infants that survive botched abortions would have warranted his arrest. If crucifixion was the payment for the crime, Barabbas would have gone free and Jesus would have gone straight to Golgotha. Based on the graduating classes’ shouts of support and their acceptance of renowned abortion advocate in the temple, it’s no wonder, “We’re ND” and “Yes we can!” sounded strangely like, “Give us Barabbas!”

Jenkins counterbalanced the support of massacre with the perceived power of national consensus, “Welcoming President Obama to Notre Dame, and we honor him for the qualities and accomplishments the American people admired in him when they elected him.” For moral relativists like Reverend Jenkins a litany of social achievements shields a pro-choice champion. Jenkins extolled Obama’s personal accomplishments and experiences attempting to neutralize the impact of murder in the ears of his hearers. For the reverend growing up without a father, being on food stamps and going to college voids the negativity of Obama’s support for inserting a knife in the base of a skull with the intention of ending the life of a partially born human being.

As the horde dispersed and Jesus was being scourged many of the ochlos who lobbied to free Barabbas were forced to substantiate his release. So too at Notre Dame denying the acquisition of wealth, community organizing, getting elected president and visiting a dying grandparent somehow evens the playing field when it comes to brutal butchery. Father Jenkins was able to disregard the wail of the innocents based on the historic election of the first African-American President. He mentioned concern for a country that has been deeply wounded by racial hatred but discounted the abortive genocide Obama supports against his own race. Standing high upon a mound of infant corpses, Father Jenkins could see the sun soaked stone portico in the distance, choosing between morality and Barabbas, his preference was most assuredly Barabbas.

Barack Obama had a lot to say in his own defense, and for him abortion rights are a deeply held belief that he holds with conviction, commitment and policy purpose, all of which he clings to with an obvious fervor. Proverbs 14:12 says, “There is a way which seems right to a man, But its end is the way of death.” He even brazenly shared that he too like the protesters plans to continue to “…make his case to the public with passion and conviction,” with the dichotomy of an “Open heart, open mind and fair-minded words.”

It never really mattered what Barabbas said on his own behalf, the crowd was all that mattered and their choice determined the fate of morality or immorality. Obama’s words matter little, the allure of smooth words and captivating charm cannot disguise the heap of rotting corpses behind the backdrop of patriotic flags and pithy slogans. This isn’t about Barack it’s about the multitude whose choices drive the moral direction of a nation. It’s about the consensus that we cling to in hopes of subduing aching consciences. It’s the “choice” of whom we choose to serve and when given that choice whether or not we pick Barabbas.

The roar of the Notre Dame crowd was not students hollering approval for a man that stands for everything they purport to despise. It was the moan of the unborn and their weeping echoing forth from the grave for justice. As Barack Obama looked out over an admiring sea of graduates, did he see the faces in the crowd of those who never made it out of the womb much less to college graduation.

The Gospel of Matthew has a poignant thought to contemplate as a crowd of Christians look the other way offering approbation and acclamation by choosing Barabbas and disparaging Christ. “Let his blood be upon us and upon our children” (Matt 27:25). And so it will be, the blood of purity shall be upon the heads of those who relinquish  an opportunity to publicly choose to stand against the murder of innocence preferring instead to offer up the unified chant, “Give us Barack-us.”