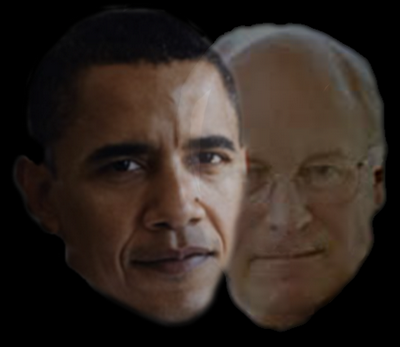 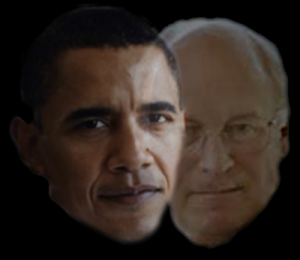 Neophyte politician Barack Obama met his match in Dick Cheney a mature, experienced statesman. Obama may think Rules for Radicals techniques will work on Dick, but he is dealing with a valiant, unmovable warrior. Obama is used to undying adulation and goes largely unchallenged in spite of providing minimal strategic policy details. Obama hasn’t a clue what he is doing and Dick Cheney is neither flummoxed nor threatened by bravado. Barry picked a fight with the wrong guy and if anyone should be anxious about the outcome it should be Obama.

Naive people enamored by rhetoric never bothered to research Obama’s past history or consider his lack of experience. The irresponsible choice of electing Obama was like asking a yellow cab driver to pilot a stealth bomber. If the pilot manages to get airborne there’s a good chance those who placed him in the cockpit will be victimized by his landing. Dick Cheney, an accomplished fighter pilot, recognizes the dire threat Obama poses to the nation and is attempting to divert disaster.

No one can deny Obama is a skilled orator, but when you get past his tri-weekly soliloquy photo-ops and the soaring violins cease the content leaves a lot to be desired. Obama is inexperienced, has a paper-thin resume and is driven exclusively by ideological leftist agenda. He is a man without conviction who tries to play both sides of the aisle, “…a double minded man, unstable in all his ways.” Obama’s rhetoric contains bitterness toward the history of the country he leads and promotes an agenda intended to right perceived wrongs, regardless of cost.

Obama loathes disparagement and becomes agitated if challenged. Dick Cheney is someone who is unwavering in his core beliefs and endures criticism with a strength, which comes from making the hard decisions. Obama continues to maintain the stance that since the election deemed him winner the option for political policy debate is closed. “Some Americans are angry, others want to refight debates that have been settled, most clearly at the ballot box in November.” Obama is used to having his every word breathlessly jotted into composition notebooks and regurgitated as gospel on mid-terms. However, Washington D.C. is not the University of Chicago School of Law and Dick Cheney isn’t one of his students and won’t readily submit to dictatorial edicts.

Although Obama has oratory proficiency that can be likened to ice skater Kristy Yamaguchi doing triple salchow jumps, Dick Cheney is a political Zamboni. He is highly articulate, intelligent and able to make all things clear and straightforward. He exudes undeniable gravitas and is adept at succinctly sweeping away the debris of deceit without histrionics and inappropriate emotionalism.

Since January 20th Cheney has been quietly standing in the wings watching the show, listening to the rhetoric as Obama undermines national security, defends terrorists, takes a wrecking ball to the reputation of the Bush Administration and exalts his own tenderfoot self as the authority who knows everything from the economy to subduing nuclear bullies. Dick Cheney has been observing a kindergarten dress-up where yesterday Obama was the sheriff and today the president.

When presented with the Guantanamo Bay challenge from a Democratically controlled U.S. Senate Obama was stunned. They, “…handed him a stinging setback by blocking funds to shutter the prison until he presents a detailed plan on what to do with the 240 terrorism suspects held there.” Psychologists say that narcissists externalize blame and true to form Obama did so in a speech at the National Archives addressing the nation’s security issues. Rather than admitting zero plans and that his second day in office hyped-up proclamation to release Gitmo detainees was a tad premature, he blamed the Bush Administration saying, “We are cleaning up something that is quite simply – a mess – a misguided experiment that has left in its wake a flood of legal challenges.”

To call what he has been left a “mess” reveals naivety, blatant unawareness and astounding arrogance. Does he appreciate the mess Bush/Cheney dealt with after 9-11? “The totality of the destruction of the 7 World Trade Center buildings is beyond imagination. Massive steel buildings with concrete floors, glass and offices simply pulverized, except for the steel. Bar joists and concrete reinforcement became a tangled mess that was difficulty to recognize. Deck form and concrete disappeared into dust. Office and victims became dust and ash.”

After a few months, quiet man Cheney obviously felt it was time to step forward and set the record straight ducking under the ropes and entering the ring.

Ideological Obama accused the Bush Administration of lying saying, “All too often, our government trimmed facts and evidence to fit ideological predispositions.” Obama’s comments engaged Cheney and the light-weight president was forced to box a seven-foot, fire-breathing hulk bearing down on him, while he boxed air. Obama, decked out in designer boxing duds was on notice to duke-it-out with a fearless, mean, sucker-punch guy, dressed in a ripped T-shirt with duct tape wrapped around his knuckles.

Cheney leaned against the ropes as towel-boy Emmanuel dried off Barry’s profusely sweaty forehead. Cool, calm Richard had Barry on the defensive. Cheney stared down Barack’s narcissistic soft spot and elicited a reaction. In self-protective mode, Barack portrayed himself to stand for the values of our Founding Fathers. He made a huge mistake when he said, “Every now and then, there are those who think that America’s safety and success requires us to walk away from the sacred principles enshrined in this building. And we hear such voices today.” That was when Cheney sprinkled resin on his clenched fists.

Cheney remained calm and at just the right moment came off the ropes sans teleprompter, script or backdrop of the Constitution as filler. His conviction is his core and his strength and in clear and concise terms retorted to the absurdity of Obama’s policy to release enhanced interrogation memos, coddle terrorists, and transfer them to American prisons or to call security measures torture. Cheney scored a right to the abdomen saying, “There is never a good time to compromise when the lives and safety of the American people are in the balance.”

Obama came back with a wordy, lengthy speech like a boxer dancing around the ring. Cheney, sure-footed and unafraid, entered the center and said, “Releasing the interrogation memos was flatly contrary to the national security interest of the United States.” Barry gasping for breath cited human rights, the closing of Guantanamo Bay vowing no retreat on the Cuban prison. Cheney responded with a jab to the bridge of his nose asserting this type of irresponsible policy as “rooted in politics not the safety of Americans.”

Barack Obama forced to wipe the trickle of blood from his nose while holding up falling boxer shorts with the other hand, coughed up blood as he tried to reassure a booing crowd that “super-max” jails might be an option for the most dangerous Al Qaeda detainees. Huh? Circling Obama, Cheney mocked him, “The administration has found that it’s easy to receive applause in Europe for closing Guantanamo…but it’s tricky to come up with an alternative that will serve the interest of justice and America’s national security.” Swish Barry’s ideological front tooth went flying.

Obama down for the count crawled around on his belly, attempting to address the use of enhanced interrogation. Obama appealed to the moral fiber of the American conscience saying, “We must leave these methods where they – belong – in the past. They are not who we are. They are not America.” Cheney came in with a left to the chin and replied to the most liberal, pro-choice President in American history calling him a person who engages in, “contrived indignation and phony moralizing on the interrogation methods applied to a few captured terrorists.” Cheney rightly reminded his audience that, “…people who consistently distort the truth in this way are in no position to lecture anyone about “values.”

Pushing the Bush/Cheney policy against the ropes and inflaming the left the Obama Administration in an attempt to “…stay true to who we are” released five memos revealing the enhanced interrogation techniques utilized to gain information from three high ranking terrorists calling them “torture.” Cheney, a moral man, whose main concern has always been the protection and safety of America, felt a knockout punch was overdue, especially since Barack accused our nation of, “…losing our moral bearings over torture.” Cheney split Obama’s lip by saying, “For all that we’ve lost in this conflict, the United States has never lost its moral bearings…I can assure you [the interrogated terrorists] were neither innocent nor victims.”

Obama shielded his face from an oncoming assault but was unable to protect himself from the onslaught…where truth defeats lies and morality overturns immorality…Cheney’s final blow came couched in a question that probes deeper than the threat of Islamic jihadists. It challenges those who desire our destruction and can be applied to anyone, including his opponent, who hates this nation, its values and judges our moral standards from a place of faulty morality of their own. The knockout came when Cheney said,  “It is much closer to the truth that terrorists hate this country precisely because of the values we profess and seek to live by, not by some alleged failure to do so. Nor are terrorists or those who see them as victims exactly the best judges of America’s moral standards, one way or the other.”

With the clang of the final bell the round and the match was over. Cheney retained the championship belt of protector of national security, tested leadership, courage and patriotism, as whimpering, whiny, wounded Obama skulked away.