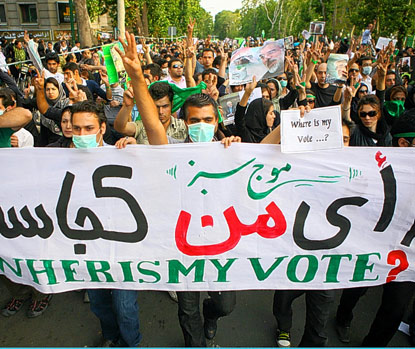 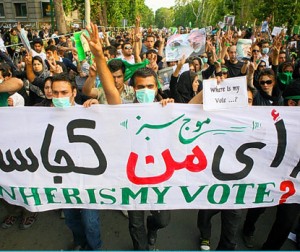 Down through history the only obstacle to independence and liberty being exercised by free people are totalitarian leaders and governments that restrict what God has divinely bestowed on mankind — freedom. Recently, that quest for freedom has emerged in two diametrically opposed protests, one in the United States, and another, thousands of miles away, in Iran. Yet, as both exhibit the intrinsic cry of the human spirit to be free, American president, Barack Obama has essentially brushed aside the significance of both.

Obama’s failure to acknowledge one and denounce the other implies a latent disdain toward free speech and peaceful assembly.  On Tax Day, Obama disregarded free citizens exercising First Amendment rights to peaceful protest and recently, in like manner, failed to forcefully condemn aggression against the Iranian people demanding justice for what appears to be a dishonest election.

Former Supreme Court Justice, William Orville Douglas once said that, “The First Amendment takes confidence in the common sense of our people and in the maturity of their judgment the great postulate of our democracy.” Based on Obama’s blasé stance toward the first of our Constitutional rights, could it be that he doesn’t believe the public has common sense or maturity of judgment?  Does he think the American electorate should be prevented from speaking out in protest against government autocracy? One has to wonder whether the power of the people’s voices irritate Obama because the president seems to bristle at the sight of large numbers of people demanding to be heard.

In April over a half a million American citizens exercised their First Amendment rights at nation-wide tea parties.  Citizens gathered to voice discontent with taxation, government regulation, over-spending, bailouts, government control of production and the redistribution of wealth.  Yet, as five hundred thousand Americans peacefully protested, the White House reported that Obama was, “…unaware of the Tea Parties.” Obama, threatened by populist disapproval of his tax and spend agenda, chose to ignore and disregard the dissent of those he views as his detractors.

When the president did choose to address the demonstrations he did so in a derogatory style.  He coupled derision for the protesters with criticism of a major news organization, which he never fails to mention in a deprecating manner. The president interpreted the free exercise of First Amendment rights by thousands of Americans as “…folks waving tea bags around.” The leader of the free world’s smarmy description appeared to be an attempt to demean the power of the right to assemble in peaceful protest, an odd reaction from the one who swore to uphold the Constitution, which guarantees Americans those rights.

Obama is not secretive about his disdain for opposing viewpoints.  During the run-up to the election Obama was, “…convinced that if there were no Fox News, he might be two or three points higher in the polls.”  More recently he blamed Fox News exclusively for the growing opposition to his health care policy saying, “First of all, I’ve got one television station that is entirely devoted to attacking my administration.”  Does Obama consider his policy initiatives so crucial that he might justify potentially quelling open debate by news organizations viewed as adversarial to his agenda?

Obama’s comments and attitudes toward protests, contradictory news organizations and pundits sound frighteningly like what is being heard in Iran. In an attempt to silence all media and quash the election protests the Iranian Revolutionary Guard have taken action against what they refer to as “deviant news sites“.  Much like Obama, the present powers of Iran believe that open and free press curtails theocratic control, undermining the mullahs plan to remain in power.

Defeated Mir Hossein Mousavi called for the protest rallies in response to what he called a “shameful fraud” in the supposed landslide re-election Mahmoud Ahmadinejad. Protesters responded by risking their lives to march in silent challenge to the authority of Iran’s despotic regime. Ordinary Iranian people hungry for freedom, demanding justice boldly flout both violence and intimidation in Tiananmen Square defiance.

The bravery of common Iranian citizens defying their government to peacefully assemble and publicly protest has been met with very little support from an American president who appears to brush aside the political courage of a new generation of Iranian freedom fighters. Iran’s youthful protesters are exercising what can only be described as a version of American First Amendment rights. Obama’s response begs the obvious question, does he view thousands of Iranian reformist candidate supporters, adorned in green and waving photos of defeated Mousavi, the same way as the folks he described on April 15th as “waving around tea bags?”

Obama’s only response has been to prematurely announce Admadinejad’s victory followed up by expressing what he says is “deep concern” about the results.  Curiously, he then articulated that it is not, “…productive…to be seen as meddling…in Iranian elections.” Barack Obama declined the opportunity to voice support for democratic reform from repressive despots.  He morally equated condemning vicious governmental crackdown on peaceful protesters as interfering.   Obama enthusiastically meddles when wresting the means of production from the American private sector but when enslaved people fight for democratic ideals Obama avoids voicing his opinion for fear of being viewed as intrusive.

A disturbing trend is emerging. Obama trivializes abuses against citizens of oppressive regimes fighting for democratic rights and is attentive toward the rights of Black Panthers intimidating voters outside polls during an American election. It stands to reason that Obama, who may have benefited personally from electoral dishonesty and inconsistency, would find it hard to condemn Iranian elections where, “People feel humiliated because they came and voted in large numbers,” yet, their vote went unrecognized

As our nation watches the violence against peaceful protest and free press in an oppressive nation it would be wise to pay close attention to subtle nuances and similarities with our own president’s actions. Some leaders believe that their political agenda justifies the means of attaining power.  Obama seems to display an acute awareness that his condemnation of Iran’s power grab could threaten his own authority.  His lack of action and reaction illustrates an obvious disdain for the political nemesis of peaceful protest.

Our leader swore to uphold the Constitutional rights of every American and to insure the safety of our freedoms. Yet, Obama ignores peaceful protest by large portions of the American electorate, views free press as a menace, and seems to demand total compliance from citizens and media alike.  And, as the world waits, he chooses to remain silent as Iranian reformers are beaten and die on the streets of Tehran fighting for the rights he swore to champion.

The example of fearless Iranians, marching through the streets of Iran, behooves Americans to continue to worship, speak, write, petition and gather, notwithstanding the potential of future costs to our own well being.  Americans have been passed, from those who fought and died for freedom, the torch of truth, common sense and maturity. Despite our leaders, we are ultimately responsible for the great postulate of democracy remaining intact.  We remain the beacon to a world that cries out for God given rights to liberties, which presently are jeopardized in a great nation where once they were secure.