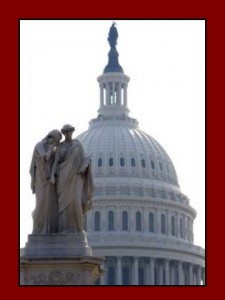 Throughout history, the position of cupbearer was earned as a result of a reputation for faithful service.  The title was highly valued and given to only a select few because along with the oath came the primary obligation of putting self last. Cupbearers were upright, conscientious, diffident and based on their readiness to sacrifice their life, considered valiant.  The job of defending rulers from harm made cup bearing a position of high esteem and worthy of confidence by those subject to their protective service.

The cupbearer’s responsibility was to guard against venom being mixed into the King’s goblet.  Self-sacrificial in nature and willing to suffer death a cupbearer insured that sovereigns remained unscathed by deadly conspiracy.  Firmly committed to the protection and well being of those served a cupbearer would voluntarily take the first sip of every drink before allowing a King or Emperor to partake of even a drop.

Atop the dome of the US Capitol in Washington DC Lady Liberty or Lady Freedom is perched as a symbol of the foundational tenets of American ideology.  Of late, Lady Freedom, though not a living, breathing being is in need of a cupbearer to protect her from a noxious governmental cup filled with proposals threatening her “…life, liberty and pursuit of happiness.”

Who better to be America’s cupbearers than those who occupy seats in the same US Capitol Lady Freedom adorns and inspires?  Who more able to assure her safety from harm than those trusted with the revered position of defending our liberties?  Those who swore to solemnly “…defend the Constitution of the United States against all enemies, foreign and domestic;” and who affirmed that oath, “…without any mental reservation or purpose of evasion.”

A dilemma arises for Lady Freedom when those taking the pledge to accept the mantle of cupbearer become menaces to the freedom they swore to preserve.  Democrats in Washington DC are insistent that Americans imbibe policy libations, which they as cupbearers refuse to sample beforehand.

Take for example the toxic health care cocktail being prepared in our nation’s capital.  Like a rank cup of wine Congress plans to serve up the deadly drink but refuses to swallow a drop. The reaction of Democratic cupbearers, those who are supposed to safeguard our national life, indicates danger contained within the governmental goblet being lifted to our mouth.

Recently, Senator Tom Coburn of Oklahoma, a Nehemiah in the midst of cowards, proposed a bill that would require every member of Congress sign onto the health care plan proposed to the American people, and in doing so “…demonstrate leadership — and confidence in the system.” In cupbearer terms, Coburn challenged the leaders in Congress to, “Take the first sip to show those they protect that there is nothing to fear… they are safe to accept what is offered.”

The Senator believes if the goblet’s contents are good enough for Lady Freedom those who pledged her protection should be willing to knock back a mouthful before affirmatively passing it along.  Coburn said, “…if Congress decides a government-run health plan is good enough for the American people, it should be willing to put itself under its care.” Democratic reaction to Coburn’s proposal included a decline to sample the offering,

Obviously, many members of Congress — who are used to a generous and flexible set of health benefits — have no intention of letting the Coburn mandate become law. They will … strip it from the bill … between the two houses if necessary.

Then, another loyal cupbearer Representative John Fleming, of Louisiana asked, “… if public health care is such a great idea, why don’t members of Congress who vote for it actually sign up their own families?”

Expressing the sense of the House of Representatives that members who vote in favor of the establishment of a public, federal government run health insurance option are urged to forgo their right to participate in the Federal Employees Health Benefits Program (FEHBP) and agree to enroll under that public option.

In a good faith effort, Congress should be willing to vouch for the quality of what they offer by taking the lead, reassuring the nation that our welfare comes before theirs.  Up till now, they seem disinclined to do either.

Congressional cupbearers avoid the taste test, while concocting a deathblow to Constitutional fidelity in the form of a lethal health care bill. They do this while excusing themselves from the public version of the reform they propose. Like cupbearers in service to our nation, those who represent us should be guided by the principle that American citizens are unilaterally exempt from any swill those in leadership don’t swig first. Instead Democrats, hiding behind a curtain of rhetoric, lips sodden with obfuscation and half-truths continue to press the nation to swallow their caustic “solution.”

Democratic representatives have zero compunction when it comes to leaving the Lady vulnerable to poisonous policy don’t they know that, “When the righteous thrive, the people rejoice; when the wicked rule, the people groan?” (Proverbs 29:2)  By proposing laws they are free from, President Obama, and the House and Senate leadership serve themselves the finest wine, while forcing Americans to choke down plonk. In response, the Great Lady slapping aside the bitter cup and its foul contents must promptly dismiss counterfeit cupbearers who refuse to taste legislative libation before passing it to her. Disregarding, without exception, the party of impostors disguised as guardians prowling and stalking the halls of power.