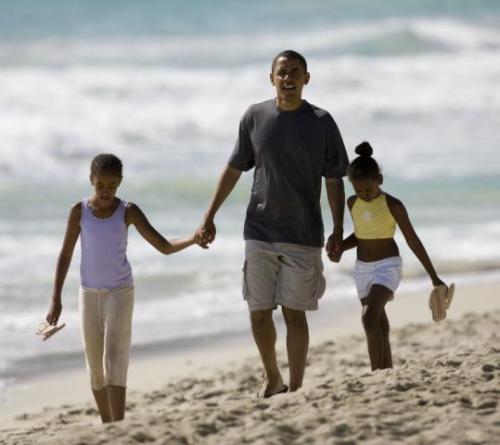 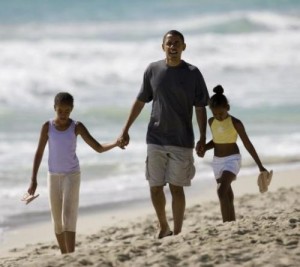 Sigmund Freud said, “I cannot think of any need in childhood as strong as the need for a father’s protection.”

Fatherly dedication to the safety and well being of children is a need that offspring have and a duty that all fathers possess regardless of rank or station.   In an interview in the June 21, 2009 edition of Parade Magazine the President shared insights on his relationship with his daughters in an article entitled, Obama: I have been an imperfect father’ the commander in chief reflects on what good parenting means to him.

In the commentary, the President expressed gratitude for the opportunity to be a protective presence in the lives of his girls.  He articulated that, “As fathers, we need to be involved in our children’s lives not just when it’s convenient or easy, and not just when they’re doing well – but when it’s difficult and thankless, and they’re struggling.  That is when they need us most.”

Obama exposed his own childhood pain by saying, “In many ways, I came to understand the importance of fatherhood through its absence – both in my life and in the lives of others.” He went onto share his gratefulness for the unhindered opportunity to pursue a level of paternity he lacked in his own life. Aware of the negative influence an absentee father has on a child’s development, one wonders why Obama cultivates paternal absence by supporting extreme anti-parental notification laws that affect parent-child relationships?

Obama fluently stated what he believed to be essential in successful parenting. Then contradicting his own decree he raises bureaucratic obstacles restricting fatherly rights to the protective standards he sets forth. On the surface the President convincingly articulates the need for men to be responsible for their children’s security.  Yet, beneath the poignancy of his words lies the inescapable paradox of Obama granting personal father-child bonding privileges to himself, while precluding other fathers that same right.

Liberalism advances a conflicted caste system; one set of standards is applicable to the political elite and another in the lives of those they govern. Obama expresses that it is incumbent upon fathers to “…set limits and expectations” for children. Then, he allocates government as a surrogate parent, which undercuts what ought to exist exclusively between father and child.

In his brief stint in the United States Senate, Obama voted against a law that would stop the underhanded practice of taking a minor girl from a state with a parental notification law to one that doesn’t to obtain a secret abortion.

The President expressed in the Parade interview that he “…came to understand that the hole a man leaves when he abandons his responsibility to his children is one that no government can fill.” Yet, Obama’s support of excessively liberal abortion policy fosters unintentional desertion by disallowing inherent parental rights to notification. Denying both fathers and mothers the right to support and protect their children, “…when they [are] needed the most,” bestows on government the authorization to fill a “hole” by proxy, which even Obama admits bureaucrats are incapable of satisfying.

Lamenting lost opportunities, the President plaintively shared with readers, “I was missing moments of my daughters’ lives that I’d never get back.  It is a loss I will never fully accept.” This is a stunning statement from someone who enthusiastically separates parents from children through legislation that willingly promotes devastating loss to and in innocent lives.

Obama gasses up the bus that shuttles minors across state lines to abortion mills, while his daughters remain safely sheltered in the shadow of his protective wings. Recently, Obama requested his children be granted time alone during a family vacation on Martha’s Vineyard.  Agreed, his little girls shouldn’t be dragged into the political arena and must be provided the normalcy every child deserves. In an effort to safeguard them, Obama, “…asked for privacy for… 8-year-old Sasha and 11-year-old Malia.

As a nurturing dad, Obama stood between his girls and the world, protecting them as well he should.  This is both his obligation and their birthright. Yet, while protecting his own daughters from being photographed while eating ice cream, Obama touts an abortion voting record imperiling minors and depriving parents the power to shield their children from things more detrimental than having a photograph taken at Dairy Queen.

Barack Obama’s exhortation that, “…we need fathers to step up, to realize that their job does not end at conception; that what makes you a man is not the ability to have a child but the courage to raise one,” is at best, both duplicitous and disingenuous.  He encourages fathers to exhibit valor in shielding their children from harm.  Then, by voting “No, on notifying parents of minors who get out-of-state abortions,” proceeds to legislatively undermine the ability to follow the protective suggestions he proposes.

If Obama wants to further the cause of fatherhood, rather than advocating for extreme pro-choice policies, he should support men having the right to protect their own daughters in a time of crisis. Moreover, from a paternal perspective, he might consider rethinking his support of legislation, which has neither the safety of children, nor their well-being in mind.

Barack Obama should restrain from pontificating on the obligations of fathers and instead, as a concerned parent himself, consider disassociating from the liberal agenda he presently promotes, which threatens everyone’s daughters, including his own.