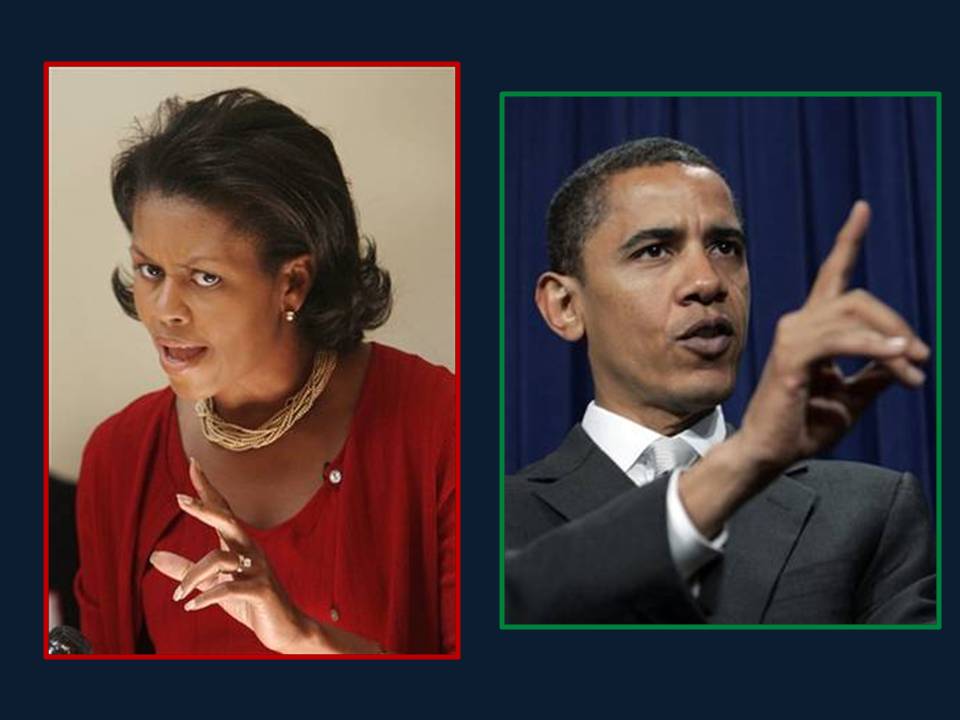 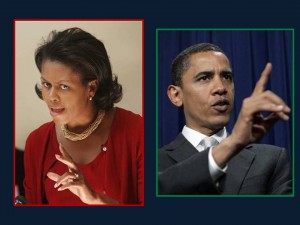 Mixed message mavens Michelle and Barack are proving they would be as unsuccessful at early childhood education as they are at politics. Although the state of American public education is abysmal, these two are compounding the issue by sending children messages that cannot reconcile from one paragraph to another within their own speeches, or more glaringly between the contradictory messages each one sends separately.  In an attempt to give confidence to the youth of America, this dynamic duo is doing nothing more than perplexing young impressionable minds.

According communication specialist, Dr. Rich Kirschner, “Mixed messages are confusing and when people are confused and things don’t get better, they become cynical polarized and angry, or they collapse into a state of silence and helplessness.”  So that explains it!

If children don’t know whether to line up, sit cross legged on the floor or have snack maybe the First Couple are partly responsible.  Michelle’s words to kids baffle when compared to the messages her husband has already conveyed.  Incongruousness reigns as Michelle blows the whistle signaling the start of playtime, while Barack announces its time to board the bus and head for home.

Case in point, Barack Obama decided it was his duty to encourage and urge American children to take education seriously on the first day of school.  Along with sharing horror stories from his youth that chronicled paternal abandonment, Obama goaded the children toward academic excellence with stories of brain tumors, poverty, AIDS, foster care, bullying and other uplifting exhortations toward success in school. In addition to his list of inspirational motivators, Obama decided to inject a giant sized dose of reality by telling children wearing Derek Jeter T-shirts and carrying Carrie Underwood lunch boxes that he,

Knows that sometimes, they get the sense from TV that they can be rich and successful without any hard work – that their ticket to success is through rapping or basketball or being a reality TV star, when chances are, they’re never going to be any of those things.

After the children, still reeling from the left jab of disappointment, refocused on his speech, Obama went on to mention JK Rowling and Michael Jordan, explaining that Jordan,”…failed over and over and over again in his life. And that is why he succeeded.”  Huh?  Obama illuminated impressionable minds to the fact that failure leads to successfully accomplishing something you’ll never accomplish.

Dr. Kirschner believes sexual predators and perpetrators of domestic violence use mixed messages neither of which are applicable to the President.  However, control freaks also use mixed messages, “either consciously or unconsciously…as a way of controlling others,” which seems to be Obama’s signature style. Kirschner says, “…there are several hypnotic techniques that use mixed message to break down a person’s ability to think and take them into a hypnotic state,” an approach that apparently provided Obama  glowing returns in  the last election.

To add insult to injury, Michelle Obama sacrificially traveled to Copenhagen on the behalf of Chicago and the children and it wasn’t just to ask them to share their Danske Smakager.  She went there to pitch for the Summer Olympics coming to Chicago in 2016 and even more specifically to “bridge the gap” for Chicago’s children, whatever that means? Sports don’t seem to be a problem in the Windy City; Chicago’s children seem to be getting ample batting practice based on the news over the last few days.

Michelle’s message to the International Olympic Committee (IOC) was quite different from Barack’s school day lesson in realism.  The First Lady contradicted her husband’s message by saying it was imperative that the Olympics come to Chicago because, unlike children in Arlington, Virginia who were told, “…chances are, you’re not going to be any of those things,” the Olympics hold an important message for children and to,

Let people know that we understand that sports saves lives, that it makes dreams come true, that it creates visions in kids’ heads to make them think they can be the next David Robinson, the next Barack Obama, the next Nadia Comanici, the next Oprah Winfrey.

This in itself was not only confusing but an extremely prejudiced statement on the part of Michelle.  She discriminatorily cited  two famous basket ball stars, three African-Americans, just one white gymnast and a person who could use a couple of jogs around the track.  Besides confusing children by using Oprah as an example as to why the Olympics should come to Chicago, didn’t Barack Obama, just a few weeks ago tell the kiddies that they’d likely never be Michael Jordan, let alone David Robinson?  Now, before assembly or a fire drill we’d  like Shelley to tell us, which is it?

Kirschner says, “…mixed messages give rise to an ever increasing number of negative and difficult behaviors as people try to navigate the confused situation.”  No wonder the kids in Chicago mistook sixteen year old, honor student Derrion Albert for a gang member before beating him to death – these two Chicago representatives don’t make any sense.  And to make matters worse, they are now sending out their befuddled method of communication to the whole country and the larger world, giving the term “he said, she said” a whole new meaning.

Theoretically mixed messages have been responsible for everything from schizophrenia to substance abuse in children when parents say one thing and do another thereby sending confusing messages to offspring.  According to Australian social worker Paul Gibney,

The essential hypothesis of the double bind theory is that the victim – the person who becomes psychotically unwell – finds him or herself in a communicational matrix, in which messages contradict each other, the contradiction is not able to be communicated on and the unwell person is not able to leave the field of interaction.

And who more than young children are incapable of finding their way out of a communication matrices or able to unravel contradicting messages from individuals in authority?  Or, worse yet, who more than children are “…unable to leave the field of interaction,” especially when teachers insist they submit to an hour long speech by the President of the United States or endure an afternoon of the First Lady speaking on their behalf in Copenhagen?  Both conveying self-gratifying messages any person who desires to be psychologically healthy should avoid.

Kirshner has  advice for children and grownups alike, cautioning…

Because mixed messages give rise to an ever increasing number of negative and difficult behaviors as people try to navigate the confused situation…you can notice the confused state they trigger as an early warning sign that someone may be messing with your head.

Thus, what greater gift could America give Chicago’s children then to send head messers, Michelle and Barack back to 5046 Greenwood Avenue four years prior to the Summer Olympics?  Michelle and Barack can continue doing the excellent job they were doing before leaving Chicago “making the concerns of kids …their own.” This could be a national effort to “open the doors of the White House” and send those two crazy, mixed up Chicago kids back to the community they love before their incongruousness and confusion makes Derrion Albert’s out of all of us.