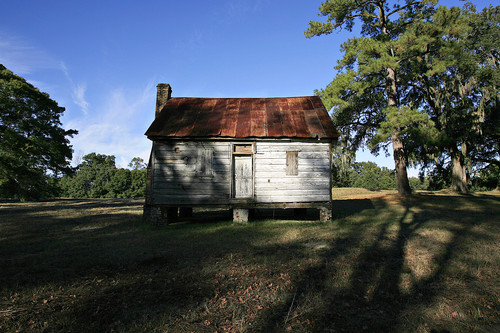 Barack Obama recently said, “I am married to a black American who carries within her the blood of slaves and slave owners.” It was while on the campaign trail that Michelle Obama reconnected with relatives and became aware that on her father Fraser Robinson’s side her great-great-great grandparents toiled as slaves in mosquito infested rice fields in the low country of South Carolina.  Up until the Civil War, the Robinson’s lived on a plantation named Friendfield, whose most distinguished historical feature was a dusty, dirt road known as Slave Street.

On her maternal side a similar heritage recently emerged indicating that around 1850 a “negro girl Melvinia,” was bequeathed in a will as a possession of an elderly plantation owner. Melvinia, whose bloodline traces directly to Michelle Obama’s mother Marion, lived in Atlanta, Georgia as a free person and eventually gave birth to a son named Dolphus T. Shields fathered by an unknown white man.

If not for the dichotomy of the overbearing plantation-owner attitude both she and Barack Obama demonstrate–Michelle Obama’s inspiring roots would otherwise be compelling.  In spite of her heritage, it is apparent that neither she, nor the President desire an emancipated America, but rather envision a nation where free citizens become bondservants to the communal effort of a self-appointed taskmaster.

Obama’s approach toward government indicates that he identifies with the slave owners not with the slaves who reside in Michelle’s family tree. Obama should hearken to the words of Abraham Lincoln who poignantly expressed in an April 1859 letter, “…he who would be no slave, must consent to have no slave. Those who deny freedom to others deserve it not for themselves.”

Demanding unquestioning submission, Obama has set about using liberal principles laid as a horsewhip to the back of freedom.  Obama offers the false promise of free honey – beckoning Americans inside the gates of the plantation herding them into the field to work with the goal of collecting sweat to “redistribute” for the common good.

In an effort to retain power through, “leveling the social and economic playing field” Obama’s slave owner policy initiatives tether Americans to a ball and chain style of socialistic governance that is realized by enslaving those who would otherwise be free. The President’s utopian aspiration is on track to transform Americans into chattel trapped within a restrictive dependency, robbing us of God-given liberty, preventing the acquisition of property and thwarting individual pursuit of happiness.

Obama refuses to appreciate that the type of collectivist schema he campaigns for fosters a shadow of the slavery his wife’s ancestors struggled against. With the blood of slaves running through his beloved daughters veins one would think he would be cognizant of the legacy of ex-slaves who, by their staking out and acquiring wealth and personal property, paved the walkway for his family from Slave Street to Pennsylvania Avenue.

Michelle proudly lauds those in her family, “who out of slavery and emancipation…were smart and worked hard” and because of  “those American values, were able to lift themselves up and begin to set these little foundations that led to me.”  Which begs the question as to why both she and her husband continue to smother those same ideals and instead promote the type of burgeoning debt, which consigns all our children to a form of government imposed slavery? Or, why the Obama administration continues to move forward with plans to impose burdens and regulations that suppress the entrepreneurial spirit that was part of Michelle’s inheritance?

According to the First Lady, it makes sense to her that the patriarch in her lineage was an entrepreneur, who despite slavery, owned property and with “sheer effort and determination was able to build a life.” She then contradicts her own testimony by requiring American citizens “…give up a piece of their pie so that someone else can have more.”  One can’t help but wonder if Michelle would have supported Obama demanding her industrious ancestors relinquish their,  “piece of the pie,” so a select few could benefit at their expense?

Truth is if Barack were in charge it would have been hard for Fraser Robinson, and even harder for Michelle’s mulatto great-great-Grandfather, Dolphus Shields to accomplish what they did. By 1900 Dolphus owned his own home and by 1911 opened his own carpentry and tool sharpening business. Dolphus Shields threw off the bonds of slavery and immersed himself in free enterprise.  The benefits of liberty resulted in Dolphus acquiring the type of private property Obama targets and encumbers through the implementation of communalist policies his great-great granddaughter Michelle defends.

After what Michelle’s ancestors suffered how can Barack, with a clear conscience, endorse the reverse plantation mentality of meting out blood and tears in the form of “redistribution of wealth?” Doesn’t Obama know that just like a slave plantation, every faceless person on his socialist estate suffers–rich and poor alike? Nineteenth century political theorist Herbert Spencer once said that, “All socialism involves slavery. That which fundamentally distinguishes the slave is that he labors under coercion to satisfy another’s desires.”

Based on ancestral sensitivity the Obama’s should be the first to reject that form of slavery and any hint of plantation mentality.  Yet, entrenched in an ideological “main house” they have chosen to ignore the sea of field workers clamoring to retain freedom outside the door. Residing in the lap of luxury, wearing designer couture and rubbing elbows with billionaires Michelle and Barack claim to identify with the, “…scars of slavery that many African Americans still bear.”  But, rather than making them acutely perceptive to the predicament of lost freedom they manipulate family history as a resource to justify enslavement of some for the benefit of others and to substantiate taking millions captive to an aggressive Marxist philosophy.

As a man whose wife is a direct descendent of the legacy of slavery, condoning any human being to labor on an unforgiving socialistic plantation, makes Barack Obama guiltier of exploitation than the anonymous white slavers furtively residing in the darkest corners of Michelle’s family tree.  Barack Obama’s resolve to yoke Americans to an unconstitutional system puts him in the company of those the Great Emancipator, Abraham Lincoln coined as a, “…small, odious and detested class, among you; and yet in politics, dictating the course of all of you, and are completely your masters.”