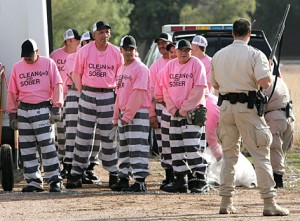 The synergy between the House of Representatives and the Executive Branch is so finely tuned that Nancy Pelosi’s health care bill HR 3962 has finally provided a vehicle for Barack Obama to deliver on the promise of creating shovel ready jobs, specifically in the area of public safety.

According to the US Department of Justice, at the end of 2007 there were 2.3 million people incarcerated and as of 2008 that number jumped to 1 in 100 Americans. If all goes well for Pelosi’s health care bill, that number could more than double, providing a myriad of opportunities to help get the 10% of unemployed Americans back to work.

Extending a hand of assistance to the President’s sagging poll numbers, the Speaker of the House has provided a possible means for employing millions of Americans.  Even in a sluggish economy—opportunities abound.   If HR 3962, which passed in the House, succeeds in passing in the Senate, Obama can rely on ribbons being cut at correctional facilities, jumpsuit factories and correction officer training schools all over America.

The healthcare bill specifies that those who refuse to purchase health insurance and fail to pay the fine of about 2.5 percent of their income, face penalties of up to five years in prison.

Section 7203 – misdemeanor willful failure to pay is punishable by a fine of up to $25,000 and/or imprisonment of up to one year

Section 7201 – felony willful evasion is punishable by a fine of up to $250,000 and/or imprisonment of up to five years.

Constitutionality aside, these premiums serve two purposes.   First, subsidizing a very expensive program on the backs of young people who might normally decide against buying high priced catastrophic insurance policies and second, to funnel heaps of money into insurance company coffers as a means of motivation to sign onto an initiative, which private insurance might otherwise reject.

In the “home of the brave and the land of the free” intimidation, by way of misdemeanor and felony incarceration, has never been a great motivator. Nevertheless, the new Chicago-style formula for a “healthier” nation, more jobs and a better economy has been reduced to coercion and bullying. In a spirit of fairness, kindness and concern for all Americans and to save health care and the economy Obama, Pelosi and company seem more than willing to hold hostage millions of people.

Truth is if 99% of Americans kowtow and pay the mandated $15,000.00 a year for health insurance, as far as response rates go would be an extremely high percentage. Taking that into consideration, the number of Americans over the age of 18, or 1% of 217 million would amount to about 2+ million people who, by law, would promptly be fitted for zebra stripped prison garments.

The possibilities for tax revenue and job creation is endless for a Congress that continues to overstep the limits of its power and push health-care mandates by threatening anyone who doesn’t follow the dictates. If based on so profound an unconstitutional premise, 10% of the population decides to refuse to buy the policy, prison populations could swell nearing 21,700,000, creating lots of those much talked about “shovel ready” jobs.  Yellow Caterpillar backhoes could instantaneously be rolled to various and sundry sites to begin construction on sprawling, brand new prison facilities.

Yet, one has to wonder how Pelosi and Company justify spending an average of $30,000.00 per year to incarcerate people for exercising the Constitutional right of refusing to pay $15,000.00 for a health insurance policy? Notwithstanding, stubborn “Live Free or Die” Americans who persist on being obstinate, whose fines would climb to $250,00.00 apiece with jail sentences upwards to five years.

Obama’s compliance incentives are as ridiculous as mandating all citizens eat apples and penalizing anyone eating a grapefruit and then when appearing in court, having the ticket agent pay double the price of the fine he or she issued the offender.  According to HR 3962 Americans must buy a $15,000.00 insurance policy—if they refuse, off they go to jail where the federal government pays $30,000.00 to teach a lesson about the high price of insubordination—which anyone would agree is pure political genius!

The OBO (Obama Budget Office) fails to realize that for every one individual incarcerated for a twelve months, two health insurance policies could be paid for instead.  But, we need to remember that this brilliant idea was hatched from a President and administration that brags about spending $248,000.00 in stimulus money to create or “save” one job that likely pays less than $50,000.00 a year.

Last year states spent the vast majority of $52 billion on prisons to house 2.3 million inmates, add an impending 2 million, or a 1% insurance infraction influx to that number and costs rise to well over $100 billion.  In order to save on the “high cost of health insurance” the federal government is willing to pay $50+ billion a year to punish those who refuse to submit to tyrannical laws not based on the Constitution? A perfect example of how coercion delivers a poor return on investment.

Touting the historical nature of providing health care as a “right,” despotic Washington politicians continue to define the meaning of “acceptable health insurance coverage.”  In doing so, Democrats in Congress led by Pelosi and Obama are preparing to subject insurance scofflaws to numerous and criminal penalties which, if the bill passes, will imprison millions either behind bars, or shackled to heavy fines, premiums and tax burdens.

In another attempt to convince campaign; Pelosi and Obama could disguise the poison dart in the full quiver of “free” benefits by stressing health care provides a healthier, fairer and more equitable America, as well as millions of jobs for law abiding citizens.  By building and maintaining facilities to house and curtail lawless insurance delinquents, Obama can then persuade America that while enjoying the benefits of universal health care one man’s crime is another man’s job opportunity.

America, face it…there is a new Sheriff in town.  In the meantime, while ground is broken and construction started on thousands of penitentiaries and in exchange for federal clemency, Nancy and Barry could recruit Joe Arpaio to design pink prison garb and tent cities to house felonious Americans. In addition, HR 3962 can replace the Constitution and be ensconced as a manifesto to historical advances in Democrat benevolence. After being merited for saving a flailing economy, the Pelosi bill can also go down in perpetuity as the document verifying that if Liberals are in power freedom goes to prison, while tyranny roams free.