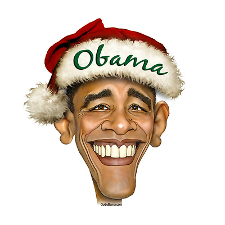 State Police in Pennsylvania are asking for the public’s help in identifying a suspect who robbed a bank in Chadds Ford Township dressed like Santa Claus.  According to police, investigators are seeking a white male, wearing black sweatpants and sweatshirt and a fake grey “Santa Claus” beard.

Santa Claus is the iconic symbol of giving. An ebullient St. Nick spends all year crafting gifts in the North Pole, and then generously loads up the sleigh on Christmas Eve setting out on a global mission to disperse gifts to good boys and girls the world over.

Santa Claus caught on camera a robbing bank is a sure sign the world is in a downward spiral. And why not, ‘Baby face’ Nelson wannabes rejecting clown masks and donning Santa suits represents the present political climate in America.  It was role model, Barack Obama who promoted himself as Santa Claus and then after moving into the White House, whipped off the red Santa suit and transformed into famous bank robber Willie Sutton.

Obama is gracious, well mannered and gentlemanly and an “innovative robber” like Sutton who was renowned for being polite while performing armed robbery.  “One victim said witnessing one of Sutton’s robberies was like being at the movies, except the usher had a gun. When asked why he robbed banks, Sutton simply replied, “Because that’s where the money is.”

For a year orchestrated by a robber pretending to be an usher the nation has been in the midst of an uninterrupted stick up.  Like a movie, Americans have been reduced to spectators observing a burglary by a calm, pleasant bandit finessing money from hard working people, small businesses and the federal budget with such polish and coordination that grand larceny resembles a Radio City Music Hall Christmas Show.

Committing nationwide theft, while pretending to be Santa Claus, is downright blasphemous. If Obama were honest he’d ditch the Santa suit and slip on a pair of green Robin Hood tights. Dressing like Santa, as a precursor to theft, is as bad as a disguising a duck hunter as St. Francis of Assisi or an abortion clinic worker in a Mother Theresa-style sari.

Like Willie Sutton before him, Santa Claus Bandit Barack and his merry band of elves go where the “money is.” Though undeniably a heist, Obama justifies blatant thievery by redistributing stolen possessions from those who earned them to those who didn’t. Donning a Santa outfit the message Obama sends is: This year, children who deserve coal in Christmas stockings will be given brightly wrapped presents and hardworking children get nothing but coal.

In addition to sliding notes to tellers that say, “Scream and I’ll shoot,” Obama also drives the getaway car. Yet, clueless victims affectionately continue to cheer the brigand on.  Some misguided Americans still support a crook while liberal ideology holds economic, social and political futures ransom. A President pretending to be Father Christmas holds the barrel of a policy gun to America’s head demanding pockets be emptied into a socialistic attaché case held open by the person who swore to protect Constitutional rights to private property.

Replete with night goggles and a calculator Obama, in an effort to promote fairness, has spent many years carefully scoping out flourishing citizens to pinch.  Targeting specific economic stratums the Santa Bandit, with “a wink of his eye and a twist of his head” through political maneuvers imposes nothing but dread. Barack Obama issues a disingenuous holiday Christmas message to the nation that the Commander-in-Chief now claims the right to pilfer private property and describe it as giving.

Masquerading as Santa Claus all during the Presidential campaign, Barry Sotoero pledged to deliver a wish list. Crafty candidate Obama told the nation what it wanted to hear promising Christmas morning in America. Duped by Santa Bandit’s empty rhetoric, voters left the ballot booth on Election Day with “visions of sugar-plums dancing in their heads,” unaware that Obama, once in the White House, had alternate plans. Santa Bandit Barack premeditated delivering ill-gotten gains to folks deemed less fortunate from a sleigh filled to overflowing with goods stolen from those who merely anticipated a future filled with Presidential hope and change.

Obama’s socialist intent has always been to shimmy down America’s corporate chimney and initially a majority welcomed the visit. However just a few months after the election more and more Americans clearly began to recognize an imposter was hiding under the fake Santa beard. What Obama fails to realize is that Americans can spot Marxists from miles away, especially when draped in red.

Substituting “ho-ho-ho” with “hands-up,” Obama spent the past year scarfing down chocolate chip cookies and glugging down every drop of hot cocoa leaving not one stray crumb behind for America’s children or even generations of children yet unborn. As trusting tax-payers lay all snug in bed, instead of checking off the electorate’s Christmas list, fake Santa Barack spent the past year attempting to stuff personal property, freedom and independence into oversized legislative duffel bags in hopes of dragging the plunder to a government equivalent of the North Pole.

So, “Yes, Virginia there is a Santa Claus.” However, the only surprise in the empty stocking hanging on the mantle this Christmas morning is the harsh realization that Barack Obama is nothing more than a charlatan.  The President of the United States is a counterfeit Santa, sticking-up the nation like a bank under siege in Chadds Ford Township, Pennsylvania, dressed up and hiding behind a cheap, grey beard.