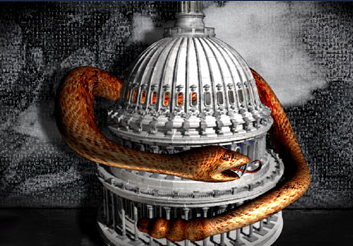 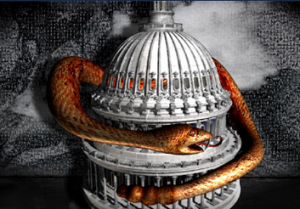 The federal government is once again proving to America unsurpassed mastery at prioritizing pressing concerns when it comes to protecting the nation.  Take for example Interior Secretary Ken Salazar proposing a ban on importation of snakes.  Concerned for the security of 300-million Americans, Salazar proposed, “nine types of pythons and anacondas from Africa and South American be added to a list of species banned from being imported into the United States.”

According to the Interior Secretary, “injurious species” such as Burmese pythons and other types of constrictors threaten lives.  Speaking, as a representative of a concerned federal government, Salazar believes interdiction of snakes a foolproof method to keep Americans out of the path of fang induced envenomation and random snake strangulation–both pressing national security concerns.

The Secretary of the Interior issued a warning that besides strangling more than a dozen people, Americans have caught diseases and died from things like monkey pox from rodents imported from Africa and anthrax from unprocessed goatskins imported from the Ivory Coast.

Not to worry–with Barry, Big Sis and Salazar on the job government officials are addressing foreign reptile invasion.  Airboat ready since 2000 the feds have caught more than 1,200 rapidly breeding constrictors released into the wild in Everglades National Park.  Not to mention the persistent hunting down and identifying smuggled Asian arowana from Malaysia, as well as federal confiscation of agriculturally caustic live snails

In a nation diligent about monitoring illegal entry of reptiles and goatskins into the US, it seems shocking that in addition to over $1 billion dollars in legal wildlife imports, “millions of dollars worth of illegal animals got past Customs agents around the nation.” Illegal animals? What a surprise!

According to Salazar, the federal government’s main concern in limiting snake imports boils down to the safety and wellbeing of America’s children.  Why? Because in June of 2009, “a pet Burmese python strangled a 2-year old girl in her bedroom.” Speaking from JFK Airport Kenneth Salazar informed the public that certain breeds of snake have been responsible for, “at least a dozen people including five kids being killed in the United States by pet pythons since 1980.”

Specific snakes and wild animals prohibited from entering American borders are chosen based on the threat level to wild and human life.  The same criteria should hold true as it pertains to criminal illegal aliens roaming free and “wreaking havoc on the ground.”

Federal banning of imported snakes can’t help but draw attention toward the apathetic attitude concerning 20 million illegals streaming unabated over the southern border. Maybe Salazar could explain to the public why anacondas breeding in the Everglades muster more apprehension to government officials then the illegal entry of Mexican MS-13 gang members.

If child safety is really the issue then Mr. Salazar should take a break from chasing snakes in beach grass and suggest to Homeland Security Secretary, Janet Napolitano that America’s children are at greater risk from undocumented sex offenders than catching monkey pox from African rodents or strangulation by Burmese pythons.

Statistics show that “In addition to suppressing wages, bankrupting our hospitals, and over-crowding our jails and public schools, illegal aliens prey upon children.” So while tax dollars are spent perusing the Florida Keys for anacondas, dangerous Mexican nationals like Julian Vasquez skulk across the border and break into apartments to sexually assault 13-year-old girls.

Not all snakes entering the country are on the list of banned species. Loren Leigh, president of a reptile supply company in San Diego claims, “A lot of these animals aren’t as harmful as they’ve been made out to be — they’re pets being billed as these vicious monsters.” However, within every species there dwells a menacing subclass. This is true for snakes, as well as illegals trying to live “productive, law-abiding lives.”

Within the ranks of illegal immigrants dwells a minority, “bent on indulging in a more predatory lifestyle.” Arizona authorities claim these criminals aren’t “coming over for jobs, these aren’t people trying to take care of their families back in Mexico, they’re coming over to cause havoc.” Border agent Mike Scioli says dangerous criminals are attempting entry into the U.S. along the Mexican border. “We’re talking about major things. Homicides, sex offenders, big robberies, armed robberies–things to that degree.” As a result, like the snake infested Florida Keys, towns and cities in America have been infiltrated by criminal illegals “released into the wild,” overrunning “native species” and drastically impacting the socio-cultural eco-system.

And so a government ambivalent toward open borders and undocumented thugs entering and remaining in America exhibit security concerns by wrestling designer snakes at airport custom’s warehouses. “At Kennedy, inspectors handle all snakes as if they were poisonous — in case the documents accompanying them don’t match the wriggling goods packed in sacks inside wooden crates.” U.S. Immigration and Customs Enforcement (ICE) should be as half as stringent when applying criteria to illegal immigration handling undocumented lawbreakers like toxic reptiles until valid documentation can be verified.

It is a sad state of affairs when government officials are more adept at separating harmless corn snakes from green anacondas then curtailing criminals illegitimately roaming free within our borders.  Shockingly, “Federal immigration officials allowed scores of violent criminals — some ordered deported decades ago — to walk away from Harris County Jail despite the inmates’ admission to local authorities that they were in the country illegally.”  Releasing undocumented ex-convicts onto America’s streets is similar to opening Styrofoam shipping containers full of imported northern African rock pythons in a schoolyard.

The question is, what prevents the United States government from assigning to undocumented criminals the same standards Kenneth Salazar put in place for preventing entry, capturing and deportment of venomous snakes? Someone should inform Barry, Big Sis and Secretary Salazar that instead of herpetological concerns and checking suitcases for live snails, tax dollars would better serve the nation by securing borders and protecting American citizens from undeterred illegal predators slithering like snakes across the border.