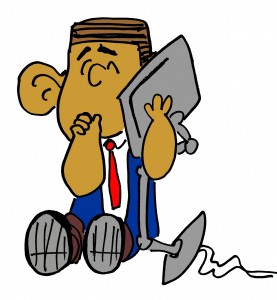 Based on personal experience, conflicted self-promoter Linus Van Pelt lamented, “In this world, there is no heavier burden than a great potential!” Peanuts comic strip character, Linus expressed this confident sentiment, while tightly clutching a blue security blanket, or what in some circles is called, a “Wubby.”

“A security blanket is any familiar object whose presence provides comfort or security to its owner.” The concept of a “security blanket” was originally derived from blanket toting Linus in Charles Schultz’s comic strip Peanuts.  As a result, the term “security blanket” is now used by psychologists to define a “child’s (or anyone’s) excessive attachment to a particular object.”

President Barack Obama is a lot like Linus Van Pelt.  The President is a perplexing contradiction in terms. Obama, like Linus is said to be exceedingly intelligent and full of potential.  A Linus-type philosopher/theologian Obama preaches the gospel of social hope and change.  Linus quoted Scripture, while Obama tends to reference statements similar to those spoken by the theorist, Karl Marx.

Yet while verbally exuding confidence both Obama and Linus are a paradox.  The duo both flaunt self-perceived intellect, while diametrically exhibiting a predilection to insecurity.  Linus rarely appears without a blanket tossed over one shoulder and Barack refuses to leave Pennsylvania Avenue without the teleprompter packed in the presidential U-Haul©.

Maybe the President is cautious because he is aware ardent “supporters have had ample notice that a scripted Obama is far more effective than the spontaneous one?” Linus toted a scruffy blue blanket to summer camp, while Obama took no chances when setting up teleprompters “in the middle of a rodeo ring.” Linus was a thumb sucker and as of late Obama finds himself in “a pile of leaves with a wet sucker.” To insure that he didn’t put his foot in his mouth, Barack strangely depended on the security of a dual set of teleprompters while addressing a sixth grade class full of tweens.

Neither Linus, nor Barry, appear phased by the public’s impression of how dependence on innate objects outwardly reveals inherent uncertainty.  Both appear more focused on the personal sense of security than concerned about the possibility of public ridicule.

Similar to the self-doubting comic strip character, Obama promotes the overconfident attitude of Linus in a snow fort. When reading from a display device Obama may as well publicly quote Linus and say “I am king of all survey! This is an impregnable fortress! No one can take it! I could defend this position from a hundred attackers!” Yet while white knuckling a blankey in the form of a teleprompter Obama seems oblivious to the fact that America is observing inconsistent behavior.

Like a drug addict, Linus Van Pelt exhibited a powerful emotional attachment to a security blanket.  In fact whenever Linus was separated from his fuzzy friend the Peanuts character “went into withdrawal.” According to the Politico, “After the teleprompter malfunctioned a few times… Obama delivered some less-than-soaring speeches, reports surfaced that he was training to wean himself off of the device.” “No such luck” because when “shorn of his teleprompter” what manifests is quite a different Obama.

Those who’ve heard the Orator-in-chief speak without the benefit of a security blanket claim Obama’s “delivery halting and unsure.” Unlike the typical Obama discourse where the “words flow with unparalleled fluidity,” without an inanimate refuge, Obama stumbles “over his phrasing repeatedly.”

In Peanuts Linus’ voiceless blue blanket developed a unique personality just as the POTUS’s teleprompter has been affectionately coined the TOTUS.  In response to being teased, Linus used the blue blanket as a whip, intimidating children who mocked the owner of the blanket’s loving attachment to a friend. In like manner, Barry maintains control over the nation by utilizing a high-tech security blanket beating back critics with  words scrolling across a digital screen.

Lucy Van Pelt, another famous Peanuts character and Linus’ older sister, tried repeatedly to wean her younger brother from his addiction to “blue.”  Lucy took action by throwing Linus’ appendage in the trash burner.  A proactive Lucy even fashioned a kite out of the blanket, buried the binky and cut it into squares for a flannel graph storyboard.  After the recent incident at Graham Road Elementary School, like Lucy, one must wonder whether the President can find the courage to emerge from behind the podium and renounce inordinate attachment to the ever-present teleprompter.

On occasion, Lucy Van Pelt even deemed it necessary to tie Linus’ blanket over her brother’s mouth to stop the boy from making inappropriate comments. Thus, Linus was gagged by a security blanket.  Based on the obvious Linus/Obama similarities, could it be that Barack’s teleprompter holds the key to getting Obama to curtail the endless rhetoric? If Lucy muzzled Linus with the blanket, maybe public mortification can force Barack Van Pelt to lose the worn-out wubby.

To date it isn’t looking hopeful, Obama continues to cling to his electronic security blanket more firmly than those the President indicted for clinging to guns and religion. Thus far, Barry seems unaware that a United States president setting up a teleprompter in a sixth-grade classroom is as pathetic as appearing at a lectern sucking a plastic nipple.

One day an enlightened Linus informed his blanket, “People are beginning to say nasty things about me.  I’m sorry, blanket…I’m going to have to leave you here by the side of the road.” Maybe President Obama, like Linus Van Pelt, will eventually experience a similar epiphany and recognize how hiding behind the teleprompter does nothing more than expose Obama’s justified insecurity.