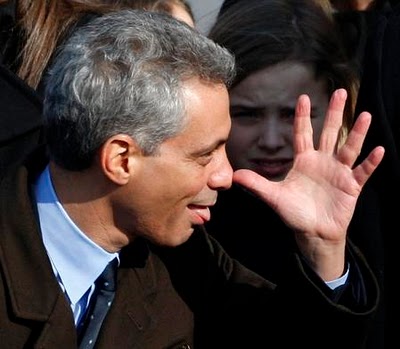 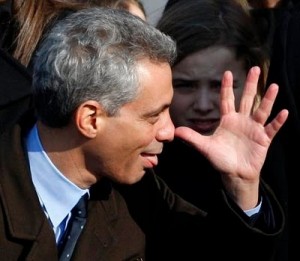 Not since Paula Jones suggested Bill Clinton proudly possessed a “distinguishing feature” have things in Washington DC gotten tawdrier.  Why?  Because when the curtains were removed from the Congressional showers more was exposed than Rahm Emanuel’s bare butt?

Imagine your first eight weeks in Congress, in order to familiarize yourself with the territory you decide to work out in the collegial Congressional gym.  After working up a sweat you go to the locker room to find the curtains curiously removed from the shower stalls.  Looking past groups of naked men milling around in various stages of undress, you make your way toward an empty stall affording the greatest measure of privacy.

Midway through your shower you realize that standing behind you is a nude man.  Slowly you turn to see who it is.  The hot misty steam reveals the outline of Rahm Emanuel’s ballet trained frame.  Stunned, you utter the polite words, “If you would like this stall, I was just leaving.” Grabbing your soap and wrapping a towel around your waist you attempt to push past Rahm who proceeds to ram his way into the cubicle trapping you inside.  Pushing you against the tile, Emanuel screams spittle laden obscenities chiding you for daring to vote against Obama’s budget.

Sound impossible, well Eric Massa (D-NY) describes such a confrontation with Emanuel: “I am showering, naked as a jaybird, and here comes Rahm Emanuel, not even with a towel wrapped around his tush, poking his finger in my chest, yelling at me.”

Apparently, if scalding hot water, soap in the eyes and pounding half a middle finger on a nude man’s chest doesn’t do the trick, Rahm Emanuel appears willing to revisit Oliver Reed and Alan Bates wrestling naked in Women in Love to get an agenda passed.

Massa, a Democrat, claims Emanuel is the type of political animal so ferocious he “would sell his mother to get a vote. He would strap his children to the front end of a steam locomotive.” So, for Emanuel, it’s no big deal to spend afternoon’s perusing congressional locker rooms, in the buff, intimidating politicians to see things Rahm’s way.

Eric Massa charges he is being forced out of office before the health care vote because Emanuel and Obama know the Democrat, from New York’s conservative 29th district, will vote against it — whether true or not–remains to be seen.  Supposedly unbowed by the initial freshman encounter with Emanuel over the budget, Massa believes that because his is the deciding vote on Obama care, “this administration and this House leadership…will stop at nothing to pass this health care bill.” Thus an ethics investigation into allegations Massa sexually harassed one of his aides recently emerged spearheaded by individuals who climb into shower stalls with sudsy, naked men supposedly to discuss policy.

Evidently, the man at the top “with a mop,” Scarface Barry deploys underling Rahm, aka Frankie Rio to do the dirty work and to clean up loose votes vulnerable to bullying if ambushed in congressional showers.  A nude Rahm Emanuel may think he intimidates members of Congress uncomfortable with being forced to shower in curtainless stalls.  But Emanuel’s unseemly behavior exposes more than what Rahm looks like sans ballet tights– it exposes the Chicago thuggery presently at work in Washington politics.