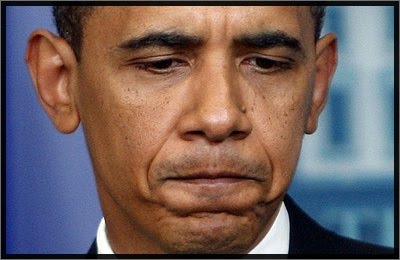 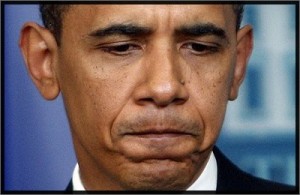 A Washington Post article entitled, Obama’s happiness deficit suggested Barack Obama, “doesn’t seem all that happy being president.” Maybe before applying for a job he was unqualified for, Obama should have visited a career counselor to discuss options more fitting the skill set of a community organizer.

Because based on opinion polls, 54% of the nation disapproves of Obama’s first year of on-the-job training, indicating Barry isn’t the only one presently dealing with job dissatisfaction. Insistent about stepping into a position he was incapable of handling Obama saddled the nation with an obviously, “…frustrated, discontented, unqualified employee,” whose shoddy job performance is mirrored by the President’s dismal facial expression.

The Washington Post article acknowledged that although Obama is doing the “world’s hardest job,” by and large Americans would prefer the president, “…relish the challenge.  They don’t want to have to feel grateful to him for taking on the burden.”  After all, “He did ask for this job; we didn’t make him take it.”

Truth is illegitimately assuming a duty you’re ill equipped to handle always results in less than thrilling results. Barack Obama is a troubled sartor, after disingenuously promoting presidential proficiency on ability to sew on a button; the tailor faced open heart surgery. Scrubbing up prior to operating was one thing, but midway through the procedure a hemorrhaging patient, close to flat lining, stole the President’s joy.

After the worship service at INVESCO field, Obama must have thought the presidency was a continual confetti shower where every one of his proposals would be met with rousing cheers and unquestioned acceptance.   Maybe for Obama, winning was the job?  Following the Inaugural Ball Obama appears inconveniently annoyed by Executive burdens and according to the presidential inner circle, Barry would rather have dinner with Michelle than deal with crowds on the campaign trail, or “horse-trade or arm-twist” to save health care reform.

Apparently, Obama is happier playing basketball than he is “chewing over events” with aides after a grueling day in the Oval Office.  What better way to ignore inadequacy than to go a couple of rounds of one-on-one, where each swish reestablishes lagging self-confidence?

Let’s remember Obama never held a real job.  Maybe the President is shocked to find out this is not a nine-to-five gig?  What started out with conga parties, Wagyu beef and date nights has quickly devolved into gloomy first year interviews with People Magazine where Obama, in hushed tones, expressed, “the loneliness of his decisions on war and terrorism that one could hear between his words the tick of an old lighthouse clock across the room.”

What happened to the salsa dancing “macho” man who cut up the rug with Thalia? Obama’s inability to clock out of job responsibilities such as war, recession and a collapsing economy appear to be dampening a celebratory atmosphere.

It’s downright depressing. Barack Obama’s vision for international relations involved idealistic plans for negotiations without preconditions. A year later, instead of global camaraderie, Obama’s relations with many foreign leaders are at best “prickly.” Barry’s impractical policies have delivered presidential pleasures on par with swallowing a prickly pear cactus without removing the barbs.

Originally the “administration didn’t come to town with the sense of weariness and duty it now projects.” However, it is undeniable being in an awkward position exhausts and saps joy out of any occupation. The President’s unhappy lethargy is valid after Obama illegitimately accepted a job requiring experience and maturity to navigate-neither of which he possesses.