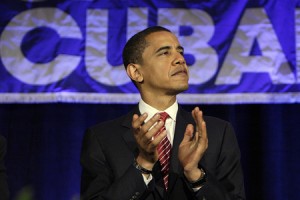 Castro is the architect of a health care system where patients froze to death in Mazorra mental hospital and where, according to John Stossel, Cubans are “crazy with desperation because of poor-quality care.” This man considers Barack Obama’s victory “miraculous.”  Amidst the kudos, Fidel chided Obama only for “taking so long to enact what communist Cuba achieved decades ago.” I say, Hallelujah!

Obama Care has plans to fund Community Health Centers similar Cuba, where clinics are “in every neighborhood.”  If all goes well, America too can attain low infant mortality rates by adopting objectives touted by Cuba. Take for example “Cuban obstetricians aborting fetuses when they think there might be a problem,” keeping infant mortality rates low in Cuba.

Cuban defector Dr. Julio Alfonso admitted personally participating in “70-80 abortions a day.” As the Obama “miracle” continues to mature, American doctors may one day possess a similar “right to choose” on behalf of the common good, regardless of whether mother’s agree, or not.

Cuban doctors have even admitted that, if a baby dies a few hours after being born, the child isn’t counted as ever having lived.” Cuban policy may explain Obama’s opposition to the Born Alive Act, which proposes administering medical assistance to children born alive during botched abortions.  Obama’s obvious objective is the accurate maintenance and integrity of birth data.

It’s comforting to know Fidel and Barry agree concerning insurance industry “mercenaries.”  Greedy Cuban doctors make $15.00 a month, avaricious private hospitals and clinics are non-existent and drugs are hard to come by.  Dealing with gluttonous leeches, like physicians and pharmaceuticals, are long term objectives the Obama administration can address in its unyielding quest to “strengthen the president’s hand against lobbyists and mercenaries.”

According to Cuban leadership Cuba is a great and benevolent world power. “Cuba provides free health care and education to all its citizens, and heavily subsidizes food, housing, utilities and transportation, policies that have earned it global praise.”  Emulating the Cuban success model, Barack Obama has put government in control of health care, student loans, mortgage companies, banks and car companies.  The dream of government food subsidies is likely one health-care reform heartbeat away.

One thing, Fidel criticized Obama for was “lack of leadership on climate change and immigration reform.”  Castro is either impatient or uninformed; Barack Obama is on the policy precipice of pushing through cap and trade and immigration reform, which should accomplish government control of utilities and cement Obama an extended stay in Washington DC in a fashion Zimbabwe Dictator Robert Mugabe would applaud.

Fidel failed to mention, but is likely also very impressed with Obama’s successful effort undermining private sector employment, while government jobs are on the upswing, similar to Cuba where 75% of the labor force is employed by the state.

If Obama’s “miraculous” health-care reform runs into budgetary issues in the future, further guidance can always be gleaned from Obama’s obsequious Cuban mentor.  Fidel Castro is chock full of inspirational, health-care reform, cost saving ideas Obama can  glean from–such as, “a man should not live beyond the age when he begins to deteriorate, when the flame that lighted the brightest moment of his life has weakened.”  Now that’s a socialistic idea that may well make its way to our shores from Cuba, similar to how refugees float to America on inner tubes, slowly, but no less determined.