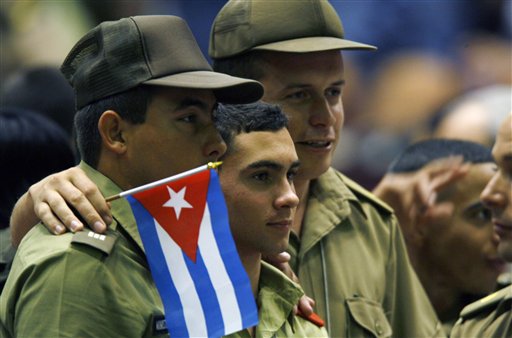 Elizabet Broton, Elian Gonzalez’s mother, was so determined to ensure her seven-year old son live in freedom that at four a.m. the fraught woman ushered her child toward a rickety boat to join a dozen people for a trek across dark, choppy waters from Cuba to the U.S.

Elizabet and ten others lost their lives at sea. Before dying Broton desperately attempted to assure Elian’s safety by placing the boy into a black inner tube to keep him from drowning. Elian was later found sleeping, fished from shark-infested waters and turned over to the U.S. Coast Guard.

Elian became the center of a child custody struggle defined by paternal rights versus a Cuban-American family who escaped Castro’s tyrannical regime that believed the child should be granted asylum.  Elian’s cousin Marisleysis Gonzalez became the public spokesperson for the child’s right to independence in a nation his mother died trying to reach.

After a lengthy, media driven custody battle Attorney General for the Clinton Administration, Janet Reno ordered armed federal authorities to enter the home of Elian’s extended family and intercept the child, returning him to his father Juan Miguel Gonzalez Quintana.

As Elian was placed into the elder Gonzalez’s arms Elizabet’s death was officially for naught.  Hope for Elian growing up liberated disappeared beneath the cold, murky waters between Cuba and the U.S. like a mother failing to find safe haven for an only child.

Fast-forward ten years and take a glimpse into Elian’s life as a teenager. Instead of a Miami Dolphins Jersey, “Cuba released photos of one-time exile cause celeb Elian Gonzalez wearing an olive-green military school uniform.” Elian Gonzalez is what youthful subjugation looks like when a boy, a heartbeat from freedom, is deprived the liberty Little Havana fought to hard, but failed to deliver.

In Cuba, Elian is a hero. Yearly, Fidel approved celebrations marking Gonzalez’s birthday because Elian epitomizes the height of Cuban triumph over America.  Lest we forget America willingly acquiesced in the battle to grant a defenseless child freedom, choosing instead to don riot gear and send a terrified child back under Castro inflicted bondage.

If Elian had been granted asylum, today he would be a teenager preparing to go to college with every opportunity for success ahead of him.  Instead, on the cusp of adulthood, Elian poses for propaganda photos sandwiched between Cuban army soldiers attending the Union of Young Communists congress in Havana.

Wonder if on the night Elian was placed in that doomed rowboat, Elizabeth envisioned, “Gonzalez formally join[ing] the Young Communist Union?”

To this day, Elian and parliament member father Juan Miguel are both closely monitored by state authorities who restrict the duo’s contact with the international press-unless of course it serves Cuban cant to put forward the image of Elian as a contented, committed Communist.

The youthful Gonzalez should have been wrapped in the America flag.  Instead a boy who once represented the quest for the God given right to be free, waves a Cuban flag symbolizing poverty, oppression, authoritarianism and misinformation.

As Barack Obama emulates Fidel Castro’s health care system and ferries a reluctant nation toward socialism, the scenario is reminiscent of a frightened Elian Gonzalez being wrested from the arms of libertyby an out of control federal government dictated to by a liberal American president.

Free people should take a good, long look at Elian Gonzalez and observe what our nation has the potential to become ten years down the line if, instead of moving in the opposite direction, America’s row boat continues to inch closer to Cuba’s shores.