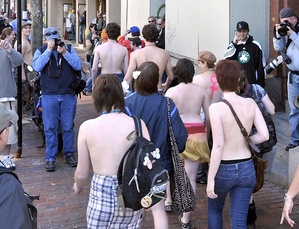 Exhibitionism is indecent exposure or the showing of private parts to strangers.  Exhibitionism also includes acting or behaving in a manner that would call attention to oneself.

Take for example individuals who tattoo their whole body including their face.  There was a time when people would pay money to see tattooed freaks as side shows at carnivals; today carnivals have spilled over into everyday life.  Yet oddly the modified oftentimes react negatively if people do what exhibitionists dare them to, which is gawk.

How about body piercing and ear lobe stretching, both of which insert foreign objects into skin calling attention to 3 inch spikes through nostrils and lips, one dare not look because common folk, with earlobes 5x the size of normal, get offended if you do.

The message: Exhibitionists, although on display prefer not to be noticed.

Reason being, defiling your body with pictures of birds, snakes and obscure Chinese proverbs are exercises in extreme individualism.  Full body tattooing screams distinctiveness, even though every one in crowd has tattoos–the new individualism is a  mentality where branding sets you apart from the herd.

Recently, another group of liberated exhibitionists took to the streets of Maine. Topless women decided to send a message about equality by descending upon downtown Portland sans modest covering from the waist up.  Maine’s nudity laws do not apply to bosoms, just genitals (thank you God). In response, female liberator Ty MacDowell organized a bare your breasts event to, if you can believe it, “bring attention to a double standard,” which bears repeating, “double standard.”

Then the unexpected happened, something Ty and her bevy of boobs never expected, “Some peoples’ jaws hit the ground… including parents with children – were just plain offended as dozens of woman walked through downtown Portland without tops on.”

Similar to an annoyed Stop and Shop cashier, with a razor blade sticking out of his cheek, asking the preposterous question, “What are you staring at,” MacDowell was astonished interested men showed up with cameras. “I’m really upset by the men – all the men that are here, just like watching it like it’s a parade.”  One participant shouted, “We should be able to walk down the street and not have this many men taking pictures of us.”

Ty McDowell, who organized the march, said she was “enraged” by the turnout of men attracted to the demonstration. The purpose, she said, was for society to have the same reaction to a woman walking around topless as it does to men without shirts on.

Do liberal women believe daring behavior can dictate male hormonal reaction?  Women like Ty McDowell are liberated enough to strip from the waist up, but are offended when bare teats are the object of staring? Liberal women want to be accepted in all their womanliness, but disrespect men behaving like males—talk about double standards.

McDowell said she plans to coordinate similar demonstrations and said she would be more “aggressive” in discouraging ogling.   Maybe confused exhibitionist Ty McDowell should exercise the height of aggression by denying those with a tendency to offend women the opportunity to do so by keeping her Obama T-shirt on, instead of taking it off.