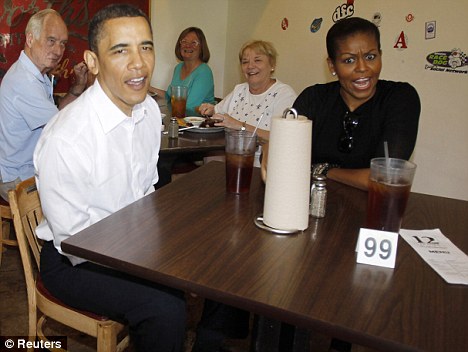 While Americans don’t begrudge the President a hearty meal, a round of golf or a family weekend, what they do resent is being told the Obama’s are taking a “middle class” getaway and then finding out it’s anything but. “President Barack Obama attempted to highlight how ‘normal’ he is by taking a middle class holiday with wife Michelle in North Carolina.”

The President and First Lady spent the weekend in the Great Smoky Mountains in, Asheville, NC taking a “Let’s Move” hike in the woods and eating at 12 Bones Smokehouse, which asks the probing question, “Like beer and smoked meat?” In the spirit of the recent New York City tasting tour, where pork aficionado Michelle visited Dinosaur Bar B Que, 12 Bones specials like Hogzilla should have provided the duo a complimentary side order of Lipitor.

While the Obama’s did step down to mingle with the regular folk, the couple forgot to ask Motel 6’s Tom Bodett “to keep the light on” for them. Instead denizens of “middle class” accommodations, Barry and Michelle, chose to stay at the Grove Park Inn, a top-10 Luxury Spa Resort.

In the name of healthy living, Obama walked off carbohydrate-laden corn based pudding and bread on the golf course, while the FLOTUS tore up the tennis court fueled by macaroni and cheese. Although unable to be officially confirmed, rumor has it Michelle visited the Grove Park Inn spa to avail herself of luxurious choices ranging from a $250-dollar Mountain Honey Wrap, to an economical $100-dollar Walk in the Clouds pedicure.

Aware that the White House won’t always be home, Barry and Michelle also took the opportunity to checkout local real estate. The Camelot conglomerate toured the Biltmore Estates a French Renaissance-style manor in Asheville built by George Vanderbilt II in the late 1800’s, “one of the most prominent remaining examples of the Gilded Age.”

Although always eager to identify with evangelical Christianity the president apologetically “turned down an invitation from Crossfire Ministries to play in the annual All-Star game.” The reason? — Barack promised to take Michelle to dinner. God Himself knows better then to come between Michelle and Macadamia Nut Pesto Grilled Mahi-Mahi with Pineapple Salsa.

After touring Biltmore Estate the Obama tour group dined in a nearby restaurant called the Corner Kitchen, not to be confused with a “middle class” Smokey Park Highway favorite Country Kitchen, home toPancake Perfection.

On Sunday, in an effort to redeem choosing Tomato Ginger Cioppino over Gospel golf, Barry visited 91-year old renowned evangelist Billy Graham. Billy and Barry were joined by Franklin Graham the honorary chairman for the National Day of Prayer Task Force, a group banned from the National Day of Prayer for being “exclusively fundamentalist Christian.”  Despite praying with both men, thus far the President of the United States has not vetoed the Army’s decision to disinvite Franklin Graham from attending prayer day at the Pentagon.

President Obama left the First Lady to join Joe Biden at the memorial service for victims of the WV mining disaster and told mourning families that while golfing his, “heart ached” over the tragedy. Winding down “middle class” spring break, son of a coal miner’s daughter, Barack Obama, commemorated the twenty-nine “middle class” miners that “ lived — as they died — in pursuit of the American dream” similar to the one only the grief stricken president has the benefit of enjoying.