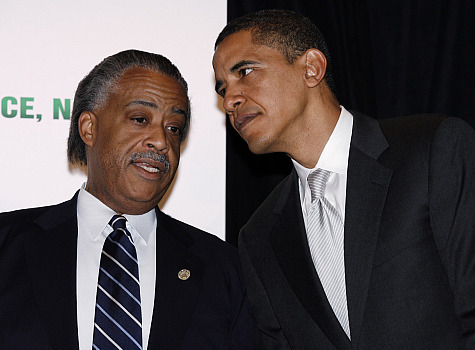 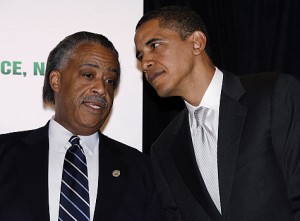 Obama’s Harvard Law School professor, Charles Ogletree recently spoke about the National Action Network leader saying, “Sharpton is a conduit between the disadvantaged and powerful leaders.” Ogletree maintains the civil rights activist  “has access to both the streets and the suites, to make sure that the people who are voiceless, faceless and powerless finally have some say,” People such as ½ million voiceless, faceless and powerless criminals carousing the streets in Arizona?

According to Ogletree, on the streets Reverend Sharpton is President Obama’s “lightning rod.”Sharpton maintains that when invited to the White House it’s not as a mere visitor, but as an “administration ally.” Working in tandem, Barry designs the sandwich board and then sends Al Sharpton to lead the parade.

Now it appears as if Al has been commissioned to head westward toward the Grand Canyon to protect Obama’s true agenda.Mouthpiece Sharpton will speak on behalf of America’s post racial president who condemned Arizona’s immigration bill as being, “irresponsible,” “unfair,” and potentially “illegal.”

Inundated with immigrants from Mexico and Central America the state of Arizona instituted an immigration law that is the toughest in the nation.  The bill “toughens restrictions on hiring illegal immigrants for day labor and knowingly transporting them.”  The Arizona law also, “requires local police to stop and demand proof of citizenship from anyone suspected of being an illegal immigrant,” but critics such as Barry and Al believe imposing the law encourages racial profiling.

In response, Al is primed and pumped to disobey civil law, which is loosely defined as”an effort to induce change in policy or legislation, through passive resistance or other nonviolent means.”  Does Sharpton really believe defending those who live outside the law exposes true racial injustice?

Sharpton vows to descend on Arizona with “freedom walkers” from across the nation. “Where we will walk down the streets with no ID and submit ourselves to arrest.”  Sharpton asks, “what is the difference between us and any Mexican or any Haitian or anyone else?”  For U.S. citizens, there is no difference.  However, disparity exists if picked up without documentation, making catcalls in a foreign language, while riding shotgun in a Chevy El Camino.

Sharpton voices the opinion that, “This law is anti-American, it’s anti-Latino, its anti-immigrant, it is unconstitutional.” The always-debonair Al remains eager to scuff up a perfectly good pair of Berluti shoesto passionately prove, regardless of skin color, intruders breaking the law, should be allowed to continue breaking the law.

The Reverend Sharpton stated the Arizona bill is “like a malignant tumor. A tumor in the state of Arizona that if we allow it to grow and fester-will become a cancer in the entire country.”  Hey Al, a deadly tumor isn’t always a bad thing like when terminal cancer kills off a death row inmate before having to expend cost and energy to administer a lethal injection.

Either way, Sheriff Arpaio is on the job and ready outfit hair coiffed civil disobeyers in fashionable prison garb.  So before Al makes a firm commitment to be arrested in Arizona maybe the reverend should cover all bases by making sure inmates of Tent City have Joe’s permission to use hairspray.