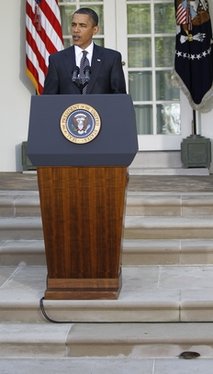 Symbolic omens aside, the fact that a black rat ran in front to the podium, while Obama was speaking is more than exceedingly appropriate.

The President has spent days, talking down America, flouting the rule of law and siding with a foreign leader against the nation he leads.  In one horrendous declaration after another, Barack continues to drone on and on.

Today, making a triumphant statement about the “end of a Senate filibuster on his financial overhaul plan,” a fitting guest made a dual appearance in front of the podium, stealing the show from the President.

Obama had just begun an afternoon statement to reporters lauding the end of a Senate filibuster on his financial overhaul plan when some kind of rodent – opinions differ on which – dashed out of the bushes to his right, just outside the Oval Office.

The little furry “critter trundled straight past the gray podium with the presidential seal and made a bee-line for another set of bushes to Obama’s left.”

Figures, Obama’s left side always finds a way to manifest itself, regardless of the state of affairs.

It appeared as if the president didn’t even notice the “rat,” which is understandable based on habitual self-absorption, coupled with Obama’s familiarity with the party in power.  For Barack Obama one rat, more or less, is inconsequential.

After the rat ran by, Obama left the podium and retreated to the Oval Office after which, “a fierce debate erupted among the photographers and reporters who’d witnessed the dash. Was it a rat or a mouse? Or maybe a mole, or a vole, or some other kind of related creature.”

If anything, “mole” sounds like a possibility especially after last nights state dinner where Mexican, Oaxacan Black Mole sauce was the highlight of the meal.

However, “this wasn’t the first time a rodent’s been spied in the White House, or even the Rose Garden. Just last week, as camera crews set up for an Obama statement on the Gulf oil spill, what’s believed to have been the same rodent made a dash across the famous garden.” Kind of like a rat monologue.

Apparently, in the past there has been at “least one rat sighting,” in the White House briefing room, “though that was before a multimillion-dollar rehab project was finished by the Bush administration.”

Lately, however, the same rat pretty much shows up whenever Obama is either preparing to, or in the process of, opening his mouth.

Although, “rodents of all kinds are pretty common in Washington. From time to time, city officials issue alarms about surges in the rat population when residents put out extra-big summer piles of garbage.”  Which explains the recent phenomenon, the Resident-in-Chief, sets out big piles of rhetorical refuge and a Rattus rattus shows up.  Or maybe the rat shows up beforehand, no one knows for sure.

So either the rat feels comfortable around Obama, or Obama is putting out so much garbage that its time to issue a national alarm because the surge in the rat population is up  at least by  one.  Or maybe Barry is just feeling lonely and found a new friend named Ben

Regardless of the reason for the rat sightings, it appears something definitely has to be done about the rat presently residing at the White House.