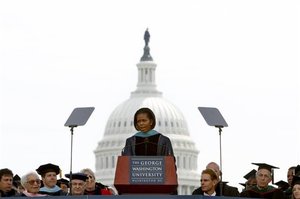 Rather than tossing a graduation cap into the air, Michelle Obama’s commencement address at George Washington University was enough to make a graduate fall on the ground weeping in a heap of despair.

After accomplishing the goal of completing a college education, the last thing a collegian should be subjected to on graduation day is a keynote speaker who does anything but uplift, motivate, and encourage.

The First Lady’s GWU commencement addresswould have been more stirring if accompanied by a funeral dirge. Students came to the ceremony hoping to be inspired to take on the world. Unfortunately, notable honorary degree recipient Michelle Obama took the opportunity to burden graduates with a yoke of global guilt.

As she banged the drum for community and public service and placing herself in the position of conscience, free will, and individual charity, the First Lady’s speech gave the impression that if not for her own directional goading, students would, like lumbering oxen, disappear into the vortex of self-interest and personal gain.

The first mistake George Washington University students made was to respond to the maven of public service’s initial commission to volunteer in the greater Washington community. Student willingness to participate in community was the carrot Mrs. Obama used to woo GWU as commencement speaker. At the time, youthful altruism blinded students from recognizing the First Lady’s unquenchable thirst to make community activists out of doctoral candidates.

In response to Michelle’s original challenge, GW students held “food drives, beautified parks and made care packages for our troops,” all commendable contributions. However, 100,000 hours of local community volunteerism, even national volunteerism, while good, came up wanting, because for Mrs. Obama, global citizenry and a lifetime of international commitment are the real objectives.

Michelle lauded graduates not so much for accomplishing the impressive goal of becoming lawyers and physicians, but more for taking winter breaks abroad, spending Martin Luther King, Jr. Day at a D.C. public school painting classrooms, and digging out Foggy Bottom after Snowmageddon. According to Michelle, GW graduates “fully joined a generation of activists and doers,” not by being granted advanced degrees, but rather by teaching Sudanese refugees English in Tennessee.

As if that weren’t enough, Mrs. Obama segued into highlighting events that would encourage any Generation Y-er to rend his garments and clamor toward an escape route leading far from the National Mall.

Trudging through doom and gloom, Michelle peppered the discourse with sprinkles of nostalgia.

I mean, you all have seen so much. Just since you were in middle school, you’ve witnessed terrorism…the cost of war reach into our communities…unimaginable devastation and suffering in the aftermath of a tsunami; a hurricane; and earthquake. You’ve felt the wrath of a recession that’s changed your towns and even your families.

The esteemed Doctor of Public Service plodded on, saying, “Now that’s a whole lot to bear for any generation. So no one would have blamed you had you chosen to hunker down and turn inward; if you had simply focused on making sure that your own lives were secure.”

Question, is “little by little building [your own] nest” somehow wrong or evil?

Discouraging individual ambition, Michelle told students, “We are no longer isolated from what happens on the other side of the world … it’s in our best interest to look beyond our immediate self-interest, and look out for one another globally.”

In other words, rather than letting educational accomplishments provide an escape route, immerse yourself in global misery because “challenges are borderless, from the economy to terrorism, to climate change.” Don’t establish yourself so you have something of value to contribute. No, instead, “just take it global”…whatever “it” is.

Michelle even waxed historical, but not by quoting GW University’s namesake, who said, “It will be found an unjust and unwise jealousy to deprive a man of his natural liberty upon the supposition he may abuse it.” Instead, the First Lady called to mind the inspiring words of Woodrow Wilson, who said more socially progressive things such as “America is not now and cannot in the future be a place for unrestricted individual enterprise.”

Attempting to enthuse, Michelle encouraged Woodrow Wilson-type idealism in the graduates by promoting groups like Teach for America and the Peace Corps. Michelle cautioned the audience to steer clear of negative influences who “warn [graduates] to lower sights … scale back ambitions, or to settle on something”…like starting a medical practice instead of running a lottery to staff a free health clinic in Anacostia?

As a jumping-off point and to weave in that old campaign slogan favorite, “Yes We Can,” Michelle cited the “ills of this interconnected world…hate…need and devastation.” Michelle also reminded students, “Creating anything meaningful takes time. And sometimes, the only thing that happens in an instant,” besides going from kindergarten to the presidency, is — you guessed it — “destruction.”

Michelle encouraged students reach out to others with a “sincere willingness … to share enthusiasm … to keep going to places asking what can you do to lift those places up.” Yeah, like elevating the vision of graduates at college commencement ceremonies where you share rousing words of optimistic admonition.

Revisiting yet again her own blue-collar roots in the South Side of Chicago, Michelle shared how her flawed view of the world changed when global citizen Barack Obama caused her to “consider [her] life as connected not just to [her] country but to the world.” Thus, Michelle Obama was transformed into an international denizen.

Michelle did not disappoint; she threw in the red meat of racism and mentioned the “hardened mistrust” that comes from focusing on “what makes us different — things like color or creed; class or country.”

The First Lady hinted at the belief that only by Americans becoming world citizens will the world see the “true face of America — our generosity, our strength, the enduring power of our ideals, the infinite reservoir of our hope.” Only when people “shattered by catastrophic earthquakes” see “wave after wave of rescuers and doctors and relief workers all wearing the stars and stripes on their sleeves” will the world then be safer and America stronger. What about Homeland Security, missile defense, a strong military, and a secure border?

As a result of Michelle’s oratory, many GW grads likely were gripped to the core by depression, fear, and anxiety, and tending toward weeping and gnashing of teeth. Yet the graduating class was forced to endure an unending sea of words void of solace or a flicker of hopefulness. Instead, the First Lady rallied sheepskin recipients to choose a dismal collective vision of social justice fueled by government-inflicted self-reproach and guilt.

Mrs. Obama ended a keynote speech, whose content largely exhorted the forfeiting of primitive ideas of individualism and the surrendering of obsolete concepts of American exceptionalism, by calling to mind the most historic of all events ever hosted on the National Mall. Michelle strongly suggested students heed Barack Obama’s lofty call to America by participating not merely in 100,000 hours of volunteerism, or as self-absorbed “graduates” of GW University, but as diplomats of a superior, all-inclusive “global institution.”