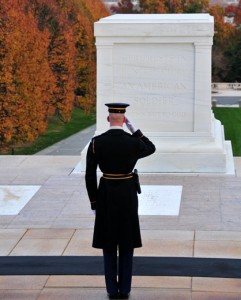 Since Barack Obama took office on January 20, 2009 three hundred American soldiers have given all in service to this nation and more than a dozen were murdered by terrorists on American soil. In March of 2010 the Commander-in-Chief took a surprise junket to Afghanistan and, while there, told troops that the sacrifice the military makes is “absolutely necessary to both America’s safety and world security.”

In that spirit, Memorial Day is a national holiday where Americans pause to honor those who sacrificed life and limb to ensure our nation’s security and freedom. It is a day that commemorates the sobering truth that liberty and security are won with blood and treasure.  This Memorial Day America’s air will be thick with patriotic knowledge that beneath the earth rest the bones and ashes of many a mother’s child whose sacrifices bear testimony to valiant soldiers lost too young to a cause far greater than life.

Situated in the center of Washington DC’s Arlington National Cemetery is the Tomb of the Unknown Soldier, engraved with the poignant words: “Here rests in honored glory an American soldier known but to God.” Each Memorial Day mental images are conjured up of statue-like honor guards standing at attention 24 hours a day, 365 days a year alongside that very tomb.

Formerly known as Decoration Day, the last Monday in May also calls to mind the President of the United States being saluted by the U.S. Military Honor Guard.  Then, to symbolize deference to those lost in service to the nation he leads, the President slowly approaches the Washington Square gravesite and solemnly lays a flowered wreath on the sun-bleached crypt.

Although somber and respectful, this Memorial Day will be different because, one week following the death of five troops in Kabul, Barack Obama has decided to forgo the Arlington Cemetery tradition of commemorating dead soldiers and instead intends to fly to Chicago for an extended weekend.

According to a White House press release,

President Barack Obama and his family will travel to Chicago, where they will spend the weekend.  On Monday, the President will participate in a Memorial Day ceremony at Abraham Lincoln National Cemetery in Elwood, Illinois.

After witnessing two brutal terrorist attacks, one at Fort Hood and another at Little Rock and after six-hundred soldiers killed in Afghanistan grew to nearly 1,000; and as the U.S. military prepares for the biggest battle against the Taliban to date –Obama downsizes his personal Memorial Day observance, skips town and kicks back for a holiday in Chicago.

Unfortunately, the Afghanistan and Iraqi war heroes buried in Section 60 of Arlington National Cemetery, whose ceremony Obama has chosen not to attend, will not be returning home for a barbeque this weekend, or ever, for that matter.

Although absent from DC, there is a good possibility epicurean adventurers Barry and Michelle will honor dead soldiers this Memorial Day by visiting a trendy Chicago eatery or two, trailed by a gaggle of paparazzi.

It’s great to know Barack Obama will be relaxing during a “casual” weekend with friends while Operation Hamkari Baraye Kandahar gets underway and as Joe Biden lays a wreath on the Tomb of the Unknown Soldier for a vacationing President who seems unwilling to suffer the smallest inconvenience to honor those who sacrificed everything.