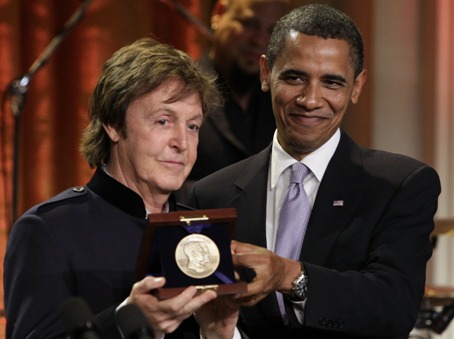 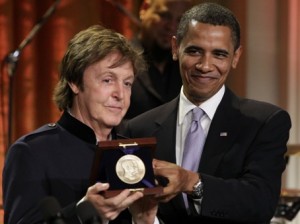 Nothing, not even a flotilla, sludge creeping toward the Florida panhandle or bribery charges could stand in the way of cultural Conga night, better known as Wednesday at the White House.

The most recent musical guest to perform live in the East Room was Sir Paul McCartney.  Music aficionado and world-renowned expert Barack Obama presented the ex-Beatle with the Library of Congress Gershwin Prize for Popular Song.

Mr. McCartney, still sporting a head full of hair and already four years older than sixty-four, is the third winner of the Gershwin Prize, the highest American award for popular song. McCartney is the first, non-American recipient of the award, a revelation that coaxed a “We stole you” comment from Obama, who may also fall into a first, non-American category.

Paul McCartney’s music apparently had the “White House in flames.”   The ex-Beatle kicked things off with a “rocking rendition” of “Got to Get You into My Life,” which had the East Room occupants “on the edges of their seats.” Mr. McCartney also sang the unofficial Obama theme song, “Let it be.”

Meandering down a “Long and Winding Road” of empty rhetoric President Obama did the honors and introduced McCartney. Interjecting politics into a music award venue, Obama vowed to “see to it,” that the lives and communities of Gulf residents are “made whole again” but, as usual, failed to elaborate.

Metaphorically speaking, Obama credited the Beatles with ushering in “an era of endless possibility and of great change,” but the President’s words were tinged with visionary nuances of an even greater “rock star.”

Immediately following the President’s monologue, Young Boy Barry was affectionately praised by the guest of honor.  An ebullient McCartney appeared more excited about being handed a lifetime achievement award by an underachieving Taxman than he was receiving homage for fifty years of musical accomplishment.

“Getting this prize would be good enough,” Mr. McCartney said. “But getting it from this president…” brought an adoring grin to Paul’s cherubic face.

The evening was supposed to be about McCartney but, as usual, attention turned toward Obama when Paul mentioned the self-inflicted “difficult times” the president is presently undergoing.  Paul assured Barry “billions of us … are rooting for you.” Apparently, the President remains Paul’s  “Hope of Deliverance” despite Barry’s 46% approval rating,

A liberal gathering would be incomplete without at least one Bush joke.  Sir Paul didn’t disappoint.  After thanking the Library of Congress Paul said, “After the last eight years, it’s great to have a president who knows what a library is.”

If mentioning the Library of Congress brought to mind Bush’s supposed library lack, maybe humming a few bars of “Yellow Submarine” could conjure up inspiration for Obama to address the oilrig crisis in the Gulf of Mexico.

McCartney and Obama were not the only superstars in attendance.  Elvis Costello sang “Penny Lane,” in honor of the penniless street where all Americans presently reside. Stevie Wonder did an apropos rendition of “We Can Work It Out,” for those in attendance who’ve compounded America’s problems.

The evening ended with a McCartney-Obama family sing-a-long to “Hey Jude.” Maybe after Conga night Obama, who “carries the world upon his shoulders,” can persuade Sir Paul to assist in the Gulf by burning off the glut of crude oil, like a rock and roll fire boom, by singing “Fixing a Hole.”