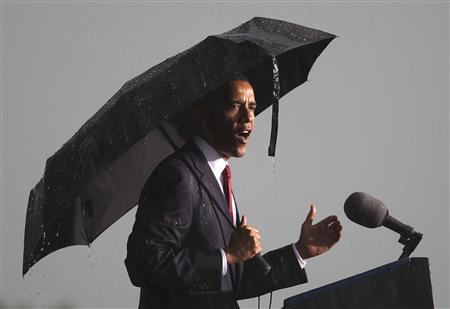 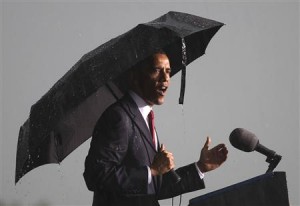 Last week, when Obama stepped up to the podium, in the Rose Garden a rodent showed up. Obama didn’t notice.

Memorial Day, Obama stepped up to the podium to speak at the Abraham Lincoln Ceremony and “bolts of lightning, booming thunder and torrential downpour” followed.  This time, Obama was forced to notice or be impaled by a bolt of lightning.

Barack should have stayed in Washington DC where a US president belongs on Memorial Day. It was there that the sun was shining when Vice President Joe Biden, in the vacationing President’s stead, laid a wreath at the Tomb of the Unknowns in Arlington Cemetery. Biden paid honor to America’s fallen heroes saying,

Today is a day [in] which sorrow mixes with incredible pride, Biden said. We mourn those we lost and we hold fast to their memories. … May God continue to bless the memory of all those who have died [so] that we may live.

Fresh from a barbeque with friends, instead of sharing prepared remarks in Chicago, President Obama was forced to shelter his glorious personhood beneath a stadium umbrella.  Shouting loudly above turbulent weather conditions, Obama urged crowds to take refuge from the downpour.

Concerned only for “wanted” children, a child-friendly President entreated the crowd saying, “We don’t want to endanger anyone, particularly the children, in the audience. A little bit of rain doesn’t hurt anybody, but we don’t want anybody struck by lightning.”  Obama may have had some sentiments to share, but apparently, a voice louder and more powerful than Barry’s had other plans

The president may have had sincere sentiments to share about fallen heroes on Decoration Day but apparently, a more powerful voice was speaking up. “Listen closely to the thunder of His voice, And the rumbling that goes out from His mouth” (Job 37:2).

A couple of weeks ago Obama spoke in the Rose Garden and a rat stole the show.  Obama attempted to speak at Elwood cemetery, the clouds opened and God drowned out the President’s voice with claps of thunder, lightning bolts and driving rain. Genuine intervention was on full display as divine power set the stage and then delivered the address, which caused an exceedingly arrogant politician to high tail for cover.

It must be frustrating for a calculating individual like Barack Obama to be victimized by out of control circumstances. Barack shunned being dictated to by American tradition and instructed the nation about presidential autonomy by choosing Chicago over Memorial Day at Arlington Cemetery.  Then suddenly Barry lost jurisdiction over an erroneous choice by being surrounded by a tempest “so loud his words could barely be heard through the amplifiers.”

“And he arose, and rebuked the wind, and said unto the sea, Peace, be still. And the wind ceased, and there was a great calm,” (Mark 4:29).  On the other hand, it was quite the contrary in Elwood’s Abraham Lincoln National Cemetery because, after a half-hour, “it became obvious that the storm was not going to ease…Obama would not make his speech.”

Before the storm, Obama silently laid a wreath at another part of the graveyard and stood head bowed in reverence as a bugler played “Taps,” also called “Day is Done.” Unbeknownst to the President, Obama-makeshift Memorial Day festivities were what was about to be laid to rest.

In recent days, America’s very own man-god has been forced, one too many times, to humbly submit to something other than a huge ego.  Therefore, after being embarrassingly shut down by divine-directed-weather one can only hope, for Obama’s next attempt at verbal communication, the weather holds and vermin don’t re-emerge in front of the presidential podium.