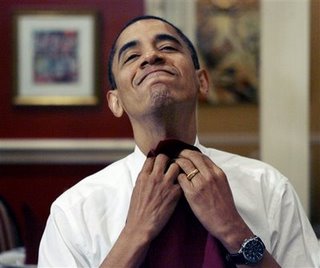 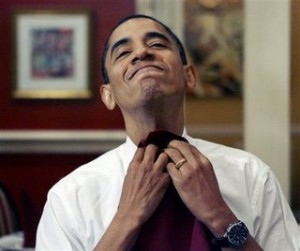 Barack Obama has one helluva appetite.  Wherever Obama goes, food follows. Take for instance his statement about the injustice of Arizona’s immigration reform bill.  What came to Barry’s mind?  Ice cream.  Expressing disapproval for a “misguided” bill the President said, “Now suddenly if you don’t have your papers and you took your kid out to get ice cream, you’re going to be harassed.”

Now another opportunity to meld food and oil into an epicurean object lesson has surfaced in the Gulf.  Professional-vacationer Barack Obama visited the Louisiana coast for the fourth time and while eating shrimp boats full of crustaceans “implored Americans to visit southern tourist beaches,” despite the oil disaster.

The message: Pretend, if you can, that petroleum tar balls are beach balls.

Obama plans to stay for two days, which works out to six meals, not including snacks. Thank God, Obama had a snow cone and not taffy oil-laden, salt-water and all.

Louisiana wetlands and beaches have “suffered from a thick soup of oil that has washed ashore, killing sea life and birds.”  In the coming days, Obama should address the “soup of oil” issue with a steamy bowl of gumbo or turtle chowder.

Tourism and food are two key industries threatened by the BP oil disaster.  Apparently, the “Yes We Can” president believes showing up on the beach and chowing down on fried shrimp is what is needed to convince Americans to slip on a Speedo and head south for a shrimp-filled summer.

In actuality, the President is sort of on a mid-week mini-vacation.  One of the goals is to reassure Americans that many of the Gulf Coast beaches have not been affected.  Obama said, “We just want to make sure that people who have travel plans down to the Gulf area remain mindful of that.”

“If people want to know what they can do to help folks down here, one of the best ways to help is to come down here and enjoy the outstanding hospitality.” Full of bayou buoyancy Barry stopped short of donning goggles and doing a backstroke through crude oil to prove Louisiana’s beaches are safe.

With “1.8 million gallons” of oil a day pouring into the Gulf of Mexico, the best way to alleviate anxiety is to order up some Gulfport goodies for lunch with tartar sauce on the side.  Obama believes eating on camera is one way to “show Americans that seafood from parts of the Gulf coast not under the fisheries ban over the oil spill remained safe to eat.”

Eating “safe seafood” brings to mind Americans opening doors to census workers and finding out, after the fact, that they were visited by registered sex offenders.

Evidently, an environmental disaster is no excuse to cancel the party. In the next two days, Obama plans to visit Mississippi, Alabama and Florida, whose tourism has been impacted by the oilrig disaster.  The three states hold the promise for Obama of mud pies, oysters and Floribbean food.

Americans should breathe a sigh of relief. Although oil has been gushing into the Gulf of Mexico for over six weeks, the President’s historic appetite has not decreased in the slightest and may even be key to solving the largest environmental crisis in American history.

Obama goes to the Gulf and drinks a Bushwacker! 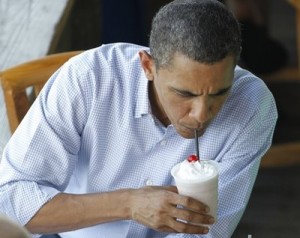 Barry topped off his epicurean tour of the Gulf by drinking a Bushwacker a drink made of cream of coconut (takes one to know one), Kahlua (for Barry’s Hawaiian heritage wink, wink), black rum and dark creme de cacao and milk (for evenly distributed racial diversity).