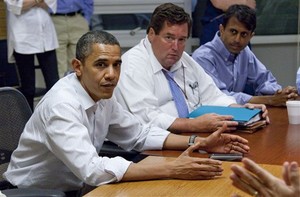 Sand berms are an insurance policy meant to protect the Louisiana coastline from oil spill damage.  The Louisiana sand berm venture involves moving “sand from a mile out in the Gulf of Mexico and pumping it closer in to shore to build manmade barrier islands.”

Nevertheless, lacking a more formidable idea and one week into the project, the federal government decided to shut “down the dredging that was being done to create protective sand berms in the Gulf of Mexico.”

Louisiana’s Republican Governor Bobby Jindal staunchly supports protecting the coastline with a sandy barricade, which may explain why the “berm issue has created its own toxic friction between Louisiana and the Obama Administration.”

It seems that ever since Obama took over the reins of reason the government’s first-and-foremost effort is directed at implementing the illogical, obstructing progress and public wellbeing, and placing the vulnerable at risk.

Thus, while the duffer- president concentrates on sand bunkers on the golf course, the environmentally alert “Obama Administration has asked for a halt on dredging sand berms off the Chandeleur Islands … until the project can be relocated farther into the gulf.”

Federal costs, environmental concerns and efficiency are likely at the center of the controversy.  As a result, the coast of Louisiana is officially the first victim whose future is at the mercy of an Obama-style “death panel.” Bureaucratic technicalities will determine the extent of damage that will ensue before federal approbation either administers critical care, or just allows the patient to die – one or the other.

If Obama refuses to lift the ban on the dredging plan, Plaquemines Parish President Billy Nungesser might be the next one called in for a presidential reprimand for public insubordination.

Nungesser, “one of the most vocal advocates of the dredging plan, sent a letter to President Barack Obama, pleading for the work to continue.”  The outspoken sand-berm proponent claims, “Once again, our government resource agencies, which are intended to protect us, are now leaving us vulnerable to the destruction of our coastline and marshes by the impending oil.”

Billy Nungesser targeted Obama as the only “hope for continuing the work.” In an unforgiving dispatch Billy outlined viable options for the President to consider.  Nungesser begged, “Don’t shut us down, let us lay the pipe three miles out and then … move the dredge so we will be down less than a day and we’ll refill the hole.”

Nungesser reminded Obama of the “threat of hurricanes or tropical storms,” which would put the Gulf coast “at an increased risk for devastation … from the intrusion of oil.”

What Nungesser fails to grasp is how a hurricane or tropical storm coupled with tornadoes of spinning oil would be tailor made for an administration that cultivates and exploits any crisis that fortuitously comes along.