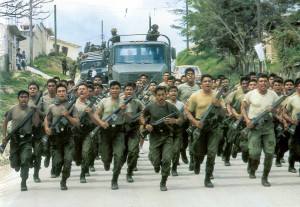 America is fast becoming the bastion of diversity.  We are a nation that celebrates the cultural kaleidoscope and broad spectrum of ethnicity that makes America great.

Take for example our Mexican neighbors.  Now that’s one fiery crew, so full of life, so zesty and determined. This particular group addresses issues in a way that is alien to American mores, but if integrated could benefit the overall fabric of the nation.  Truth is, drug and human traffickers, as well as illegal immigrants, exemplify the positive characteristic of unwavering determination.

If viewed in context, logic dictates that being courageous enough to illegally enter the U.S. exhibits a unique quality of purpose.  Understood in its complexity, crossing the border or fighting to escape poverty with an AK-47 and a machete could be a laudable characteristic if it means obtaining a better life for yourself and your family.

Recently, in an attempt to do the work “Americans won’t do,” job-seekers on the border of Arizona grappled for the chance “on one of the roads” that used to be a “relatively tranquil pocket of northern Mexico.” Activity there has been misconstrued as “a hotbed of drug-fueled violence on Arizona’s doorstep” when, in fact, it may merely be a creative attempt at accessing employment.

Regardless, the confrontation “between rival gangs competing for drug and immigration routes into the U.S.” is fueling Border State concern. Confusion comes into play when those in despair willingly take a desperate quest for work to another level.

Nogales… which shares a border with the Arizona city of the same name, has had 131 murders so far this year, nearly surpassing 135 for all of 2009…That includes two heads found … stuffed side by side between the bars of a cemetery fence.

The carnage… pales compared to other Mexican border cities, most notably Ciudad Juarez… across from El Paso, Texas, which had 2,600 murders last year.

While some define beheading as gruesome butchery, understanding is called for because hostility usually indicates lost hope and desire to break free of poverty.

Who can blame these people?  Sneaking over the border in some circles is considered a crime, as is holding up people at gunpoint, kidnapping or even murder. Yet, in essence, brutality could be a positive means to an end.  In fact, if anything, border circumstances have been made worse recently not by gangs, but by Arizona law.  The Grand Canyon State may very well be culpable for injecting desperation into an already tense situation by attempting to enforce the law.

Many Americans, especially in Arizona, refuse to consider the circumstances involved in a recent “shootout that left 21 people dead and six wounded on a road just a small distance south of Mexico.”  Eager to exercise racial legislation Arizona would be hard pressed to acknowledge that those involved likely were just attempting to assist the destitute in making a better life.

We must remember:  history tells us desperate people do desperate things.

Barack Obama’s refusal to acquiesce to Arizona’s “misguided legislation” is one gutsy move.  The president’s commitment to “fairness” could successfully quell the shooting, kidnapping, murder and beheading presently taking place on the southern border.

It may take Obama’s empathetic willingness to relinquish American sovereignty and the rule of law to turn the tide.  The President can then judge the success of immigration reform not by the cessation of fighting on the border, but rather by the detrimental effect Obama’s purposeful addition of unbridled lawlessness imposes on America.