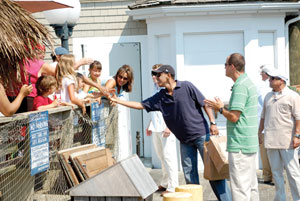 In response to having his vacation ruined by the Obamas’ visit to Bar Harbor, a young Maine vacationer lamented to his father “This is the worst day of my life.” You know what I say about that – “Too damn bad!”  It’s because of states like Maine full of hammered silver jewelry wearing, Greenpeace loving liberals that this imposter is president at all.

Now, after the entire nation is subjected daily to Obama disrupting lives and making it impossible for Americans to scrape together two nickels to go on vacation themselves, Maine is inconvenienced.  Tough!

Tourists couldn’t cross the sand bar over on foot during low tide to Bar Island.  Why did they have to wait for hours? Michelle was doing backstrokes in the Bar Harbor Club pool. That’s what happens when the Obama contingency decides to play tennis and take a dip in the pool, the sand bar walkway gets closed down.  “Sorry Maine, Barry and Michelle could care less about your vacation plans.”

What really matters though is “The first family seem to be enjoying the picturesque coastal New England town.  They’ve spent two days boating, sightseeing and partaking in the local delicacies lobster and ice cream… the president enjoyed a one-and-a-quarter pound lobster during Friday’s dinner.”

How reassuring.  The first family will be all rested up so Daddy can come back to Washington DC and continue to wreak havoc on the country.  Michelle, after exempting herself from her own standards by gorging on lobster, drawn butter and huge homemade ice cream cones, can carry on dictating to the rest of America what to eat and what to do.

Reports said other vacationers besides the little boy were discouraged by the limitations “posed by road blocks, traffic jams, and security lock downs.”  Yet there remained many left-wing “Maine loves Obama” types willing to endure being dismissed, hassled and literally disregarded as human beings because they were “excited by their close proximity” to the most self-absorbed human being in American presidential history. 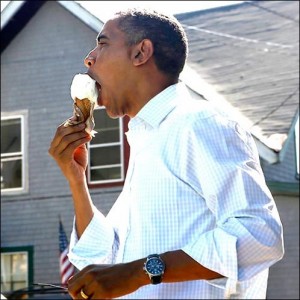 Question:  In eight years does anyone remember G.W. Bush ever instigating a bi-weekly media circus, or inconveniencing anyone while on vacation? How many pictures of George glomming ice cream cones are registered in the Bush archives?

According to the “Maine Revenue Services, 2009 was the worst tourism season on record for the state whose tourism season brings in $10 billion annually.”  In fact, “tourists aren’t coming in the numbers they did in 2008.” Someone should remind the Pine Tree State that 2008 was the summer prior to their helping to get Barry elected.  Immediately following the election, President Obama began alternating between vacationing and demolishing America, which in turn decimated Maine’s tourism industry.

Now, after taking a wrecking ball to Bar Harbor small business and tourism, Obama has the impudence to show up and disrupt everyone else’s vacation.

Likely the liberal local workers in Maine were buoyed by the president’s visit. The hope is Barry breathing Bar Harbor air will change a slumping tourism market. “We’re happy he’s here,” one waiter said, “anything that brings in money.” Liberals are so befuddled. They elect a president that obliterates their main source of income and then get excited when the Destroyer graces Maine with a disruptive visit.

Personally, I believe a six year old boy verbalized what a majority of Americans have come to realize since Obama came to town: this day and every day is the “worst day” of all our lives, and Maine, you’re partly to blame.

No wonder Obama encourages mooching…he’s a moocher himself!