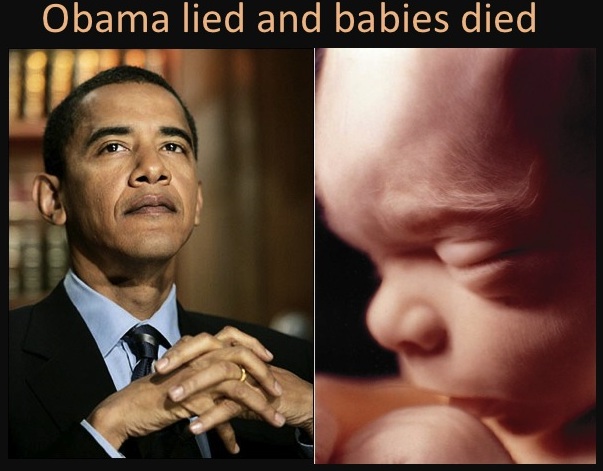 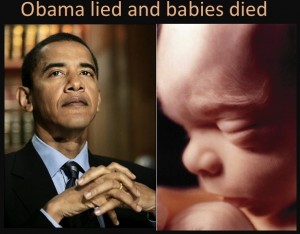 It’s hard to comprehend that intelligent people believe Obama speaks the truth. A simple question: If an individual encourages coldly tossing a barely breathing infant into a laundry room to die and uses the upholding of the original intent to kill the baby as an excuse, is it logical to assume such a person has a high regard for truth?

Barack Obama supports killing the unborn and if by chance the infant should happen to “burden the original decision of the woman and the physician to induce labor and perform an abortion” by refusing to die, Barry disagrees with providing a helpless being medical care. Plain and simple, Obama is cold and heartless.

If lying were an art, Barack would be its master.  Liberal pro-choice advocate Barack Obama “successfully opposed including language in the [health care reform] bill to prevent federal subsidies for abortions.” The President intended to quietly advance an “abortion-expanding agenda through administrative decisions.”

When it appeared a few sentimental pro-lifers jeopardized Obamacare, it didn’t take much to sway the easily fleeced Bart Stupak and seven left-leaning lackeys. In order to pass health care reform the President lied to gullible pro-life Democrats, signed a phony executive order, and swore health care would not fund abortion.

Obama might as well have pulled a dirty tissue out of his pocket, called it an executive order and after getting the credulous to agree, crumpled it up and filed it in the “easily deceived” category.

After health care reform passed, taxpayer monies are now going directly to abortionists in Pennsylvania to make sure murder is amply funded.  Under the new national government-run health care program, “the Obama administration will give Pennsylvania $160 million to set up a new “high risk” insurance program.” Named after pro-choice champions Pennsylvania Governor Ed Rendell and Health and Human Services Secretary Kathleen Sebelius, the program is called the Rendell-Sebelius plan, which is Obama-speak for taxpayer-subsidized abortions.

The Rendell-Sebelius federally-funded insurance program is being presented as monies to cover “preventative care, physician services, diagnostic testing, hospitalization, mental health services, prescription medications and much more.”  Get out a yellow highlighter and underline the words “much more.”

Let’s do the math. If all of the $160 million dollars go to fund first trimester abortions, which run about $350.00, it calculates to be 457,143 human beings successfully sluiced from society. If a meager $40 million dollars were spent to cover “any legal abortion…except sex selection,” that would assure nationalized health care 114, 286 fewer sick people to worry about, which would ultimately benefit the Obamanomic bottom line.

Besides the lies, Barry has, under duress, legally bound pro-life Americans to tax-tithe to the First Church of Obama’s most highly esteemed charity, government funded abortions.  If Barry gets his way, which he always does, regardless of religious affiliation or moral conviction Americans will fund feticide.

Obama claims when it comes to ending a pregnancy, “The decision generally is one that a woman should make.” Yet, the President’s dictatorial decrees deny choice to those who don’t support abortion.  Obama is intolerant toward conscientious objection and denies religious exemption. Barry’s policies force the resistant to hand the abortionist the suction and scalpel by financially aiding and abetting the executioner.

If America is in search of an apropos motto, here’s one that fits: Obama lied and babies died. The next time Barack finishes speaking and turns to walk from the podium, look closely, his pants are on fire.