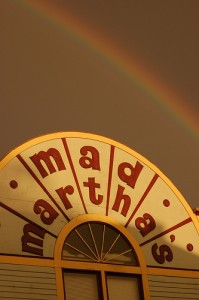 Fresh off a 26-hour Florida retreat, President Obama and well-rested jetsetter wife Michelle and daughters Sasha and Malia left for 11 days at Blue Heron Farm in Chilmark on Martha’s Vineyard.

This year the Obamas have decided to go low-key. As jobless claims rose to a nine-month high the President and First Lady, being acutely sensitive to the economic reality Americans grapple with daily, felt it fitting to tone down vacation costs. So instead of spending two weeks at a tony spot like Nygard Cay Beach Resort for $30,000 a day, the couple chose the empathetic route and rented the Blue Heron Farm again for the 11-day price of $30-35,000.

While away, the President is expected to work out as well as don fashionable Bermudas and saddle shoes to work “on his swing at Mink Meadows golf club.” White House spokesperson Bill Burton said, “There will be some hiking, some time at the beach” and Lord knows, “some time at the ice cream store – all the sort of things you do when you’re at Martha’s Vineyard. You enjoy the people and the good food.”

Sitting home on a rickety beach chair, in front of a noisy fan, grilling hotdogs on a makeshift grill, grateful Americans, across the fruited plain, want to wish the Obamas a lovely, restful time. In fact, two helpful suggestions for America’s very own Martha’s Vineyard vacationers are definitely in order.

Biking aficionados would be remiss if the bike trail at “historic” Chappaquiddick was overlooked as a pedal-around site. However, the first suggestion comes with a warning: Barry and the girls should be aware that things do get a bit dicey along Poucha Pond, “a body of water that extends from famous Dike Bridge.” The first family should be careful making the famous Teddy-turn, so as not to end up in a “marshy pond” that the late Senator knew full well “doesn’t appeal to bathers.”

By now all America is well aware that when it comes to staking out ice cream, the Obamas need no direction. Last year, Dad bought the girls frozen creamery at Alley’s General Store. So it is fitting in light of the country’s general mood that as a second suggestion the President should check out “Mad Martha’s.” The mad menu at Martha’s includes: “Pig’s Delight,” which is traditionally ordered with an “oink.” The “Pig’s Delight,” is a12-scoop-frozen-oink-fest that can handle a crowd, as well as feed a family of four who really, really love ice cream.

Barack Obama landed in the affluent playground of Martha’s Vineyard as the unemployment line swelled to record lengths. Yet hope prevails that this year the POTUS will be spared ill-timed deaths and inconvenient crises similar to those that last summer beckoned America’s vacationing President away from the pressing business of whiling away the time and perfecting his golf swing.