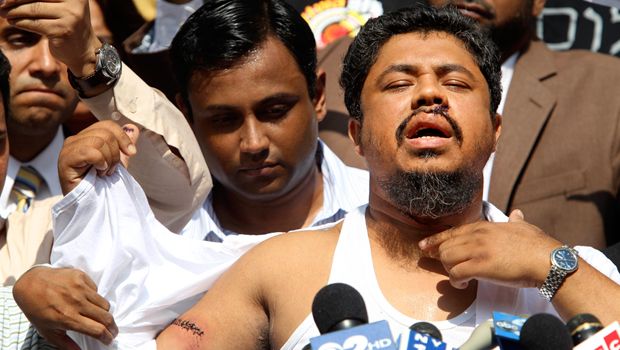 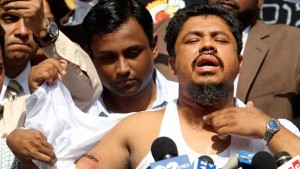 The hate crime accusers are on the march.  What could be better than a WASP psychopath with one too many Budweisers under his cowboy belt slashing a Muslim cab driver just as the 9-11 mosque controversy came to a rolling boil in New York City?

Muslim cab driver Ahmed Sharif picked up a very thirsty American student and, as a result, one unsuspecting Muslim nearly became a statistic.

Apparently, after imbibing numerous alcoholic beverages, Michael Enright felt obligated to embark upon a personal Checkered Cab Crusade, slashing a taxicab driver in the neck and upper lip in what is being reported as an “explosion of anti-Muslim violence in the close confines of [a] New York City taxi.”

Victim-cabdriver Ahmed shared the horror story: “I’m driving. He asked me where I’m from. I said Bangladesh. Second question he ask me, are you Muslim? I said yes. Then he tells me ‘assalamu alaikum,’” Sharif said.

A pattern is emerging: Arabic terms like “Assalamu alaikum” and “Allahu akbar” seem to be the war cry of hate mongers as faraway from New York City as Ft. Hood, Texas.

Sharif said Enright began “ridiculing the Muslim holiday of Ramadan and then started a bizarre, belligerent rant.” Enright allegedly said, “This is checkpoint [expletive]. I have to put you down.”

Then the honor student/Afghanistan reporter from Putnam County “lunged through the cab partition with a knife.” As Ahmed struggled, the cab rolled for two blocks. “The knife came here and when he knife like this by his right hand then I back up like this, then it come here,” Sharif said, showing defensive arm wounds.

Police claimed an under-the-influence Enright lacerated Sharif with a Leatherman military knife. Eventually, the drunk was arrested and charged with “attempted murder as a hate crime.”

In a climate described as “anti-Muslim,” and based on objections to a mosque being erected near Ground Zero, why is a singular act of asinine behavior on the part of a frat-boy with a history of alcohol abuse being called an “explosion” of anti-Muslim sentiment?

As the taxi fracas ensued, instead of exiting the cab, a bloodied Sharif decided to lock the inebriated Enright inside the vehicle.  The injured cabbie chose to shuttle a person dead set on murdering Muslims around town until finding a police officer?  What happened, did Enright black out in the back of the cab?

Javaid Tariq of the New York Taxi Workers Alliance is convinced the incident is a hate crime. “It is not any robbery or fare dispute or anything else. Talking to him, asking him if he’s a Muslim? Telling him, it’s a checkpoint and stabbing him. Of course it’s a hate crime,” and a conveniently timed hate crime at that.

Ahmed Sharif may have been sliced up by a drunken lout just in time to convince Americans that the only way for the nation’s anti-Muslims sentiment to be breached is by building a 15-storey mosque next to Ground Zero.