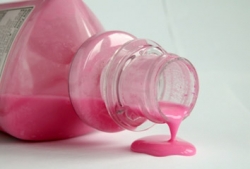 Two American citizens, not on the terror watch list, one from Yemen the other from God knows where, were arrested by Dutch police in the Netherlands after being taken off a Chicago-to-Amsterdam United Airlines flight.

A minor point that should be a comforting bit of information for all air travelers is that the two made it all the way to Amsterdam  “despite security concerns surrounding one of them.”

Alert security screeners in Alabama stopped al Soofi.  The Yemen born world traveler was referred to additional screening because of  “bulky clothing… $7,000 in cash and a check of his luggage [which] found a cell phone taped to a Pepto-Bismol bottle, three cell phones taped together, several watches taped together, a box cutter and three large knives.” Good catch!

However, Pepto/cell phones, taped watches and deadly weapons does not necessarily  indicate al Soofi had nefarious intentions. So, after  offering Ahmed a heartfelt apology al Soofi’s luggage was “cleared for the flight from Birmingham to Chicago O’Hare.”

Once in Chicago, officials say they learned al Soofi checked his luggage on a flight to Washington’s Dulles airport for connections on flights to Dubai and then Yemen.  On small problem: Ahmed was not on board the flight.

Instead, officials say, al Soofi  joined a second man, Al Murisi.  The duo boarded a United Airlines flight from Chicago and were en route to the land of windmills, wooden shoes and tulips.

When Customs and Border officials learned al Soofi was not on the flight from Dulles to Dubai, the plane was ordered to return to the gate so his luggage could be removed. Officials said additional screening found no evidence of  actual explosives.

According to the U.S. law enforcement officials Dutch authorities detained the two men when the United Airlines flight landed in Amsterdam.

Ever cautious about accusing terrorists of terrorism, ABC News reporter Brian Ross expressed the opinion that, although suspicious, “there may be a perfectly innocent explanation,” for the incident.

Which is true, Mr. al Soofi and his traveling companion, al Murisi, may have just been bringing supplies to a friend suffering with chronic indigestion.  Like two good Samaritans, al Soofi/Murisi could have been attempting to attend to someone who, after calming his or her stomach, also enjoyed chatting on cell phones and whittling with a box cutter, while keeping a watchful eye on the time.

As for the boarding the wrong flight aspect of the situation the two merely could have gotten confused at the airport trying to read confusing directional signs that, to date, a discriminatory, Islamophobic America has yet to convert to Arabic.