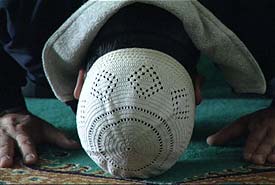 Over the years the state of Connecticut, as well as most other public venues, have banned prayer based on a Jeffersonian reference to the “wall of separation” as it applies to church and state. Who would have thought that the impetus for enforcing a purely secular environment at Hartford City Council meetings wasn’t to protect the state from religious interference, but rather the absence of a religion the Nutmeg State’s capital found tolerable.

Although Hartford City Council meetings “don’t regularly begin with any form of prayer,” the Common Council has decided to act on behalf of “solidarity,” not with traditional Judeo-Christian faiths, which thus far have been anathema, but rather with Islam. In September, the New England town of Hartford has invited “local imams to perform Islamic invocations at the beginning of the Council meetings.”

The Hartford City Council weighed in on the 9-11 mosque issue and registered condemnation of mosque disapproval by exclusively tolerating Muslim prayer alone.

Based on the contents of an email sent to Council members the imam-invocation pronouncement has little to do with faith and everything to do with political conviction. The email outlined the objective of the decision: “One of the goals of the Council is to give a voice to many diverse peoples of the City, which is especially important given the recent anti-Islam events throughout the country.”

The Council makes available “voice,” time before meetings, but to no other creed besides the current religion liberals observe by offering indulgence in the form of Islamic apologetics.

It’s likely that when liberals disallow traditional prayer from being recited at public meeting the action is applauded as “an important move.” Embracing secularism is viewed as a necessity made to protect American citizens from the offense that comes from the puritanical, restrictive tenets of the Judeo-Christian belief system.

Suddenly, having imams lead public Muslim prayer, in a taxpayer-funded environment, is viewed as an “important move” by Council President rJo Winch who said, “I feel it is very important that, as a Council, we project a culture of inclusiveness in the City of Hartford. Too often, our differences divide us. In my opinion, it is our combination of differences that make us strong.”

Thus, the Hartford City Council has decided to celebrate the “combination of differences” and will do so as long as spiritual disparity and religious inclusiveness is represented only by a controversial-minority religion practiced solely by Muslims.

**On Facebook, Council Minority Leader Luis Cotto wrote:  “We start every single council meeting with a prayer.  99% of the prayers are Christian based, and in three years I recall one Rabbi coming through.”