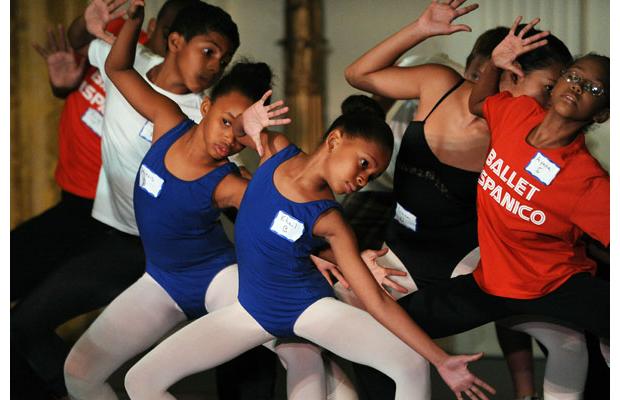 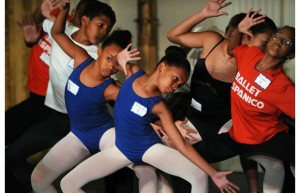 Speaking of stimulus, obviously Michelle Obama requires bi-weekly cultural stimulation. Nary two weeks pass without some kind of exotic excursion or home-based gala.  Every star-studded occasion is couched in the guise of providing some sort of national benefit, but in actuality ends up supplying dazzling amusement for an obviously bored First Lady.

This week, while unemployed Americans donned sackcloth and ashes, Michelle deemed it fitting to host a celebratory dance party. Breaking tradition with Conga night, typically scheduled for Wednesday, the event was scheduled on a Tuesday.

As Americans traded double-ply cardboard for shoe soles, “dancers of all types – ballet, modern, hip hop and Broadway” were jumping and jiving at the White House in everything from spiffy leather tap shoes to pink satin pointe slippers.

The festivities started with students from “dance schools around the country: The Alvin Ailey School, Ballet Hispanico, Cab Calloway School of the Arts, Dance Theatre of Harlem, [and] the Chicago Multicultural Dance Center.” The handpicked hoofers participated in an afternoon workshop hosted by some of the biggest names in dance.  After a sweaty practicum, students saw “mentors perform in an hour-long, star-studded show.”

“Broadway’s young ‘Billy Elliot’ was there.” Billy brought with him a timely message of how economic hardship; personal struggle, one-parent families, and union strikes can catapult even the most reluctant boxer into the lead role in Swan Lake.

The British boy in a tutu, though thrilling, was not the main event.  Besides boogie aficionado, Michelle, the foremost luminary of the evening was the artistic, soon-to-retire director of the renowned African-American Alvin Ailey Dance Company and official dance party honoree, Judith Jamison.

When asked about bringing dance to 1600 Pennsylvania Avenue Judith gushed, “What a rare opportunity, to be invited by your country’s first lady to be honored like this,” which is exactly what Anita Blanchard said en route to Costa del Sol.

Jamison went on, “I’ve been to the White House a couple of times before, but this event is totally unique. It’s so terribly important to recognize this art form and to understand how important it is to the fabric of this country.”  It’s unique all right, especially because in a time of national crisis the First Lady chooses to focus on pirouettes.

Jamison sermonized, “This will be another clarion call to people: Pay attention to your arts!”  Art awareness is certainly the clarion call beckoning Americans like the undermanned guards on the Arizona border dealing with the creeping invasion of violent drug cartels.

Dance world icon Jamison, as a living illustration of the emotional state of every American living beyond the perpetually jovial White House walls, should have agreed to grace the makeshift stage with an improvised rendition of her “unforgettable 1971 solo piece ‘Cry‘.”

In less than two short years, the Obamas successfully ran the gamut from “Latin music, rock, jazz [and] country” to “classical and Broadway show tunes.” Who can forget Barry and Thalia burning up the rug at Fiesta Latina, a salsa-spectacle that left “dance fan” Michelle less than overjoyed?

Nevertheless, there is little doubt the latest eclectic White House party was both dignified and Michelle-approved, especially if fleet of foot Barry joined the corps de ballet troupe, demonstrated a Muslim-friendly Arabesque or chose to fly in trusty dance partner, Ellen DeGeneres.