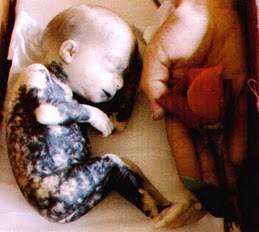 In the mid 1980’s, Melody and the late Keith Green traveled the United States with Last Days Ministries, accompanied by a guest of honor named Baby Choice.  Baby Choice was a tiny girl with wisps of red hair on her head complete with apricot eyelashes and eyebrows. In a glass coffin shared with only a single red rose, a perfectly formed Baby Choice was frozen forever in the fetal position.

Baby Choice’s face was reminiscent of a small baby doll. After 4 months’ gestation, the only imperfection on the child’s frail frame was charred paper-thin skin that covered her body from her neck to her ankles. Skin as thin as tissue paper was scorched with deep, blackened burns, the result of a saline abortion that blistered its way through tender skin after 16 weeks in her mother’s womb.

Thirty years later, the impression of the greatest injustice mortal eyes ever beheld, trapped within a glass shoebox, is an indelible image seared within my mind.

Of late, it has been revealed that a criminal-abortionist named Kermit Gosnell hoarded a gruesome collection comprised of  “dozens of apparently late-term unborn children who were killed in abortions as long ago as 30 years ago.”

The Philadelphia offices of Gosnell were raided earlier this year after a woman was injured during an abortion performed in a clinic said to be “deplorable and unsanitary.” Shocked authorities reported, “There was blood on the floor, and parts of aborted fetuses were displayed in jars.”

What is more shocking is the level of shock. What do people think an execution site is? Shangri-La?  Since when do murderers, in an effort to preserve and protect life, assure sterile surfaces?

Besides storing dead infants in jars, Kermit Gosnell has a history of women dying at his hands. Marie Smith is one woman who survived a Gosnell-administered botched abortion.  After allowing Kermit to execute her unborn child, Smith “developed a high fever and slipped into unconsciousness a week after her abortion. She was rushed to the hospital where the source of her condition was confirmed.”  Apparently, “X-rays indicated [Gosnell] left an arm and a leg inside.”  After the fact, X-ray images exposed Marie to the reality of the “amorphous” arm and leg that were left behind in her womb.

Besides unsanitary conditions and women dying from massive drug overdoses and sepsis, Gosnell has also been the subject of lawsuits, including an incident involving a 13 year-old girl who obtained an abortion by Gosnell without the required parental consent.

Twenty years later, the woman involved in the underage abortion claims “she could see bottles and jars filled with the remains of ‘little babies’ and that after her abortion she saw Gosnell cradling a bottle that contained the remains of her fetus.”  Apparently, after a fatherly Gosnell pulled infants limb from limb, the late-term abortionist coddled dismembered bodies stuffed in jars, in a macabre effort to ease a seared conscience.

On the Last Days Ministries website, a woman working in an abortion clinic, struggling with the moral aspects of late-term abortion, explains her own abortion epiphany:

I looked inside the bucket in front of me. There was a small naked person in there, floating in a bloody liquid.

He was purple with bruises and his face had the agonized tautness of one forced to die too soon. I then took off the lids of all the buckets and with a pair of forceps lifted each fetus out by an arm or a leg—leaving, as I returned them, an additional bruise on their acid-soaked bodies.

Finally, I lifted out a very large fetus and read the label—Sex of the item: Male; Time of gestation: 24 weeks (six months)… So, this was Master Atkins—to be burned tomorrow—for the sake of his mother.

Storing dead fetuses in Ball Mason jars is not exclusive to the perverse Kermit Gosnell.  More recently in Maryland, Drs. Steven Brigham and Nicola Riley were “ordered to stop practicing abortion” after a woman was severely injured submitting her unborn child to a brutal execution.

Much like the Gosnell treatment center in eastern Pennsylvania, Brigham and Riley’s clinic was raided. Police “searching for medical records…to their horror…discovered dozens of unborn babies stored in a freezer.”  Authorities also found “frozen aborted fetuses and medical-waste records showing fetal ages up to 36 weeks. (A pregnancy is considered full-term at 38 weeks).”

Baby Choice was a heartrending memorial to a life never lived. Yet aborted fetuses, whether treated with reverence or stacked on a shelf as human refuse, guarantee to deliver a life-changing message.

Almost forty years after Roe v. Wade became law, America continues to justify the unfettered murder of a generation of never-to-be-born children.  However, keeping the remains of aborted fetuses interred in glass could end up providing a life-saving tool.  Pro-choice America is overdue for another countrywide tour starring jar after jar of Baby Choices, collected from abortion clinics all over the nation.