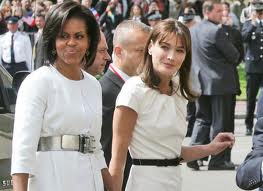 Michelle Obama is used to having girlfriends like Anita Blanchard and Oprah Winfrey, BFFs who keep confidences and never divulge a surreptitious word. It would be better if Michelle avoided make-believe confidantes who lend an ear one day and then make public the First Lady’s dissatisfaction with Barack’s choice of employment the next.

Yet that is exactly what happened. Mrs. Obama lost her head during a tête-à-tête with French President Sarkozy’s wife, ex-model/singer-songwriter/rock star Carla Bruni.

It happens to the best of them.  It starts with a “faire la bise,” a glass or two of 2005 Hugel “Tradition” Pinot Gris and before you know it, First Ladies are confiding secrets better left unsaid.

Supposedly, in March the Sarkozys dropped by 1600 Pennsylvania Avenue for a leisurely supper. What supposedly unfolded was Michelle letting her guard down.  According to an unauthorized book entitled “Carla et les Ambitieux,” Carla and Michelle were “purported to have had a conversation in English in which they compared notes on their experiences as wives of presidents.”

It’s easy to imagine Carla looking around the historic trappings, chattering away making girlish small talk, asking Michelle, “So, how’s life here at the White House?”  A question to which the First Lady allegedly replied “Don’t even talk to me about it, its hell. I can’t stand it.” Obviously, Mrs. Obama never suspected off-the-record pre-dinner banter would end up chronicled in a tabloid-style book, but it did.

Now spinmeisters, none of whom was privy to the conversation, swear the First Lady never said such a thing.  Moreover, and on behalf of Carla Bruni-Sarkozy, the French Embassy in Washington DC also swears that France’s First Lady “distances herself completely” from the book.  So far, the Embassy has not commented as to whether Carla also “distances herself completely” from having heard Michelle utter those words.

The book’s author, Yves Derai, claims Michelle’s confession, as well as all of “Carla and the Ambitious Ones” subject matter was “based on interviews with ‘reliable sources’ – though [Yves] declined to name them.”

Derai explained that going from French to English oftentimes causes original intent to be misconstrued. Derai clarified that the word “hell” in French is “enfer.” Yves said, “I don’t know, maybe translated into English, hell is Dante’s Inferno where they burn sinners, but in French it’s really a rather common expression to say that sometimes it’s just ‘a real drag.'”

Derai downplayed the uproar, saying “in terms of interpretation I think the Americans are overanalyzing this. It was an exchange that was in a jokey tone, not serious. It was an informal dinner, relaxed.”

How expedient for a White House under siege that it took a French journalist to come up with a perfect alibi for America’s disgruntled First Lady.  After the fact, Michelle can argue the notorious reply to Carla’s question was not in secrecy, nor under her breath, but delivered tongue-in-cheek.